The occasion of Abraham Lincoln’s leaving for Washington, D.C., on the morning of Feb. 11, 1861 inspired an eloquent farewell to Springfield. Made from the rear of the train to an estimated 1,000 of his friends and neighbors, the speech spoke affectionately of its author’s home town. It is generally listed among Lincoln’s most accomplished later works. 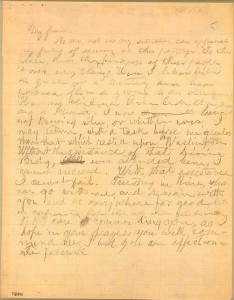 The Lincoln/Nicolay version of the Farewell Address

The Farewell Address exists in several versions. Knowing exactly what Lincoln said on public occasions is often not clear. His remarks either were not written out beforehand, or were not delivered exactly as written out, or were based on speech drafts that have been lost. Often such speeches survive only because they were recorded stenographically by reporters or were reconstructed from memory by witnesses.

In his book, The Eloquent President, Rodney O. White notes that newspaper correspondents present on the Presidential train began to ask Lincoln about the speech soon after the train left the depot. To accommodate them, Lincoln began to write down what he had said from memory, but the movement of the train made that difficult, and after a few sentences he handed the paper to his secretary, John Nicolay, and dictated the remaining text to him. (That text is in Library of Congress.)

Back in Springfield, a reporter for the State Journal had jotted down what he heard of the speech. This version was printed in the next day’s editions of the paper.

A third version, published in Harper’s Weekly on February 23, 1861, also was based on a transcription of the address made as it was delivered. This third version also appeared in various Eastern newspapers and was circulated as a broadside.

This version of the Farewell Address is considered the standard one. It appears at Lincoln’s Tomb State Historic Site and at the present Illinois Statehouse. Roy Basler, editor of the Collected Works of Abraham Lincoln, observed that most of the improvements in this more considered version compared to the other versions—the enhancement of the alliterative sequences and the stronger rhythm pattern–are “entirely in keeping with Lincoln’s usual practice.”

My friends. No one, not in my situation, can appreciate my feeling of sadness at this parting. To this place, and the kindness of these people, I owe everything. Here I have lived a quarter of a century, and have passed from a young to an old man. Here my children have been born, and one is buried. I now leave, not knowing when or whether ever I may return, with a task before me greater than that which rested upon Washington. Without the assistance of that Divine Being who ever attended him, I cannot succeed. With that assistance, I cannot fail. Trusting in Him who can go with me, and remain with you, and be everywhere for good, let us confidently hope that all will yet be well. To His care commending you, as I hope in your prayers you will commend me, I bid you an affectionate farewell.

Friends, no one who has never been placed in a like position, can understand my feelings at this hour, nor the oppressive sadness I feel at this parting. For more than a quarter of a century I have lived among you, and during all that time I have received nothing but kindness at your hands. Here I have lived from my youth until now I am an old man. Here the most sacred ties of earth were assumed; here all my children were born; and here one of them lies buried. To you, dear friends, I owe all that I have, all that I am. All the strange, chequered past seems to crowd now upon my mind. Today I leave you; I go to assume a task more difficult than that which devolved upon General Washington. Unless the great God who assisted him, shall be with and aid me, I must fail. But if the same omniscient mind, and the same Almighty arm that directed and protected him, shall guide and support me, I shall not fail, I shall succeed. Let us all pray that the God of our fathers may not forsake us now. To him I commend you all—permit me to ask that with equal security and faith, you all will invoke His wisdom and guidance for me. With these few words I must leave you—for how long I know not. Friends, one and all, I must now bid you an affectionate farewell.

My FRIENDS,— No one not in my position can appreciate the sadness I feel at this parting. To this people 1 owe all that I am. Here I have lived more than a quarter of a century~ here my children were born, and here one of them lies buried. I know not how soon I shall see you again. A duty devolves upon me which is, perhaps, greater than that which has devolved upon any other man since the days of Washington. He never would have succeeded except for the aid of Divine Providence, upon which he at all times relied. I feel that I can not succeed without the same Divine aid which sustained him; and in the Same Almighty Being I place my reliance for support, and I hope you, my friends, will all pray that I may receive that Divine assistance, without which I can not succeed, but with which success is certain. Again I bid you all an affectionate farewell.

The Eloquent President: A Portrait of Lincoln Through His Words by Ronald C. White, Jr. Random House, 2005

This entry was posted in Lincoln, Abraham and tagged Lincoln Depot, Lincoln speeches. Bookmark the permalink.