The Nov. 26, 1930, robbery of the Rochester State Bank quickly became a Bonnie-and-Clyde-style affair, complete with a car chase in which the robbers’ car was riddled by shots from a police officer’s submachine gun.  “Four bandits are nabbed on a girl’s tip,” blared the next day’s banner headline in the Illinois State Journal. 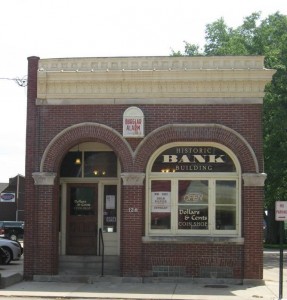 The sensational events actually began in Kincaid, where four “business-like” robbers — one carrying what the newspaper described as a light machine gun — held up the Kincaid Trust & Savings Bank about 10:30 a.m. The four, along with a fifth man who stayed outside with the group’s cars — a green Hudson (said later to be bullet-proof) and a rumble-seat Ford — escaped with $3,000 in cash and $2,000 in travelers checks.

The gang apparently drove west to Rochester, where three men carrying pistols entered the State Bank of Rochester about 11 a.m. They drove off with another $3,000 in cash and the bank’s cashier, J. Earl Bell, whom they released a few blocks away.

The Kincaid robbers had disconnected that bank’s telephone, but word of the crime had been sent to Springfield by telegraph, and Springfield telegraph operator Sophie Tuczkus alertly notified city police that the robbers might be heading toward Springfield.

Springfield Chief of Detectives C.W. Jesberg and Patrolmen Louis Redpath and Primm Estill drove east of town on the South Grand Avenue Road, where they came upon a Chrysler sedan whose driver — a known police character named Frank Martini — claimed he was having engine trouble. Primm took Martini to the police station for questioning. The Journal described what happened next.

About five minutes later a Ford sedan traveling at a rapid rate of speed enroute to Springfield passed Jesberg and Redpath. The two officers took after the machine, in which three of the bandits were riding.

As the bandits’ machine neared Fifteenth street on South Grand avenue, they almost struck an Illinois Power bus and were forced to turn out of the way, running up over a curb.

The bandits, realising that the officers were following them only a short distance behind, turned north on Fourteenth street.

Jesberg sitting in the rear seat of the machine told Redpath to drive to the opposite side of the street, while he leveled a sub machine gun on the bandit’s car. After firing several shots through the machine and wounding two of the men, the driver …  pulled his automobile over to the curb near the Cook Street intersection.

Police later claimed Martini had been waiting with the Chrysler so the robbers could switch cars. The Ford had been reported stolen in Chicago the day before. The loot taken in Rochester was found in the car, police said, along with three .45-caliber revolvers.

The three men arrested in the Ford — Jack McCoy, Arthur “Archie” Brown, and Ted Patterson — were eventually sentenced to between one year and life in the state penitentiary for the Rochester stickup. A Sangamon County grand jury refused to charge Martini with being part of the holdup gang, and he was released from jail — but police immediately ordered him to leave town.