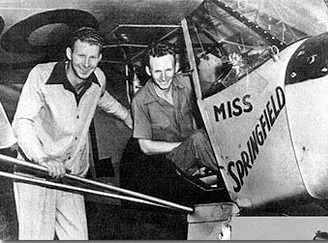 Brothers Hunter and Humphrey Moody beat the world record for endurance flying in a light aircraft — nearly 344 hours — in July and August 1939. The brothers, who lived in Dalton City, set the record flying out of Springfield in their 55-horsepower Taylorcraft, the “Miss Springfield.”

The Moodys left the Springfield airport (the field off Chatham Road later known as Southwest Airport) shortly before 3 p.m. Sunday, July 23, 1939, and were forced down by an electrical storm at 10:46 p.m. Aug. 7.

The Moodys’ main headache apparently was refueling, which they accomplished by flying low and dropping a rope to a truck traveling about the same speed (70 mph). A can of gasoline was attached to the rope and then pulled back up to the plane. The flight required 739 refueling passes.

Meals were made by Hunter’s wife, Dorothy, and hoisted to the plane using the same procedure.

“I could always tell when they were hungry, because they would begin circling their plane near the airport,” she told a celebratory Rotary luncheon following the flight. “You know, just like a flock of buzzards circle around.”

The two took turns sleeping on a six-foot by 18-inch mattress in the rear of the plane. At the end of the flight, their legs weakened by two weeks of no excercise, the Moodys had to be helped off the plane to waiting automobiles.

The Moodys’ closest call occurred during a refueling pass.

The flyers also nearly crashed in a cornfield … when the rubber band holding the parachute to a gasoline container snapped as the can was being hoisted to the plane. The parachute filled immediately, flapped back, and became entangled in the tail elevator. The plane was pulled downward. After battling with the controls, the flyers shook off the rope, can and ‘chute and they dropped into a cornfield.

On July 31, in another refueling mishap, the right door of the cabin was torn out of Humphrey’s hand and bounced back to the wing, tearing two holes in the wing fabric.

Because Springfield was their refueling point, the brothers never strayed from central Illinois. Their itinerary had a schedule, taking the Taylorcraft to Jacksonville by way of New Berlin every day about noon and visiting other area cities — in an area generally bounded by Mason City, Litchfield, Taylorville and Jacksonville — on a semi-regular basis.

The brothers became flight instructors as World War II approached, and both later joined the British Royal Air Force. When Richard Nixon first ran for president, the Moody brothers were his campaign pilots.

The Moodys were named to the Illinois Aviation Hall of Fame in 2003.