The high point of Ku Klux Klan activity in Sangamon County probably was a parade from the Statehouse to the Illinois State Fairgrounds on Oct. 11, 1924. 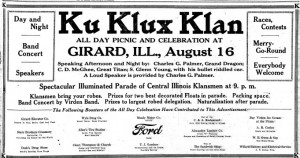 About 2,000 Klan members participated in the march, the Illinois State Journal reported the next day. Supporters lined Springfield streets, and the fairgrounds Grandstand was standing room only.  The newspaper estimated the Springfield contingent at 400 and reported that the local Klansmen had built three floats: one calling for the closure of Ellis Island, a second picturing a crucifix and the third declaring, “‘The public school system is good enough for us.” (Catholics, many of whom were immigrants, were primary Klan targets at the time, and the float reference to public schools was an oblique attack on the parochial school system.)

Describing the scene, the newspaper said:

Flaming torches, flags and the white uniforms made the parade a most picturesque event. Thousands of people, many of whom applauded the marchers, lined the sidewalks and crowded into the street.

Two crosses were lighted at the speakers’ stand at the fairgrounds. …

“The group mind must rule,” (Klan imperial wizard H.W. Evans of Texas) said, “and this group must be 100 percent American. We have foreigners who think they are faithful to our country, but they are not. They came here dissatisfied. Their instinct is for their own country. They look upon America as a glorified Italy, a glorified France, Germany, England or whatever country they came from.”

Several large Klan gatherings were held in the Springfield area in the 1920s, most featuring parades, cross burnings and secret rites.

“They used Springfield for kind of a central meeting place,” Springfieldian J.R. “Bud” Fitzpatrick (1895-1982) told Rich Shereikis in 1980 interviews for the Oral History Project at the former Sangamon State University. “… (I)t was common for excursion trains to come in to the railroad stations like particularly the Alton Railroad at Third and Washington. And they would drop off and they formed their parades here after joining with the local leaders.”

However, Springfield experienced no Klan violence, Fitzpatrick said. “It was just a case of an exhibition, of showing their strength through their uniforms and so on. But they never got down to where they hurt anybody.”

Most Klan antipathy in central Illinois was aimed at Catholics, not African Americans, Fitzpatrick added.  “The blacks were almost totally immune from the deal.”

The Klan apparently organized in Sangamon County about 1921, despite a strongly worded editorial the Journal published on June 5 of that year.

It is a rare and raw impudence these men exhibit in coming into the home of Abraham Lincoln, and attempting to plant here the seeds of this obnoxious, trouble-breeding and terror-inciting organization. …

You will be told the Klan has reformed and has reorganized and is lawful. You will be shown the beautiful sentiments it endorses, but the fact remains that it has retained the name of terrorism and, no doubt, for a purpose. It hopes to rule and dominate the community through fear of its old reputation.

Central Illinois had seen an influx of immigrants over the preceding several decades, apparently making Klan membership appealing to nativist whites, and the area Klan grew rapidly at first.

More than 185 men were initiated into the local Klan chapter — named, apparently unironically, the Abraham Lincoln Council No. 3 —  during ceremonies held near Auburn in September 1922.  A May 1923 ceremony at the fairgrounds installed 650 more Klan novices, although newspaper coverage doesn’t make it clear whether all were from central Illinois.

The 1923 ceremony, performed before a claimed 6,000 viewers, was ornate (although the newspaper description was badly spelled):

Two hundred and fifty guards, some of whom were wearing sidearms, were stationed at various points on the grounds while the ritual was performed in the coliseum about an altar in the center of the building.

This formed the “klavern.” A flaming cross of Cavalry (sic), fourteen feet high and six feet wide, burned above the altar. This light was supplemented by a small burning cross carried by the “knighthawk” who lead (sic) the candidates in single fire (sic).

Those initiated marched in this fashion in an open square formed by the members. Certain persons were designated as “stations” and from each of these the prospective knight received his instructions in klandom.

The altar was draped with a large American flag and upon it was an open Bible.

About half of the crowd were Springfield residents. Most of the others were from nearby cities although a great many were from distant parts of Illinois.

By the time of the 1924 parade, however, local Klan operations already were showing signs of stress. Illinois’ statewide Klan office had filed suit in March to suspend Grand Titan Charles Wanless and 12 other members of the Springfield Klan council. The dispute apparently started when the Springfield group objected to a state Klan-backed nominee to the Illinois Supreme Court; the Sangamon County insurgents  said the man “had opposed the Klan in every conceivable way.”

Meanwhile, the board of Pleasant Plains Christian Church previously had fired pastor A.W. Williams after Williams delivered a Klan lecture from the church pulpit. The dispute went public shortly after the parade, when Williams went to court to collect his back pay (he contended the lecture had been given “with the consent and at the request” of the church board).

Whatever the merits of the lawsuit, which the ex-pastor ultimately won, Williams clearly thought his Klan status was attractive to some parishioners. According to a Journal report on the trial:

Considerable merriment was evoked when six flowery, lacy valentines, bearing the signature “Your Little K.K.K. Preacher,” and directed to a half dozen women members of the congregation, were introduced as evidence under the heading of exhibit B. Mr. Williams admitted sending the valentines.

The Klan continued to hold major events in Springfield as late as 1926 — another massive rally at Camp Lincoln that August culminated in the burning of an 80-foot-tall cross, the “largest fiery cross ever built in Illinois.”

By then, however, the Klan in the northern U.S. was disintegrating as a result of scandals involving Klan leaders, and news about Klan activities virtually disappears from Springfield newspapers from 1927 on.

Klan associations also became unsavory for state politicians. Before the 1928 Republican primary election, incumbent Gov. Len Small and his opponent, Secretary of State Louis Emmerson, traded charges over whether either had provided support for the Klan’s 1924 parade.

Aides to Small produced affidavits denying that his administration had allowed Klansmen to ride Illinois National Guard horses in the parade. “The robing of the Ku Klux Klan … took place on the grounds surrounding the capitol and Centennial buildings, which are under the control and jurisdiction of Secretary of State Emmerson,” the Small campaign said. (Emmerson went on to win the primary and then the general election; he served one term as governor.)