Note: This entry has been edited and expanded.

In 1875, Rudolph Herman “R.H”. Armbruster broke away from his family’s jewelry business to open a store that sold awnings and upholstery. From that small store, Armbruster’s descendants would grow the business into one of the few remaining custom tent companies in the United States.

R.H. Armbruster (1852-1922) was born in Baden, Germany, the eldest of the five children of Alphons and Julia Vaeth Armbruster. The family emigrated to Ohio before the Civil War. Alphons (he later spelled his name Alphonse) moved the family to Springfield about 1855 and started a jewelry store. Julia Armbruster died in 1867; Alphonse then married Lena Dauchert and fathered four more children.

By the 1870s, Alphonse Armbruster was a prominent jeweler. He and his son Otto operated a store on North Fifth Street. Otto took over the business around 1904. Alphonse’s youngest son Ernest worked in the jewelry trade, and another son, Julius, became sales manager of the Illinois Watch Company and reportedly “grew the company from 50 watches per day to 1,000 watches per day under his leadership.”

R.H., however, at age 23, opened a small upholstery and mattress workshop. At the time, there were at least six other upholsterers in the city.

R.H. Armbruster’s first shop was at Sixth Street and Capitol Avenue, but he moved several times around downtown Springfield. In 1901, a spectacular fire gutted the firm’s three-story location at 307 S. Sixth St., forcing R.H. to pull up stakes again. Armbruster’s office and workshop moved to the 400 block of South Fourth Street about 1908 and stayed there for more than 60 years.

Early on, to accentuate the feather goods he manufactured, Armbruster used the slogan “Sign of the Swan.” For a time, as an attention-getter, he perched a live swan above his shop door. According to a family story, the swan dropped more than its feathers upon the heads of customers, so a wooden sign with a picture of a swan replaced the real thing. 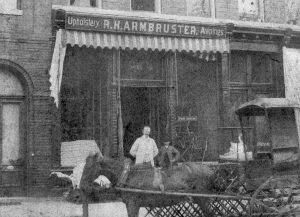 Sometime in the 1880s, R.H. Armbruster became acquainted with the Florida-based “canvas man” of the Ringling Bros. Circus. Armbruster Manufacturing was born from that encounter, as the firm became engaged in the design, fabrication and renting of circus tents, in addition to sheltering canvas, tote bags, and coverings. According to a company history on the Armbruster website, Portuguese sailors were the main fabric makers in Springfield, and they trained the Armbruster staff how to sew the large canvas tents required for circus tent use.

Heading into the 1890s, R.H. diversified his business to include baby carriages and household furniture. When the Illinois State Fair moved to Springfield in 1894, the Armbruster company began to supply tents for the fair. That contract has been with Armbruster’s ever since.

In April 1908, the city of Springfield hosted a “Made in Springfield” exposition.

“Armbruster is equipped to outfit anything from a play tent for the children to the biggest circus that travels,” the Illinois State Journal reported at the time. “And like practically every other Springfield manufactory, his business has got to the point where it pushes him. He used to have to push it.”

Armbruster Manufacturing obtained its first large-scale federal contract, to supply tents to the Red Cross, during World War I. The company also assisted the YMCA and Salvation Army during the war. 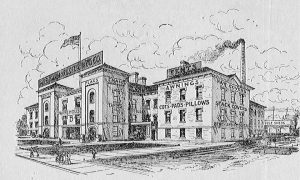 Helen Armbruster (1902-65) took on a major role in the company during World War II, when the military called on Armbruster to fabricate pup tents, wall tents, hospital tents and enormous enclosures for aircraft. In the prelude to war, the Illinois State Register reported in August 1940 the company had been awarded a $27,350 contract for 2,500 pyramid tents. The newspaper speculated an additional 60 employees would be needed to carry out the job.

“It really gave me a spark of happiness,” Stelle wrote from North Africa in April 1943, the Illinois State Register reported. “I tell all the fellows in my tent, ‘Don’t worry, Armbruster tents cover the world.’”

None of Walter’s and Helen’s four children intended to go into the tent business. However, their youngest son, Bernard “Bernie” Armbruster, a law student at Tulane University, took over Armbruster manufacturing after his father suffered a stroke in 1970 (Helen had died in 1965.) Bernie was only 25 years old, but he wasn’t a newcomer to tent-making.

“I started out as a water boy when I was about 10 years old,” he told a State Journal-Register reporter in 1975. “I ran Tent City (at the state fairgrounds) for many years under my mother, then ran it after she quit working out there.

“After the war, Dad really took off with new synthetics and new concepts. I’ve taken it from there and specialized it even more.” 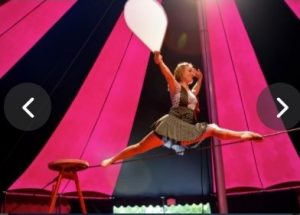 Specialization led to the company’s first tension tent being installed at the 1972 Milwaukee Summer Fest. The firm ushered in its own Armbruster TensionTent in 1990. In 1998, Armbruster marketed the EuroTent, the strongest twin-poled, peaked shelter in the industry. Between local and international contracts, the company did very well. In 1978, Armbruster built a new plant and office at 8600 Old Route 66 South, along the frontage road of Interstate 55.

Bernie’s sons Tadd, Hellar and Gunther each worked for the company in one form or another over the years. In 2005, Hellar became the company’s president and the fourth generation to run the business. In a 2014 Journal article, he attributed the company’s longevity to a business approach carried down from R.H. Armbruster and how the skills of the company’s workforce led to its continued success.

“To remain [America’s] oldest tent maker, we have retained very skilled craftsmen and operated under very strict, conservative business core values – listening to our customers, and helping solve their problems and building safe tents that sell.”

In addition to awnings and custom tents, Armbruster continues to manufacture vintage-style tents used by re-enactors and the film industry. As of 2020, 145 years after R.H. Armbruster opened his awning and upholstery shop, Armbruster Manufacturing was working directly with first responders to shelter people during the COVID-19 pandemic.

This entry was posted in Business, Industry, Military, Uncategorized. Bookmark the permalink.