The Illinois Agricultural Works, founded in 1882, had a farm implement plant at 10th and South streets for a few years. However, it is most notable because of its status as an early, failed business venture of the later cereal magnate Charles “C.W.” Post (1854-1914).

Illinois Agricultural’s co-founders were financier Louis Coleman, one Wilson Reed, and Post. It’s unclear what caused the the failure of Illinois Agricultural Works, but there is a suggestion in Coleman’s RootsWeb biography (no longer online) that he blamed Post. Here is the relevant section:

In 1882 Mr. Coleman formed a partnership with C. W. Post, then a small manufacturer of cultivators, and Wilson Reed, and organized the Illinois Agricultural Works and built a factory at the intersection of Tenth and South avenue, where farm implements were manufactured.

Owing to the impracticability of the supposedly practical man (meaning Post? — ed.), the enterprise was not successful, but Mr. Coleman has ever consoled himself with the thought that though his loss was severe his effort was not without some good to the city, for out of it has grown the present prosperous and successful Sattley Manufacturing Company, conducted by two practical men, who were induced to come to this city and for whom Mr. Coleman helped to make up a five thousand dollar purse.

Meanwhile, several other accounts of Post’s involvement with the equipment factory report that he blamed a nefarious banker — perhaps Coleman — for the company’s failure. What is clear, however, is that the closure of Illinois Agricultural Works sent Post into an emotional spiral and eventually caused him to leave Springfield. 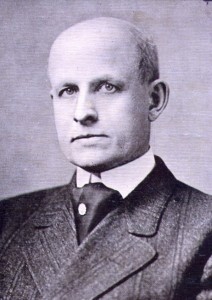 C.W. Post grew up in rural Springfield, attended Springfield public schools, and married Ella Merriweather in Pawnee. Although he dropped out of college, he had a gift for mechanical engineering. Post (sometimes working with another Springfield industrial innovator, A.L. Ide) obtained several patents for farm machinery — not to mention several non-agricultural products, such as “scientific suspenders,” a player piano roll and a wheel for a safety bicycle.

Illinois Agricultural Works manufactured one of his designs, the Post Capital City Cultivator. A summary of Post’s life published by the Seventh Day Adventist Church gives Post’s side of the business’ collapse, reporting that the business prospered “until a scheming banker tried to take control of the fast-growing business.”

Post’s subsequent quarrels and lawsuits with the banker are thought to have been (eventually) the main cause of Post’s first seven nervous breakdowns and loss of his health, which — for the first time — he clearly realized was his most cherished possession.

Once the Posts’ daughter Marjorie was born, the family moved from Springfield — to California, then Texas and finally Battle Creek, Mich., where Post’s concern for his health led to him becoming the first successful breakfast cereal merchandiser. His innovations included Postum, Grape-Nuts and, most notably, corn flakes. His Postum Cereal Co. was a forerunner of today’s giant marketer the Kraft Foods Group.

Post’s emotional health remained fragile his entire life, and he shot himself to death in Santa Barbara, Calif., in 1914.

Daughter Marjorie Merriweather Post (1887-1973), was born in Springfield, but only after her parents had already decided to seek more congenial weather; the family moved while she was an infant. As an adult, and C.W. Post’s heir, she became known as a business woman and philanthropist, but mainly for her extravagant lifestyle.

Several of her lavish homes are now landmarks all their own — especially the 115-room Mar-A-Lago in Palm Beach, Fla., which Marjorie Merriwether Post had built from 1924 to 1927. Donald Trump purchased from the Post Family Trust in 1985 and opened it as a private club. As president, Trump used Mar-A-Lago as one of his regular retreats.

The former Carrie Post King’s Daughters Home at Sixth Street and Black Avenue, named after Caroline Lathrop Post, the mother of C.W. Post, served for decades as a home for elderly women. The home closed in 2006 and briefly became a dormitory for the former Benedictine University at Springfield. As of this writing (2018), the building is vacant.

This entry was posted in Industry, Prominent figures, Social services. Bookmark the permalink.