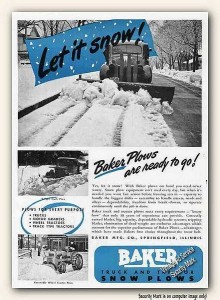 The Baker Manufacturing Company, founded in Springfield in 1908, was a predecessor of Springfield’s Allis-Chalmers (later Fiatallis) construction equipment plant.

Baker’s major innovations included creation of the first front-mounted fixed backfill blade for wheel tractors, in 1918; the first bulldozer for crawler tractors in 1924; and the first engine frame-mounted bulldozer cylinders, in 1946, on the Allis-Chalmers HD19 bulldozer. 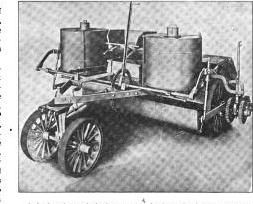 One of Baker Manufacturing’s earlier products was the Baker Dustless Pick-up Sweeper, a horse-drawn street sweeper that in one pass sprinkled water on a street (to keep down dust), swept dirt into the gutter and then piled the gutter accumulations into convenient piles. Promotional materials touted the advantages of the Pick-up Sweeper: “It is clear how relatively enormous is the saving in time, labor and equipment with one or more machines of such capabilities, especially in cities of any size.”

This entry was posted in Business, Industry and tagged Allis-Chalmers. Bookmark the permalink.