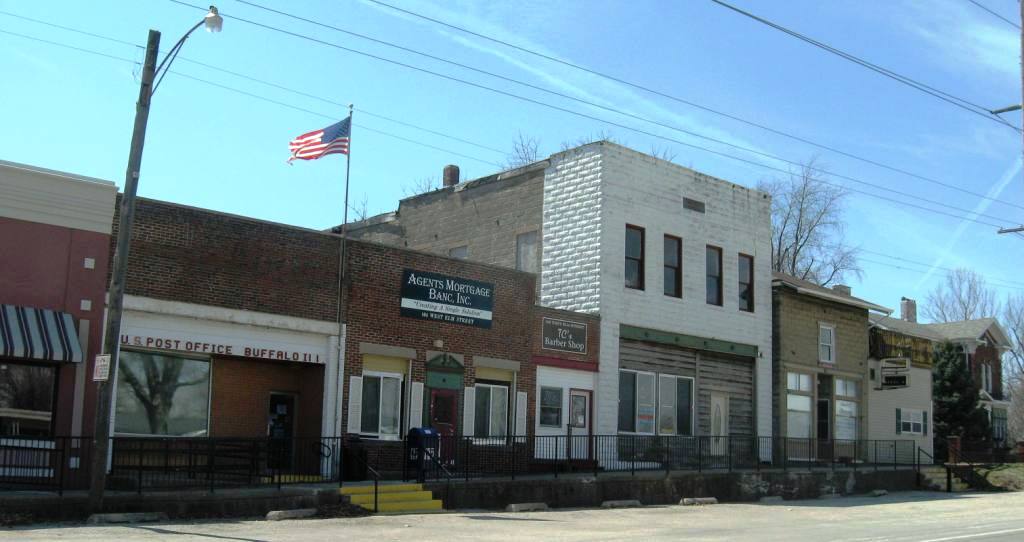 Buffalo, founded as a station on the Wabash Railroad, was platted in 1854  and incorporated as a village in 1872. Entrepreneur Josiah Green built the first house in what later became Buffalo in 1848; it was used as a boarding house for railroad workers for several years. (The building remained in use until 1975, when a gasoline truck crashed into an adjoining restaurant, and both buildings burned to the ground.)

In its early years, the village was the site of a flour mill, a grain elevator and the Buffalo Tile Works, whose products helped drain the central Illinois prairie. “A flourishing coffin factory” also operated in Buffalo in the 1860s, according to The History and Stories of Buffalo, Illinois by Perry Hall, a sesquicentennial booklet published in 2004.

The original rail station was three miles north of the older community of Mechanicsburg, and Buffalo was first known as Mechanicsburg Station – although the post office was called Watson. The source of the name Buffalo remains a mystery, according to The History and Stories:

Frequent speculation as been indulged as to the origin of the name Buffalo chosen for the new town. In that connection it may be interesting to observe that Josiah Green … was a native of the Carolinas, as was his wife, and that the designation “Buffalo” is said to have been used as a nickname for dwellers along the seacoast in the Carolinas.

Perhaps the name is not a poetic or imaginative one, but the tradition tells that it was chosen because of the huge herds of buffalo that gathered in a wallow just west of town.

Because of the confusion caused by the names of the railroad station and post office, The History and Stories adds, “Only after years of continuous effort on the part of citizens was the name Buffalo generally accepted.”

The railroad and, later, the Illinois Traction System were vital to the village’s growth. In 1880, for instance, passenger ticket sales on the Wabash, St. Louis & Pacific Railway depot averaged $115  a day, The History and Stories reports. During the same year, Buffalo shipped 66 cars of tile, 126 of livestock and 174 cars of grain.

One of the three physicians serving the village of Buffalo in the second half of the 19th century was the eccentric, self-taught Peter Leeds (1801-1885), whose legacy — literally, in hundreds of gold pieces — extended into the 20th century.

The History and Stories of Buffalo, Illinois, by Perry Hall, a sesquicentennial booklet published in 2004, quoted an earlier history, Bill Kirby’s Buffalo Chips and Tolono Clips (2000), in explaining what happened.

Two workmen digging a ditch on July 14, 1931, turned up “two old speckled jugs that were buried side by side,” Kirby wrote. (An Illinois State Journal article adds the details that the jugs had been buried about 18 inches below where Leeds scattered ashes from his home.)

“(The) jugs were broken and gold coins scattered the area. Coins were being looted and pocketed in a frenzy before some order was restored.”

It eventually was determined that the jugs had contained 639 U.S. gold coins, in denominations ranging from $1 to $20, in addition to another $265 worth of Dutch, English and French gold pieces. The oldest coin was dated 1810; the newest was minted in 1880.

The coins were valued at more than $6,000 in 1931, which was two years before President Franklin D. Roosevelt took the U.S. off the gold standard. (With inflation, the coins’ worth would be more than $87,000 in 2016, a figure that does not take into account their numismatic value.)

The discovery launched a scramble for shares of the treasure among Leeds’ descendants, the property owner in 1931, Alex Booth, and the two ditch diggers, Edward Jack and James Rogers.

Leeds, a recluse who did not trust his money to banks, died in 1885. His sons and seven other descendants also made claim to the gold when the word of the discovery spread. The son said Leeds told him that he buried money in glass medicine bottles whenever he accumulated a surplus.

After seventeen months of litigation, an agreement was reached to divide the gold among eleven people. Booth, the property owner, was given $3,020. He gave (the ditch diggers) $700 each for the discovery. Leeds’ heirs split the remaining $3,022.

The Journal said Leeds played a prominent role in Sangamon County history. A New Jersey native, he settled in Ohio and then moved to Mechanicsburg in 1836.

“For a time he seems to have taught school and is credited with having been one of the teachers of General Grant. He moved to Buffalo in 1859 and continued in active (medical) practice until 1865 when he retired to office practice only.”

Buffalo had its own combined grade school/high school until 1938, when its high school classes were merged with those of Mechanicsburg and Dawson to create the TriCity School District, the first such consolidated district in Illinois. Both the high school and, later, elementary classes are housed in Buffalo.

Richard Orr (1915-98), longtime rural affairs reporter for the Chicago Tribune, grew up in Buffalo. Orr also was an advocate and fan of the Illinois State Fair, and the fairgrounds’ Orr Building is named for him.

According to his Tribune obituary, Orr became the newspaper’s farm writer because no one else wanted the job:

He began his Tribune career as a business writer but was recruited to become the farm editor in May 1949 by publisher Col. Robert R. McCormick. McCormick had a working farm on Cantigny, his estate in Wheaton.

“No one wanted the job, but he took it on,” said Van (Jon Van, another Tribune writer). “He was always getting memos from the Colonel, who would ask him to write columns about odd things . . . at one point the Colonel was in London and told him, `I just got a double-yolked egg, do a story on double-yolked eggs.’

More information: Frank Trotter, who operated blacksmith shops in Buffalo, Riverton and elsewhere, published a rambling memoir, Rememberances (sic) of Days Gone By, in 1984. Both Rememberances and The History and Stories of Buffalo, Illinois, are available at Lincoln Library in Springfield.

Hat tip: Thanks to Bill and Jane Vetter and Jim Allen for research help.

This entry was posted in Business, Communities, Railroads, Transportation. Bookmark the permalink.