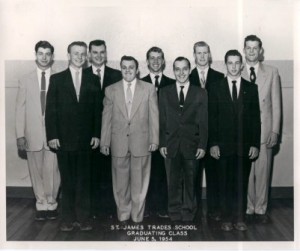 St. James Trade School trained boys, originally orphans, for such jobs as mechanic, baker, the building trades, butcher and others from 1930 until 1972. St. James was a boarding school from 1930 to 1963 and then became a day school. Its largest graduating class was 29 in 1969.

After the school closed, the facility northeast of Springfield was converted to Brother James Court, an intermediate care facility for mentally disabled men.

Both the trade school and Brother James Court  have been ministries of the Franciscan Brothers of the Holy Cross, an order founded in Germany in 1862.

Year opened:1930
Year closed: 1972
St. James HS team nickname: “Tradesmen”
St. James HS team colors: Blue & Gold
St. James HS fight song: “Cheer For Good Old St. James” ( University of Notre Dame Fight Song tune)
Come on and cheer for good old St. James,
The boys of the Trade School playing their games,
Fighting hard and winning too,
Blocking and passing and running through.
They are the boys with will to win,
They will stick through thick and thin,
So they’ll fight life’s battles long,
With courage and bravery.

Thanks to Phil Shadid for directing us to Illinois Glory Days.

This entry was posted in Churches, Education, Schools and school districts. Bookmark the permalink.