The first African-American high school graduate in Springfield wanted to be a schoolteacher, but it would be 80 more years before the local public schools would employ a Black teacher.

So Gertrude Wright (1861-1931) became a teacher in St. Louis, where she met her future husband, another African-American trailblazer named Clement Morgan. The couple set up housekeeping in Cambridge, Mass., and they became two of the Boston area’s most prominent civil rights activists.

The Springfield School District, founded in 1854, provided separate schools for Whites and Blacks for most of its first two decades. One White school was located in each city ward (the city administered the schools), and a separate school was opened to African-Americans citywide in 1858.

The transition to integrated classrooms in the 1874-75 school year was described by Jessie Palmer Weber in a speech she delivered in December 1914 at the dedication of the new Palmer School building. The school was named in honor of Weber’s father, former governor and Springfield School Board member John M. Palmer (1817-1900). The speech was printed in full in the Dec. 14, 1914, Illinois State Journal.

It is most curious that although feeling ran high in regard to the matter of admission of colored children in the schools which had been exclusively for white children, little is said in in the newspapers or even in the report of the superintendent at the time. …

Threats were made by some white citizens and their children, but the board of education and the teachers wisely decided to pursue a policy of masterly inactivity and matters soon adjusted themselves. Many amusing as well as pathetic incidents occurred in connection with the matter.

This girl was Harriet M. Palmer, called Hattie Palmer. She is now Mrs. E.G. Crabbe of Corpus Christi, Texas. Her colored schoolmate became a noted teacher of colored people and married Clement Morgan, a colored lawyer of Cambridge, Mass., where they live in comfort doing much good and are a credit to their race. When John M. Palmer died Gertrude Wright sent a wealth of flowers asking that they might be placed on his coffin.

Gertrude Wright’s parents were Thomas and Sarah Wright; her father (1809-1901) had been born a slave, but apparently bought his freedom in the 1840s. By the 1870s in Springfield, he was a relatively wealthy land owner and farm proprietor.

Gertrude Wright not only was the first Black graduate of Springfield High School, she ranked third academically in the class of 1877. The June 16, 1877, Illinois State Journal took note of her achievement.

HIGH SCHOOL COMMENCEMENT EXERCISES, ETC — The Anniversary and Commencement exercises of the Springfield High School take place at the First Presbyterian Church, commencing at nine o’clock this morning. The graduating class is a large one, numbering twenty-eight, and additional interest attaches to it from the fact third in rank among the twenty-eight is Miss Gertrude Wright, a young colored girl, whose percentage of excellence in scholarship exceeds that of all graduates of former years. This is the first instance in Springfield, and believed to be the first in Illinois, where a colored girl graduated at a public school. Her superiority in scholarship is attested by State Superintendent Etter, as one of the examiners, and County Superintendent Rourke, one of the school board. The members of the graduating class all attained high grades in scholarship, higher than usual. The commencement exercises will therefore be the more interesting. All interested in the High School and popular education should attend.

“The personal history of this young lady, being the pioneer of the colored race in competing with the Caucasian race in the higher departments of education, caused her to be listened to with additional interest,” the newspaper said. “The essay was written in a spirit of kindness and read with becoming modesty.” 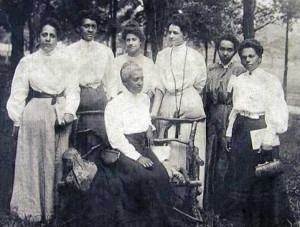 As Jessie Weber had noted, Wright went on to a teaching career — but she couldn’t do so in Springfield (the Springfield School District didn’t employ its first Black teacher until 1955).

Instead, Wright obtained a teaching job at Charles Sumner High School in St. Louis. Sumner was the first high school for African-Americans west of the Mississippi River, and as such its faculty included Black intellectuals from around the country — including Clement Morgan.

When the Niagara Movement folded in 1910, the Morgans went on to help found the Boston chapter of the National Association for the Advancement of Colored People.

According to a July 23, 2020, Illinois Times article written by Cinda Ackerman Klickna, Gertrude Morgan “also started the first African-American women’s group in Cambridge, served on the board of the Harriet Tubman House, and was chosen by the Massachusetts governor to represent the state at the dedication of the Frederick Douglass House Museum in Washington, D.C., in 1922. She worked to pass the 19th Amendment giving women the right to vote.”

Morgan Avenue in Cambridge is named after Gertrude Wright Morgan. The Morgans are buried in Cambridge’s Mount Auburn Cemetery, which in 2020 donated $5,000 in their names to the NAACP’s empowerment programs.

Note: Jessie Palmer Weber was distinguished in her own right. She was Illinois state librarian from 1898 until her death in 1926 and also helped organize and served as the first secretary of the Illinois State Historical Society. More information on her is available on JSTOR (free registration required).

Hat tip: This entry has been expanded. Thanks to Cinda Ackerman Klickna for additional research into the life of Gertrude Wright Morgan.