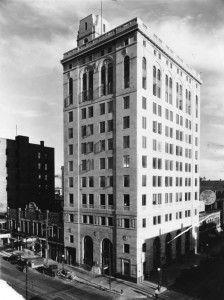 So George Keys came over about a week before they closed and said they didn’t think they could hold on and wondered what help the banks could give them. I told George, I said, “The banks are going to have their own problems and I doubt if there is much that we can do.” …

I suggested calling a meeting of the boards of the four banks and see what our problem was and what could have been done about it. So we did meet. We had a meeting in the governor’s mansion — I think (Louis L.) Emmerson was governor.

It just looked as if the Ridgely-Farmers State Bank couldn’t weather the storm. The plan we ironed out was that we were to get the Reconstruction Finance Corporation down here and see if they couldn’t give a guarantee of any of the deposits. Say, for instance, to guarantee half of the deposits so a person with five thousand dollars could come in and withdraw twenty-five hundred and leave the rest. The Ridgely in turn would give the Reconstruction Finance Corporation all of their assets and securities for the money they would finance.

Well, (the RFC) took that under consideration and went back to Chicago and decided that they couldn’t do it, that they had never done a partial guarantee before.  As a matter of fact, they were new and not particularly adept. On Monday morning, we all became pretty aware that the Ridgely-Farmers couldn’t pay their depositors much longer.

That was in, I think, in December of 1932. So, the banks did what they could to get as much cash to cash securities, to have cash on hand. Well, we managed to do a little better because we had a very small group of stockholders who helped out by buying the less liquid assets that the bank had, teachers warrants, anticipatory tax warrants. The bank sold those assets to this group of stockholders for cash at par and they were good and were eventually paid out a hundred per cent. That small group of stockholders gave some municipal bonds to the bank and the bank sent them to Chicago and converted them into cash and sold to the Harris Trust. It took some time to get the bonds sold and to get the money down. The Harris Trust had the proceeds of these bonds that they had sold, but they couldn’t get the cash down in time, so they credited it to a St. Louis bank and the St. Louis bank — I think it was two hundred fifty or three hundred thousand dollars sent up in a truck.

And in the meantime, the Ridgely had to close on, I think, it was Friday morning. … And there was great excitement in town. Everybody was coming downtown and we were particularly unfortunate because we had a school children’s savings account. They worked it through the teachers. Teachers would keep their bank books and then the teachers would deposit it for them; but in order to draw it out, they had to have one of their parents with them. So, everyone who wanted to take money out of the bank had to have their father or mother with them, which added to the crowd and to the confusion.

It was a rainy day, I remember, and the money didn’t come up from St. Louis, from the Harris credit, till just before the bank closed. I remember the Brink’s truck pulling up from St. Louis and we had four or five policemen on either side making a file, and they delivered that money in sacks of nickels, dimes and quarter and dollar bills and so forth, whatever the cashiers figured — the type of money we would need, the denominations we would need. And it took a good while. Looked like an awful lot of money. It looked like a couple of million, I guess (laughter) to the people who were there and saw it. And they did stop and see it, those who were down in the bank.

But the amount that was drawn was surprisingly little and less than we had anticipated. We had plenty of money to meet the depositors, their demand and all.  … The Ridgely, of course, had to close. The other two banks weathered the storm and things got a little quieter each day. There was uncertainty and withdrawals, but there was also a good many deposits put in.

A transcript of the full Bucari interview can be read here. (Bunn had previously been interviewed as well by his daughter, Sally Bunn Schanbacher; that transcript is here.)

The bank run also was remembered in another Bucari interview, this one of George Bettinghaus, a Marine Bank official who had previously worked at Ridgely-Farmers State Bank. Bettinghaus contended Ridgely-Farmers could have weathered the storm; the closing, he said, was “semi-political.”