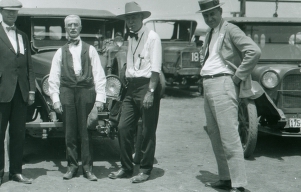 The Bates Experimental Road of 1922-23  was, literally and figuratively, a groundbreaking study.

In the early 1920s, the Illinois Division of Highways was preparing to embark on a major road construction program to accommodate the rapidly growing population of automobiles. In particular, state officials needed to determine how to pave highways to withstand the then-new phenomenon of heavy truck traffic.

“At the time, the State had in contemplation the expenditure of possibly one hundred million dollars for a road improvement program,” according to a 1922 report. “To undertake a program of this size without definite scientific knowledge of the behavior of certain pavements under truck traffic and rural conditions … was deemed unwise.”

The result was the construction of the Bates Experimental Road, a two-mile section of paved roadway that ran from Bates, an unincorporated area west of Springfield, to Farmingdale Road.

The experimental road originally was divided into 63 sections ranging from 100 to 250 feet long each.  Twenty-two sections were brick, 17 asphalt and 24 concrete, “several thicknesses of each type being used … so that the capacity of each section, measured in terms of weight and number of trucks, will be plainly obvious.”

Lloyd Loving of New Berlin, who worked on the road in 1922, recalled in 1975 that many people thought the experiments were a waste of money.

“(N)o one realized at the time that in fifty years there’d be as many hard roads in the country as there is, and I think they thought that was a lot of money to spend testing,” he told an interviewer for the Oral History Project at Sangamon State University (now the University of Illinois Springfield).

“And then turn around and wear it out driving trucks back and forth,” he said. “That seemed to be the most foolish thing, wearing it out.”

The doubters were wrong. The Bates Experimental Road for the first time gave road engineers data on soil mechanics and on how to select pavement types, thicknesses and construction methods to match an individual highway’s expected use. It also gave officials a base from which to set weight limits for both trucks and roads.

“The experimental road attracted international attention when information on hard road building was scarce,” The Associated Press reported in 1926, and officials estimated that the pavement tests saved the state $9 million in construction costs.

More information: In addition to Loving, several other interviewees for the University of Illinois Springfield oral history program discussed their parts in the Bates Experimental Road.

This entry was posted in Transportation and tagged Bates, Oral history. Bookmark the permalink.