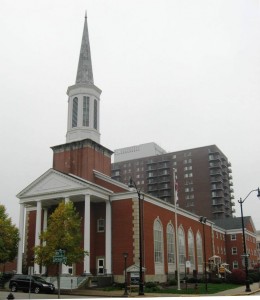 “Over the next 40 years, members of the First Baptist Church of Springfield helped to organize Baptist churches in Loami, Clary Grove, Rock Creek, and Decatur, and established the North Baptist Church in Springfield,” a church history says.

“History buffs will be interested to know that the church bell at our Downtown Campus is the same bell Abe Lincoln heard ringing at First Baptist Church when he lived and worked in Springfield,” the church history adds.

This entry was posted in Churches, Lincoln, Abraham and tagged Baptist Church. Bookmark the permalink.