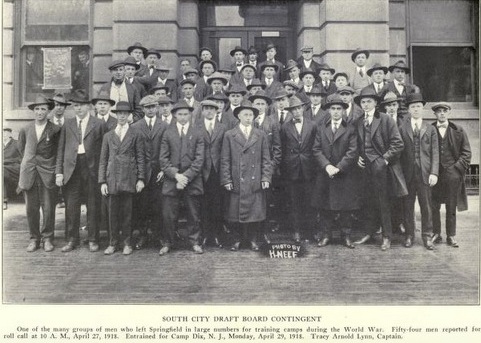 The Honor Book of Sangamon County is reporter Nellie Browne Duff‘s compilation of information on every county resident who, in one fashion or another, overseas or on the home front, contributed to the U.S. effort in World War I. 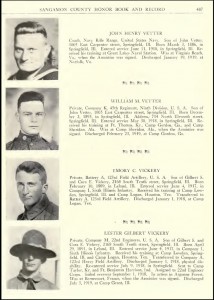 Nearly 1,000 of the book’s 1,200 pages are devoted to photos and brief service histories of perhaps 4,000 county residents who served in the military — male, female, white or black (although, in keeping with the times, “colored” service members are listed separately from whites).  (Typical page, left)

Duff explained her research process in an Author’s Foreword:

No effort has been spared in the compilation and production of the Sangamon County Honor Book to make it authentic, authoritative, and accurate. However, I cannot vouch for all the facts contained therein, because I was, to a very great extent, compelled to take the information given me by the families of the men and women in service, by their friends, or whatever persons I could locate who knew anything about them. I secured the service record lists of churches, lodges, stores, industrial and other organizations, and was given access to the records of the draft boards and to newspaper files in a comprehensive effort to obtain some information about every person who went into service from Sangamon county. And in every case, however the information was received, an attempt at verification was made. …

If the service record and photograph of any man or woman from Sangamon county who served in the World War is omitted from the Honor Book, it is due to their failure to respond to repeated requests for necessary pictures and information …

Despite the massive effort suggested above, Duff and her three assistants managed to complete their work in time for the Honor Book to be published in 1920, a little over a year after the armistice of Nov. 11, 1918, ended the war. The Honor Book’s publisher was Alvin P. Bickenbach of Illiopolis, who had been chairman of the Sangamon County Exemption Board (the draft board) during the war.

Correction and hat tip: The armistice date in the last paragraph has been corrected. Thanks to commenter Diane Unger for catching our mistake.

This entry was posted in Journalism, Military, Resources. Bookmark the permalink.