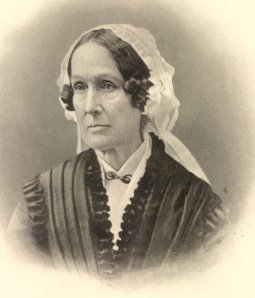 At her death, James Matheny described how Salome Enos dealt with the loss of her husband.

“Left a young widow, with sons and daughters to provide for, with a property then of small commercial value in dollars, she husbanded her resources, cared for and protected that property with frugal industry for years and brought her children one of the largest estates of the city,” he wrote.

Matheny added that Salome Enos later gave Sangamon County an estimated $3 million (in 1877 dollars) worth of property, including the south, east and west sides of the downtown square. In 1837, she gave the city of Springfield the square itself as the site for the new Statehouse (now the Old Capitol State Historic  Site).

“The last dozen years of her long life she lived in comparative retirement in her beautiful home on North Sixth street with her eldest daughter and a companion whom, as an orphan, she received into her home, when poor and friendless, and cared for her for more than fifty years,” Matheny wrote.

Of all that little band of heroic women who fifty years ago endured the hardships of this then western wild, Salome Enos was the last. One by one she had seen them, wearied by life’s toils, lay down –Elizabeth Taylor, Flora Cox, Rebecca Herndon, Melinda Iles and Jemima Matheny – and now she, too, has gone, and we have faith to believe that they have all met once again “on the banks of that beautiful river.”

Salome Paddock Enos kept a diary of her family’s journey from Vermont to St. Louis in 1815-16. Most entries simply describe the weather and the distance traveled that day, but a few are a little more descriptive (spelling and punctuation in original):

Thursday (Sept.) 26th (1816) fair high winds was passed by a fine large Steemboat was surprised to see with what velocity she stemed the current passed the Wabash a beautiful river on the right P. M. reached the much wisht for port of Shawneetown found it to be a wreched sunken place steemboat desending the river which surpassed the former in beauty and grandeur.