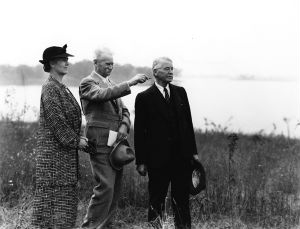 Harriett Knudson (1883-1969) is best known as the driving force behind creation of the Lincoln Memorial Garden and Nature Center at Lake Springfield. She also organized the Springfield Civic Garden Club (Knudson was the first person elected to honorary life membership in the club) and started the Springfield PTA Council.

Her activities with the garden led to her selection as the first Copley First Citizen (an honor now titled “Springfield First Citizen”) in 1963.

Knudson, who was born in Montana, was trained in nursing in Chicago, where she met her husband, Dr. T.J. Knudson. They moved to Springfield, Dr. Knudson’s home town, in 1910.

Harriet Knudson discussed creation of the garden in an interview conducted by her daughter, Harriet Knudson Flinn, in 1965. Another daughter, Berta Cochran, discussed the garden and her mother’s life in general in a series of interviews done by the Oral History Project at what is now the University of Illinois Springfield in 1972 and 1975. Both sets of interviews were later combined.