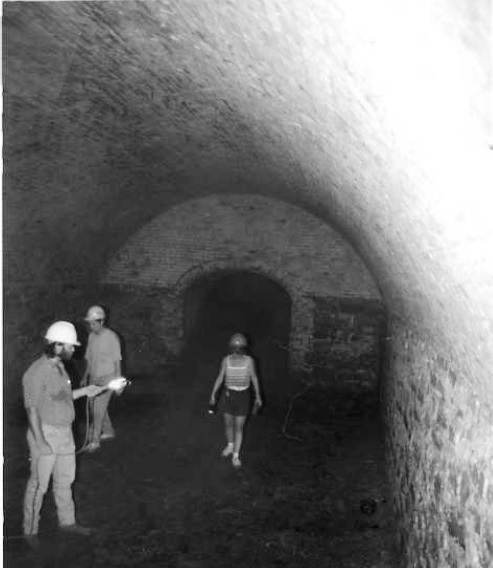 During its heyday, the Kun Brewery was one of the most prominent in the city, and one of its flamboyant brewmaster/owners erected a locally famed mansion at Walnut and Carpenter streets. Though long forgotten, the brewery came to light, literally, in 1993, when its old storage caverns were unearthed during a street reconstruction project.

Andrew Kun reportedly arrived in Springfield from St. Louis, Missouri in 1854. While in St. Louis, Kun had been involved with well-known brewer William Lemp. On his arrival in Springfield Kun leased the dormant Reisch Brewery from Franz Reisch, who had closed operations due to prohibition in the city.

Kun operated the Reisch Brewery during the prohibition years of 1853-55 with no competition or apparent trouble with local authorities and likely profited greatly from it. He retained the services of the best lawyers in the city, one Democrat and one Republican. This legal team managed to circumvent the law. Prohibition was eventually repealed, and Frank Reisch resumed operation of his brewery.

Using proceeds from his leased brewery, Kun bought a tract of 6.92 acres of land on the northwest side of Springfield and built his own brewery in 1856. George Reisch noted Kun built “what at that time was considered a model brewery. It was all brick with arched cellars, had all modern improvements and was up to date at the time.”

A good description of Kun’s brewery appeared in the Illinois State Journal in 1859. Kun had submitted two kegs of his lager brew for evaluation by the Sangamon County Agricultural Society. The article noted: 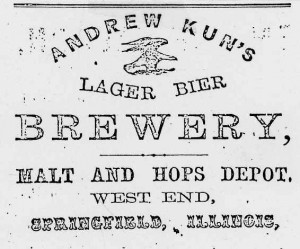 Mr. Kun has expended a large amount of money in the erection of his brewery and improvements connected with it. It is situated near the north-west corner of the city, on handsomely undulating grounds, on which the original trees of the forest are now growing. He has already expended $41,000 in improvements. Of necessity, these improvements are extensive. All the modern invented conveniences for storing, malting and brewing have been adopted. The vaults, far under ground, contain more than 100 casks of immense capacity—holding from 10 to 30 barrels each. In these buildings there are 693,000 brick, besides a very large amount of rough and hewn stone.

Andrew Kun became wealthy. The 1860 census of population listed his real estate value at $25,000 and personal property at $6,000. A manufacturing census, also taken in 1860, placed the value of the brewery at $40,000. The brewery used 12,000 bushels of barley and 9,000 pounds of hops to produce 5,000 barrels of lager beer, five times the amount produced by the rival Reisch Brewery.

Kun died on July 6, 1863 at the age of 49. He left Rosa, his wife, son Frank Xavier and two daughters, Genefeve and Louisa. Rosa, 36 years old at the time of her husband’s death, was left the brewery and all its contents, which were valued at $20,000.

The widow Kun was married a year later to Robert Rudolph, the brewmaster for the brewery. Rudolph assumed management of the brewery and announced himself the successor to Kun in the 1866 city directory. The brewery is described in that directory as consisting of a “building 150 (feet) x 100 (feet), two stories height, has 28 fermenting tubs, one large cellar 280 (feet) x 18 (feet). The machinery is run by 15 horsepower engine; 20,000 bushels of grain are used yearly. The brewery is situated in a beautiful grove of 21 acres, bearing the name of the proprietor.”

The Rudolphs spent their money lavishly. Rosa Kun Rudolph bought a 10-acre tract of land across Walnut Street east of the brewery. She and her husband had a large Italianate villa constructed. This mansion, with extensively landscaped grounds, was designed by the local architectural firm of Schwartz and Dilger. Robert Rudolph also erected the grand Rudolph Opera House at the southeast corner of Sixth and Jefferson streets, now the home of the Abraham Lincoln Presidential Library.

Rosa Rudolph apparently managed to keep the brewery because it was still in her name. She moved back into a house on the brewery complex. Rosa soon married again to Moritz Keydell, who apparently also worked as a master brewer at her brewery.

The brewery was leased on Oct. 6, 1870 to the partnership of John Fisher, Adam Vogel and Charles Mueller with a payment of $2,500 for one year with the privilege of a two-year option. The new partnership was reported by John Carroll Power in 1871.

“Fischer & Co. are successors to M.K. Keydell,” Power wrote. “Their fine brewery is situated in the northwest portion of the city, and Keydell’s Park is known as one of the most beautiful spots in Springfield. This firm employs twelve men, buys about fifteen thousand bushels of barley per year and sells about $60,000 worth per year. The value of the brewery and grounds is over $75,000.”

The partnership surrendered the lease to Rosa Keydell on September 5, 1872. Rosa’s son, Frank, assumed operation of the brewery next under name of Frank Kun and Company Brewery.

In 1874, the Kun children, Genefeve Mueller, Frank Kun and Louisa Kun, legally maneuvered ownership of the brewery from Rosa to themselves. The siblings’ relationship soured, and by 1875 a lawsuit was filed by Frank and Louisa against Genefeve. The brewery had to be auctioned on June 16, 1875 as a result of the lawsuit.

A partnership comprised of J. Taylor Smith, Gilbert Van Dugan, Donald Ross and Henry Mueller paid $21,333 for the brewery. Mueller, the husband of Genefeve Kun Mueller, had worked as a manager for Robert Rudolph before going into the wholesale liquor business.

The brewery was sold again in 1881, when Mueller was ordered by the Circuit Court of Sangamon County to pay $8,615 to Genefeve Mueller. J. Taylor Smith bought the property at auction on June 25, 1881 for $6,667. Smith remained the owner until his death on January 25, 1892. His heirs sold the brewery property to Thurman Baker in 1904. Baker had it surveyed and platted as a residential subdivision.

Little is known about the operation of the brewery after 1875. Research indicates it probably quit functioning after 1877. The buildings were demolished and grounds made into house lots after Baker’s purchase.

The only physical evidence left of the brewery were the large underground storage cellars. The cellars were rediscovered in 1993, after a large sinkhole appeared while work crews were widening Walnut Street. Archaeologists were called in to investigate the cellars before they were destroyed. The archaeologists found the remains of a large system of cellars that were used to store the casks of beer.

More information: The history and construction of the Kun Brewery, including photos of the rediscovered caverns and more information about Kun, the Rudolphs and Springfield brewing in general, are available in The Industrial Archaeology of Breweries: Archaeological Investigations at the Mid-Nineteenth Century Kun-Rudolph Brewery.

Archaeologist Robert Mazrim, working with the Illinois Department of Transportation, also compiled a fascinating video, available on YouTube, documenting the discovery, exploration and demolition of the caverns, which totaled in the neighborhood of 300 linear feet.