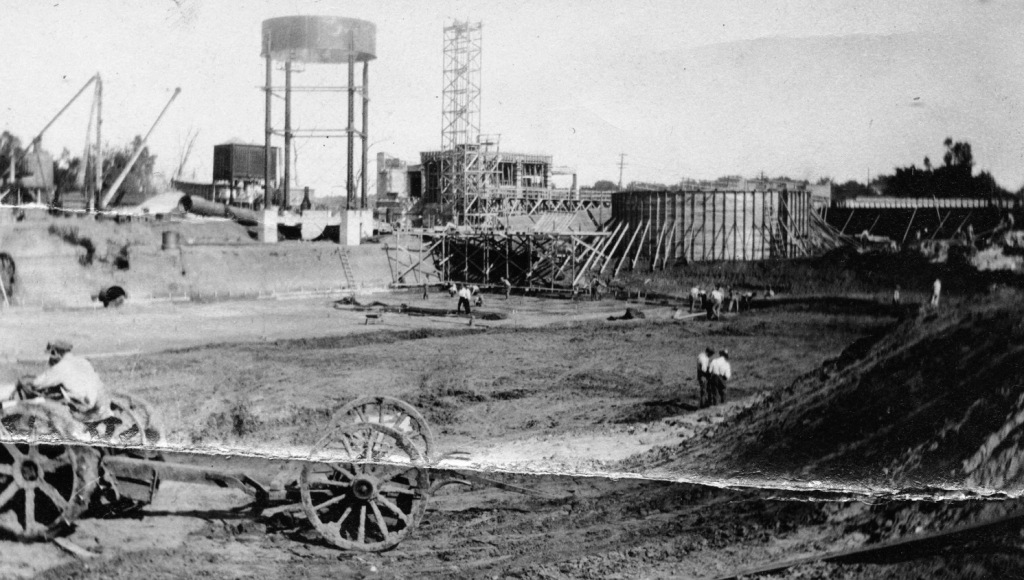 Lake Springfield is a 4,000-acre artificial lake constructed by the city of Springfield in the early 1930s. The lake first reached full pool (560 feet above sea level) on May 2, 1935; it was dedicated in a three-day-long celebration in July 1935.

The effort to build the lake was led by longtime city Utilities Com. Willis J. Spaulding. His track record for honest, capable administration helped persuade voters in 1930 to approve a bond issue to pay part of the lake’s cost.  (Spaulding Dam is named after the commissioner, who oversaw Springfield’s electric and water departments from 1909 until 1943.) In the end, however, federal relief programs such as the Works Progress Administration paid much of the lake’s $5.64 million cost.

Most of those who owned land needed for the lake were willing sellers — thanks partly to the Great Depression — but not all. Leander Shoup had to be “escorted from his land by the sheriff and ten deputies,” according to a City Water, Light and Power history of the lake. 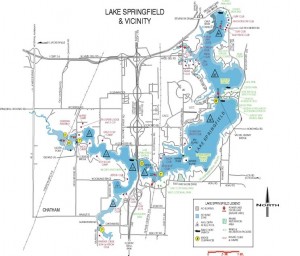 Three water sources originally were considered for construction of the lake — the Sangamon River, the South Fork of the Sangamon and the Sugar Creek valley. Engineers determined that Sugar Creek was the most economical option.

The lake’s watershed takes in 265 square miles, or 170,000 acres, mostly in farmland. When built, Lake Springfield had capacity to hold more than 20 billion gallons of water, although sedimentation has reduced that amount over the years (to an estimated 16.7 billion gallons in 2004).

The lake has undergone both drought and flood over the past 80 years. The worst drought, which lasted from 1952 to 1955, drew the lake down 12.5 feet below full pool, reducing its water storage to 7.4 billion gallons and threatening operations of both the power plant complex and the water treatment plant. That prompted construction of an emergency connection to the South Fork to supplement the lake. 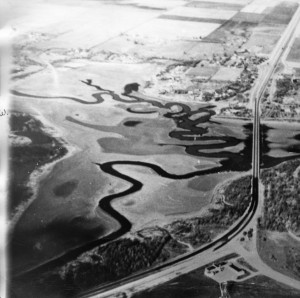 Lake Springfield during the 1950s drought

The 1950s drought also led to plans to build a second lake as a long-term backup water source.  Nearly all the land for Lake II (later named Hunter Lake, after former utilities commissioner John Hunter) had been purchased by the early 21st century. However, bureaucratic hurdles and continuing public doubt about the need for the new lake left it unbuilt as of 2013.

CWLP began to test raw lake water for bacteria in 1999, after 350 lake users contracted leptospirosis following the 1998 Ironhorse Triathlon. The source of the bacteria was never determined.

More than 700 residences, built on land leased from City Water, Light and Power, line portions of the lake shoreline. However, more than half of the marginal land remains public, used for parks, a wildlife sanctuary, Lincoln Memorial Garden, Lincoln Greens Golf Course, Henson Robinson Zoo, the Springfield Muni Opera, a marina and a number of clubs and camps.

More information: See the pamphlet CWLP published as part of the lake’s 75th anniversary in 2010.