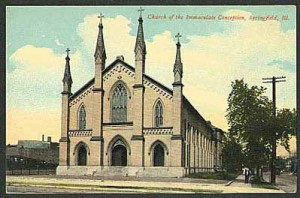 The Rev. James Fitzgibbon, the original parish pastor, oversaw construction of the Church of the Immaculate Conception, which was dedicated on April 3, 1859. Immaculate Conception Parish originally was considered to be the Irish parish; Springfield’s German Catholics, who made up most of the rest of the area’s Catholics, worshiped at St. John the Baptist Church and later at Ss. Peter and Paul’s.

Father Fitzgibbons built a two-room school for boys (girls went to St. Angela School at Sixth and Mason streets). Father Hinssen converted the old St. John the Baptist Church into Immaculate Conception’s own girls’ school. Father Brady lengthened the church building by 20 feet in 1870 and built a two-story parish school in 1876 (though boys and girls still attended separate classes).  And Msgr. Hickey built a new priests’ home and a convent for the Dominican nuns who staffed the school. He also eliminated gender-segregated classes in 1890.

“Old St. Mary’s” church was decommissioned and converted first to a high school  (Cathedral Boys High School) and then was used as offices for various Catholic organizations. Both the church and school were demolished for off-street parking in 1952.

In recognition of his 35 years as pastor of the Church of the Immaculate Conception, Msgr. Hickey is interred in a crypt in the new cathedral.

Note: This entry has been updated to correct the date when the church at Seventh and Monroe was demolished and to provide additional information on the building’s later uses.

Source: The web site of the Diocese of Springfield in Illlinois

This entry was posted in Churches and tagged Catholic. Bookmark the permalink.

10 Responses to Church of the Immaculate Conception (‘Old St. Mary’s’)