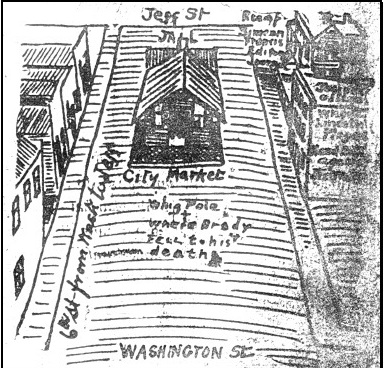 Drawing from the Sangamon Valley Collection, reprinted in Fever River Research’s survey done prior to construction of the Abraham Lincoln Presidential Library and Museum

A 1905 drawing by A.V. Arnold shows the Old City Market and City Jail, which were in the middle of Sixth Street between Washington and Jefferson streets. The offices of the Illinois State Journal are on the right, along with the home of newspaper editor Simeon Francis.

The note, “Whig Pole where Brody fell to his death,” refers to an accident on Aug. 3, 1844, that killed one man and badly injured another. As part of the 1844 election campaign, local Whigs decided to erect a 216-foot-tall ash pole in the middle of Sixth Street in front of the market. John Brodie, 50, a stone mason, was one of those responsible for rigging the tackle on an 80-foot-high derrick set up to lift the pole into place. A crowd of Whigs had been recruited to pull the ropes.

Brodie and an assistant William Conant, 18, had to climb to the top of the derrick to make an adjustment. As they did, however, one of the ropes broke, and “a cry of horror went up from the crowd, ‘the derrick is falling,’ and the stentorian voice of ‘Old Rube Redford’ was heard: ‘Jump for your lives.'”

Brodie fell to the ground with the derrick and was crushed. Conant did jump, from 60 feet up.  He lived, but suffered broken ribs and a fractured ankle that left him lame for the rest of his life.

This entry was posted in Business, Illustrations, Local government. Bookmark the permalink.