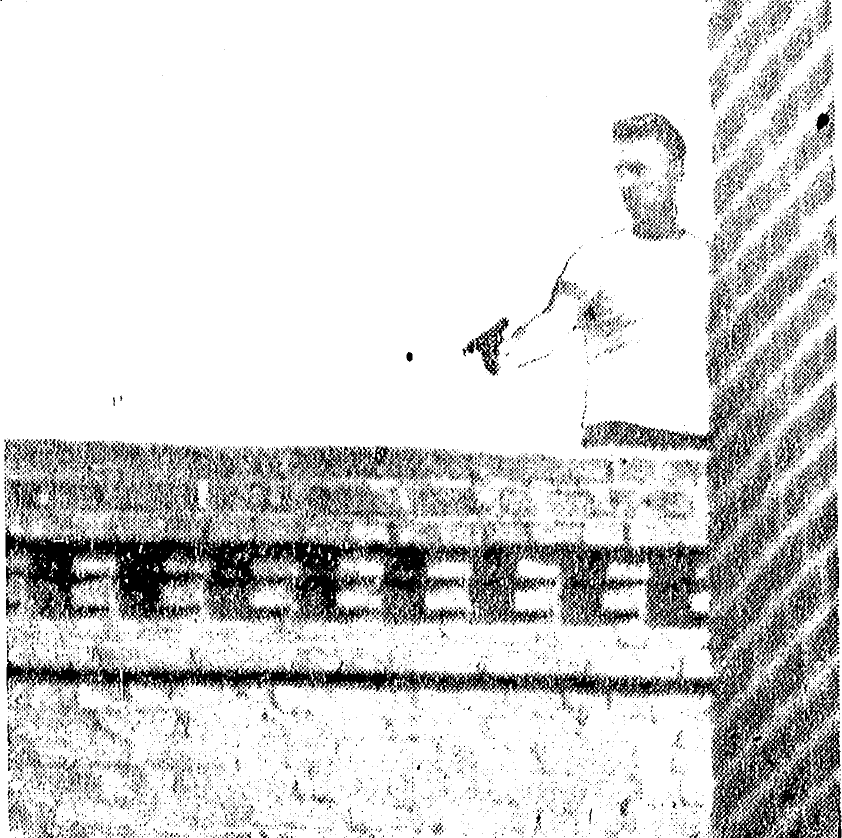 Updated with information on the Horn Hotel — ed.

A man fired shots at random from the roof of a Springfield hotel for more than an hour the evening of July 1, 1951. Somehow, no one was injured except the gunman.

It was only luck that kept everyone else unwounded. Waterfield had three weapons with him on the roof of the three-story Horn Hotel at 806 E. Adams St. (There were six more inside Waterfield’s room at the hotel.) Police estimated he fired more than 100 rounds from two automatic pistols, one .22-caliber and the other .45-caliber, along with a .22-caliber rifle, Harris wrote.

During the shooting, Waterfield fired into one car, narrowly missing a 13-year-old girl; shot into the tire of a parked automobile; took several “pot shots” at police and pedestrians and shot twice at William Calvin, Illinois State Journal and Register staff photographer, who was photographing the scene.

Mr. and Mrs. Angelo Mari and their daughter, Deanna, 13, all of 2139 Marland Ave., were apparently the first to be shot at by Waterfield. Mari and his wife, Jeanette, said they were driving in their car west on Adams St. when they passed the hotel. Mrs. Mari remarked that someone was shooting firecrackers, after she heard a report.

A moment later Mari said Deanna exlaimed, “No, daddy, it must have been a gun, here is the bullet hole.” Mari said he found a .45 slug buried in the floor of his car, about two inches from his daughter’s feet. The girl was sitting in the back seat.

Large crowds of people formed along the streets and in spite of police efforts many strolled into easy shooting range of the berserk gunman. Several cars failed to observe police whistles, until police drove cars crosswise to block the streets.

One man, who lives in an apartment across the street from the hotel, stood at a window while two bullets crashed at either side of him.

Waterfield was leaning against a chimney, apparently weakened by loss of blood, when the three officers stormed the roof at 7:30 p.m. He had been shot in the right knee, upper right arm, left chest and left elbow. 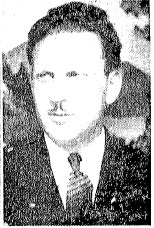 Waterfield, a truck driver for the Central Illinois Light Co., had been arrested several times before for being drunk and disorderly, and he reportedly had been in a tavern fight earlier the day of the shooting.

However, the only reason he gave police for his outburst was, “I was just mad at everybody – people kept borrowing money from me all day long.”

Waterfield spent several weeks recovering at St. John’s Hospital, followed by months in the Sangamon County Jail. He pleaded guilty in February 1952 to assault with a deadly weapon and was sentenced to nine additional months at the Vandalia State Penal Farm. What happened to him after that is unknown.

The Horn Hotel, a boarding house-style hotel of about 80 rooms, was on the southeast corner of Eighth and Washington streets. It was known as the Interurban Hotel before Helen Horn took it over in 1942.

In 2021, a parking lot for the Sangamon County Complex occupied the entire block that once included the Horn Hotel.

All three officers who captured Raymond Waterfield went on to make their marks in law enforcement and politics.

William “Big Cal” Calvin (1923-89) got his start in the news business as a newsboy at the state Capitol newsstand. He was no rookie when it came to action photography, having learned the trade while serving with the U.S. Navy in the North Atlantic during World War II. According to his obituary, his wartime photography often was shown on newsreels worldwide. Calvin later served as official photographer for five Illinois governors (Stevenson through Ogilvie) and for the Illinois Senate.

This entry was posted in Crime and vice, Law enforcement, Media, Uncategorized. Bookmark the permalink.