Octavia Roberts was a celebrity as well as a writer for the Illinois State Journal, and her photo often accompanied her stories. This is from 1913. (Courtesy State Journal-Register)

Octavia Roberts (1875-1972), was a Springfield-born journalist and writer. Her best-known work today is Lincoln in Illinois, a brief (160-page) reflection on Abraham Lincoln in New Salem and Springfield that was published in 1918.

Roberts was for a time the inamorata of Springfield poet Vachel Lindsay, although the ardor seems largely to have been on Lindsay’s side.  “I have to acknowledge that at this period I had no great faith in his genius,” she once told friends. “His mind, although fertile and original seemed wild and undisciplined. Then, too, he seemed younger than he was with his childish love of candy, soda water and the moving-pictures, which were in their crude infancy.”

Roberts worked as a reporter for the Illinois State Journal (she wrote the front-page story on Jan. 27, 1913, reporting Gov. Edward Dunne’s signing of the law giving women the right to vote in Illinois) and wrote for The American Magazine and Collier’s. She married attorney Barton Corneau in 1913; the couple subsequently moved to Massachusetts and then Maine, where Roberts died at age 96. She is buried in Oak Ridge Cemetery.

Roberts was the daughter of a distinguished Springfield family — her father was a prominent clothing merchant and her mother a Ridgely — so she was intimately familiar with Lincoln sites and memorabilia from childhood.  From the introduction to Lincoln in Illinois:

The Springfield children learned to know Lincoln, therefore, from the stories of his neighbors and through his association with various places, long before they knew him from the histories. It was, I remember, with a feeling of surprise that I came upon his name in books. It was like coming upon a friend of every day riding in a barouche with four horses. One preferred the friend and neighbor in a linen duster a market basket upon his arm. Moreover, the histories had little to say of Springfield, Lincoln’s home for twenty years — of Springfield, which seemed to us his proper background.

It is of the everyday Lincoln and his Mid-Western home that I shall attempt to write, in the hope that the  memories treasured by his townsmen may not wholly be without interest to the wider world. 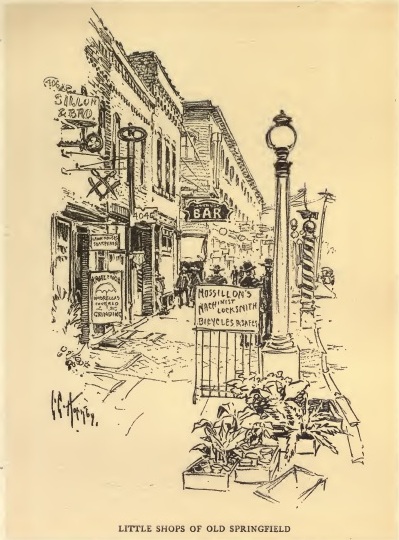 Lester Hornby’s 25 pencil illustrations (sample above) are an evocative complement to Roberts’ prose. The entire book is available online through the University of Illinois.