Springfield folklore says the city’s population of sweet gum trees (and their annoying, spiky “gum ball” seed pods) dates from the great elm tree die-off of the late 1940s. And sweet gums indeed were one of the main tree species experts suggested be planted to replace the thousands of elms that died in Springfield from 1945 to 1949.

But the sweet gum (scientific name liquidambar styraciflua) became a prominent part of the local forest more than a decade earlier, mostly due to one man: lumber dealer and nature lover A.R. Booth. For Arbor Day from 1936 into the 1940s, Booth donated thousands of seedlings for planting throughout Sangamon County.

Booth (1898-1973) was a partner in the Booth & Thomas Co., which originally sold lumber, paint and other construction materials (the company later became mainly a plumbing/heating supply dealer). He also was an officer of the Sangamon County Farm Bureau and a trustee of Westminster Presbyterian Church. Booth served as president of the Abraham Lincoln Council of the Boy Scouts of America and received its Silver Beaver Award, given to the council’s top adult leaders, in 1948. 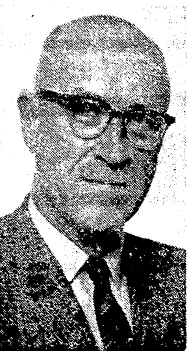 In 1932, A.R. Booth and his wife Verna (1899-1983) were among the charter members of the Nature League of Springfield, which was led by a Roman Catholic priest, Rev. George M. Link (1896-1971). Link was pastor of St. Joseph the Worker Parish in Chatham and may have become acquainted with A.R. Booth through their mutual work with the Boy Scouts.

“The organization hopes to serve as a clearing house and sponsoring body for all worthy but detached nature interests of the community,” a spokesman said in announcing the league’s program. Verna Booth was the group’s first treasurer.

League activities originally focused on lectures (mostly given by Link), with occasional hikes and driving trips. The league also sponsored a 15-minute biweekly radio program and a regular newspaper column. With the creation of Lake Springfield in 1935, Link and the league helped spearhead creation of the lake’s Wildlife Sanctuary.

A.R. Booth also began his tree giveaway program in 1936, working with Will B. Otwell, “famous tree man of Carlinville.” (Otwell [1863-1941], actually was better known for his farm education programs, including “Corn Clubs” for farm boys, but he also was a reforestation advocate. Independent of Booth’s tree distribution, Otwell in 1937 donated 3,500 black walnut saplings for planting in a grove on the shores of Lake Springfield.) According to the March 29, 1936, Illinois State Journal:

The local concern will distribute in Sangamon county without cost to the recipients, 5,000 black walnut trees to the first 5,000 men, women and children (over 12 years of age) who will sign a membership coupon stating that they will agree to plant the tree they receive. …

The parochial schools of the city, the 4-H clubs of Sangamon county, the Springfield Nature league, the boy Scouts and the Girl Scouts are co-operating in the movement.

The Nature League took over full sponsorship of Booth’s donations in 1937. That year, Booth and the league distributed 10,000 trees of various species: “hard maple, elm, white ash, sweet gum and other varieties.”

Sweet gums made up half of 1938’s 10,000 trees; the rest were sycamores. This time, the trees were offered to sixth-, seventh- and eighth-grade students, and they weren’t quite free: the Nature League called them “onepenny trees.” The Journal again announced the program.

The trees, which will be purchased by the school children for one penny each, will be packed in damp moss and wrapped in paper with complete planting instructions.

Sycamore and sweet gum, trees that lend themselves to city planting and offer interesting trees to study, have been selected this year. 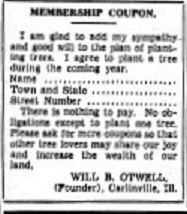 ooth and the League went full sweet gum in 1939 – all 10,000 of the donated trees were sweet gums – and that year, the three-foot-tall saplings were delivered “to the homes of all pupils requesting trees to be planted.”

In 1940, partnering with the Springfield Council of Parents and Teachers, Booth provided 10,000 white ash trees. Booth and Thomas donated 5,000 more ash trees to students in 1941, along with several hundred the firm made available to adults. Booth and the Parent-Teacher group gave away red bud trees in 1943.

The giveaways apparently stopped for the duration of World War II. When Arbor Day tree handouts resumed after the war, the Parent-Teacher council operated the program. Booth was still involved, but apparently just as a booster and adviser.

By the late 1940s, however, city fathers had turned to sweet gums, among other tree species, as replacements for the 4,000 or more American elms killed in Springfield by a viral disease called phloem necrosis. Most of the dead elms were removed in a blitz that took most of November 1949.

Sweet gums were one of the most often recommended replacements. An Illinois State Journal editorial in May 1949, for instance, had sweet gums at the top of its list.

Jess Cowie, Lake Springfield nurseryman, who tends the many thousands of trees on the marginal land of the city water supply, advises replacement of elms with sweet gum, hard maple, white ash and several varieties of oak. Such trees are well adapted to city as well as rural environment, although few can match the great shade canopies of the ill-fated American elm.

Sweet gums don’t begin producing their “gum ball” seed pods until they’re about 20 years old. So A.R. Booth’s sweet gums from the 1930s still would have been immature, its seed pod drawbacks largely unknown, when people sought to replace their elms in the 1940s and ‘50s.

Trees of all sorts remained important in Springfield in the 21st century, and the city was honored as a Tree City USA by the Arbor Day Foundation in 2020.

That same year, the city’s new Urban Forestry Commission and city arborist Jeffrey Reim issued an updated Arboricultural Specifications Manual. It listed 47 species of trees that may not be planted along city streets or parkways. One of them is the sweet gum, on the grounds of “littering fruit.”

“There are many superior street or parkway trees,” the manual says.

A.R. Booth, who also was a life member of the Lincoln Memorial Garden Society and the Vachel Lindsay Association, is buried in Oak Ridge Cemetery.

The Rev. Reinhold George Link was reassigned to a parish in the Grafton area. There, he became the first naturalist at Pere Marquette State Park. He joined the Franciscan order of priests in 1952. He is buried in St. Louis.

Hat tip: To Pete Harbison. Thanks for the suggestion.

This entry was posted in Environment, Prominent figures, Science. Bookmark the permalink.