Springfield’s Reed Waddell often gets credit for inventing the gold brick swindle. He probably was innocent, for once, of originating that particular swindle. But by the time he was shot to death – by a crony in Paris, France – “Kid” Waddell was one of the best-known con men of the 19th century.

Waddell (1860-95), whose last name was pronounced “Waddle,” was a jack-of-all-trades hustler and mountebank. His repertoire included gambling frauds like three-card monte and banco (or bunco), a rigged dice game. He reportedly also pulled off “green goods” scams, which involved selling a victim a large amount of supposedly high-quality counterfeit money (or in some variations, a machine that would print fake banknotes). In a fast switch, the mark would be left with a wad of green paper or a satchel containing mostly sawdust. 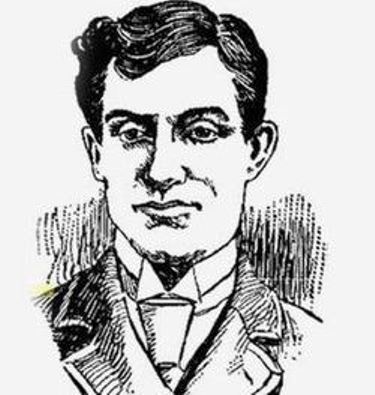 The traditional gold brick was a lead brick plated with gold and containing a single plug of real gold. If a mark was skeptical, he could have the brick tested, but the con man always made sure the assay was done on the portion of the brick that was real gold.

Wikipedia, without citing any clear sources, claims “Waddell sold his first brick for $4,000 and began manufacturing bricks which were sold for between $3,500 and $7,000. He also expanded his operations into the ‘green goods’ or sawdust swindle and, between the two ventures, he reportedly made $250,000 within ten years.”

Another notorious old-time con man, Joseph “Yellow Kid” Weil, told true-crime writer Jay Robert Nash that Reed Waddell was so smooth a con artist that he could – and did – sell the Brooklyn Bridge. The come-on was that someone who controlled the bridge could make a fortune by charging people to cross it. Gabriel Cohen explained in a 2005 New York Times article how that legendary scam worked.

Perpetrators such as Mr. Waddell … were savvy. They timed the path of beat cops working near the bridge, and when they knew the officers would be out of sight, they propped up signs reading “Bridge for Sale,” showed the edifice to their targets, and separated them from their money as quickly as possible.

Although Waddell became famous because of the gold-brick game, he almost certainly didn’t invent it. Merriam-Webster, for instance, reports the first known use of the term “gold brick” as a fraud was in 1865, when Waddell was still a child in Springfield.

The first published mention of what can be identified as the classic Gold Brick game dates to 1879, where it was conducted in Chicago and Kansas City by men known only as “Walker” and “Thomas A. Lewis.” It is likely that these were aliases of one or two of the men mentioned above. Articles that credit Waddell with inventing the scam say that he brought it to New York in 1880. He would have been 19 years old at that point, which argues in favor of one of the older men mentioned above (Train, Leary, Triplett, or O’Brien) as the real originator of the con.

Waddell was born in Minnesota, but his parents, Absalom (1827?-85) and Nancy Waddell (1838-1913) moved the family to Springfield about 1856. Absalom Waddell dealt in horses and frequently entered horses in races and shows around Springfield.

When Absalom Waddell died, a brief obituary in the Illinois State Journal described him as “an old and well known citizen.” After his son’s death, however, a writer identified only as “Winthrop,” the Springfield correspondent of the Peoria Journal, wrote a more biting article about both of the Waddells. The story was reprinted in the April 24, 1895 Illinois State Register.

By the time he (Reed Waddell) was 7 or 8 he was known in the neighborhood of Washington and Eleventh streets, east, as about the toughest, foulmouthed boy in that section. He early followed off after his father, and took to that life very naturally, they say. …

The gamblers, who all knew him, do not care to talk to a stranger about him at all, but other citizens here think he gave the house to his mother that she has lived in, since the house they used to live in was sold at trustee’s sale some years ago. …

All the men here who ever used to follow the races in the time (when) the elder Waddell … was in the business, unite in saying that he was the meanest man they ever knew in that line. He had not the first redeeming manly quality. The boy, however, had. He was a good figure and dressed well, and could on occasion go into any society. 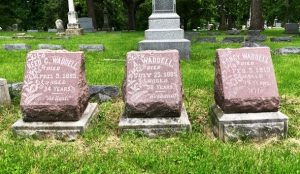 Graves of the Waddell family at Oak Ridge Cemetery (SCHS)

Reed Waddell was a precocious criminal. Newspaper files show he was indicted at age 17 in connection with a confidence game of some kind in Carlinville. By 1880, when Waddell was 20, the Illinois State Register reported he had been arrested again, this time on a gambling warrant out of Tolono: “Waddell is notorious among police circles here, and they will be glad to hear that he receives the full penalty of the law at his trial in Tolona (sic).”

Commercial Alley (the alley behind the west side of the 200 block of South Sixth Street) harbored public gaming houses and was a hang-out for confidence operators. Reed Waddell, who became internationally notorious as a gold-brick man, and who was murdered in Paris, had his training in this environment.

Waddell apparently made it to New York City in the early 1880s, although newspaper stories suggest he kept his hand in in central Illinois from time to time. In 1894, money from Waddell, with help from rogue Springfield alderman Evan “Tom” Brewer, allowed two of Waddell’s sometime accomplices, Frank Doggett and Red Austin, to bail themselves out of the Pike County Jail. Naturally, they jumped bail and disappeared.

Waddell was working with one of his New York mentors, Tom O’Brien, in Paris in March 1895 when the two fell out – over either a woman or Waddell’s refusal to give O’Brien $10,000. The two fought on March 26, 1895 in the Café Americain, and Waddell hit O’Brien in the head with a bottle. The next day, O’Brien encountered Waddell at the Gare du Nord train station and shot him. Waddell died on April 5.

At his trial, O’Brien claimed he killed Waddell in self-defense. O’Brien’s attorney, identified as Maitre Demange, argued, according to the New York Times, “that there had been an exchange of shots, which was an ordinary way of settling quarrels in America.”

O’Brien was convicted and transported to prison in the French Caribbean, possibly to the notorious Devil’s Island. He died in prison.

Nancy Waddell had her son’s body brought back to Springfield. He is buried next to his mother and father in Oak Ridge Cemetery.