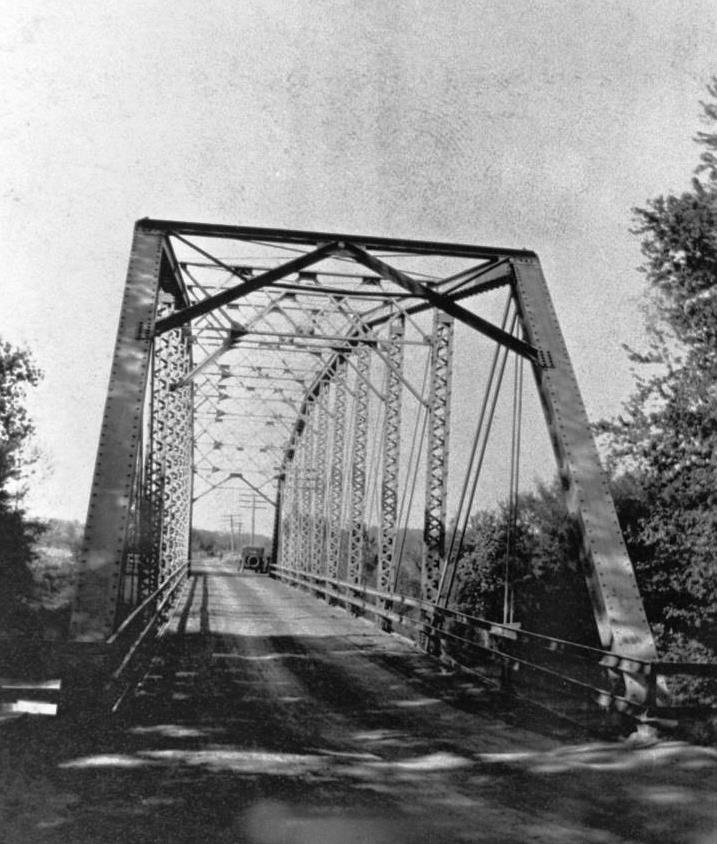 The Chinkapin Bridge northwest of Springfield carried travelers across the Sangamon River to and from Cantrall and points north for 60 years or more.

It was replaced by a new bridge, a short distance east on what is today Illinois 29, in 1933. Parts of the old road to Chinkapin Bridge were sold off, and the bridge site became reachable mainly by boaters.

The Chinkapin Hill neighborhood, the bridge’s namesake, was settled in the 1830s by a cluster of African-American farmers. It’s unclear when the first Chinkapin Bridge was built, but it probably was before 1870. The Illinois State Journal carried a short notice on March 10, 1870:

A new post office, called “Chinkapin,” has recently been established near Sangamon river, on the mail route between this city and Athens, Martin V. Rites, Postmaster. The office will prove very convenient for the people in that immediate neighborhood. 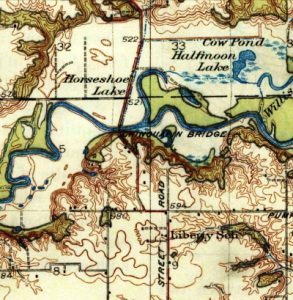 From U.S. Geological Survey map, 1930. Posted on Bridgehunter.com by commenter “Tim” in July 2015

The single-lane bridge was on an unpaved trail known as the Chinkapin Road or the Athens Road. Except for those going to Cantrall or Athens, Chinkapin Bridge was a secondary route for people crossing the Sangamon. Most travelers used Carpenter’s Bridge farther east (on today’s Peoria Road) – if, of course, they didn’t go by train in the first place.

Modest though it was, the Chinkapin Bridge was important to the county’s transportation system. The Journal took note in February 1883, when the county was inundated by a flood and the Sangamon washed out the recently rebuilt bridge at Carpenter’s Mill.

At Chinkapin, the Journal said:

The levee leading north from the bridge is thought to be in danger. The pressure of water against it is very great and the three or four culverts are inadequate to relieve it. Should this levee be badly broken it will prove a serious loss to the city and county.

During the 1880s and ‘90s, the Chinkapin Bridge, and especially its approaches, frequently needed repairs. The bridge was even chained down during an 1893 flood “to prevent, if possible, its being carried away,” the Journal reported.

The county built a new bridge and raised the north side levee in 1901, but that turned out to be only a stopgap. County commissioners closed the Chinkapin Bridge in 1912, “giving it as their opinion that the bridge might fail at any time,” the Journal said.

That structure was replaced by a steel span bridge with concrete abutments. The new $14,500 Chinkapin Bridge opened to traffic on Sept. 20, 1913.

The bridge site was secluded, and traffic on even the rebuilt bridge was sparse. When the body of Benld bootlegger/dance-hall king Dominic Tarro was found in the Sangamon west of Chinkapin Bridge in 1930, authorities speculated that his killers took him to the bridge, tied his hands and feet, and threw him off. 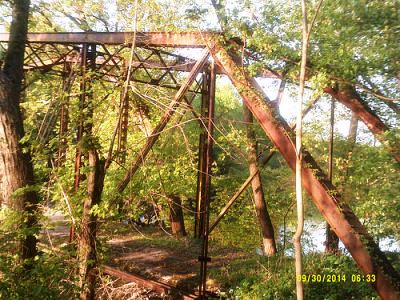 Abandoned Chinkapin Bridge in 2015, according to date given by photographer (Elliott Johnson on Bridgehunter.com, Creative Commons non-commercial license)

As auto traffic increased, the one-lane bridge became more and more out of date. However, local officials argued, the route the bridge made accessible was crucial to Illinois as a whole.

In the one hundred million dollar bond issue system, there is no road of such short length that is so important to so many people or that affects more hard road mileage. With this road in operation the congestion over routes four and twenty-four between Springfield and their junction north of the river will be relieved. …

The strategic position of this highway, affecting a very large proportion of the north and south traffic through the state and and all of the traffic between Chicago and St. Louis, is worthy of serious consideration and it’s upon that point that emphasis should be laid.

Sangamon County proponents envisioned a “Chinkapin hard road” that essentially followed the historic path to the site of the old bridge. However, state planners adopted a slightly different route. The Journal reported the announcement in October 1931:

The new bridge will be located some distance east of the present Chinkapin bridge in order to eliminate several sharp turns in the present road, (state highway engineer Frank) Sheets announced. He could give no estimate as to what the structure would cost, but said it would cost a considerable amount of money, inasmuch as part of the structure will extend over overflow land.

The new bridge opened in 1933. The realigned road to Cantrall and Athens, known at first as Walnut Street Road or State Route 24 (and unofficially as the Horner Highway, named after then-Gov. Henry Horner), was designated Illinois 29 in 1940.

Some motorists traveled to Chinkapin Bridge for a while longer, if only for excursions. But the state eventually sold off the right-of-way and even pieces of the bridge abutments.

Chinkapin Road still runs for about a half-mile off Camp Sangamo Road north of Abraham Lincoln Capital Airport, but it dead-ends at private property south of the bridge site.

This entry was posted in Local government, Transportation. Bookmark the permalink.