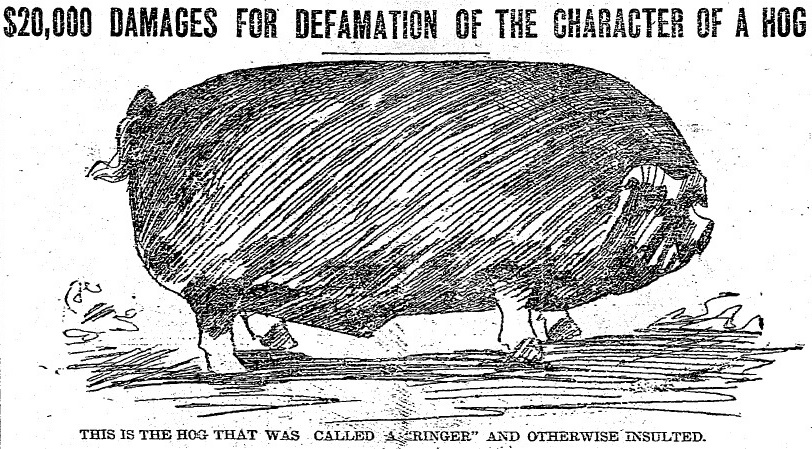 Illustration of Klever’s Model from the Evansville (Ind.) Courier, May 8, 1899. The hog’s white feet were important in its identification. (Evansville Courier)

The world of Poland China swine revolved around Williamsville in the 1890s, thanks to stockman George G. Council and his prize boar, Klever’s Model.

When Council (1864-1944) put Klever’s Model up for sale in 1897, a syndicate made up of nine Poland China enthusiasts, mostly from Western states, bid $5,100 for the boar. It reportedly was the highest price ever paid for a hog in the U.S.

So it was a major scandal when Council’s hired man claimed the record-setting boar wasn’t Klever’s Model at all. The hired man, Arthur Thelander (or Thielander), said Klever’s Model had died before the sale. The boar sold at auction actually was a run-of-the-mill Poland China named Columbia Wilkes, he said. Its value was put at $40.

One of the most vivid accounts of the case was published in the Evansville (Ind.) Courier in 1899.

The story of Council, the syndicate, and the hog is a long one, but every child in Sangamon county knows it by heart. It began in 1897 at the state fair grounds in Springfield. Council decided publicly to auction off a famous hog he owned, known as Klever’s Model. The hog came of an ancient and highly respected race, and his fame was known the county over. So when he was put up on the block … to be sold to the highest bidder, stockmen from all over the country were there anxious to secure the prize. …

The hired man said he had been with Klever’s Model when it lay down and died, had been chief mourner at the funeral and had acted as undertaker for the deceased porker. He related how at the dead of night, by the sickly glare of a barn lantern, he had laid Klever’s Model in a grave. The next day, he said, Council built a straw stack over the grave and put a … low-born hog, Columbia Wilkes, in the place formerly occupied by Klever’s Model.

Thelander’s allegation left the syndicate in danger of losing serious money. The hog the group bought had sired anywhere from 600 to 1,000 offspring, but with the boar’s identity in question, none of the young pigs were eligible to be registered as Poland Chinas.

The syndicate hired an investigator to dig up the remains under the straw. The exhumation unexpectedly turned up skeletons from two hogs. Council, however, said both had died of hog cholera and neither was Klever’s Model. The syndicate owned the legitimate hog, he said.

The syndicate men, however, were not satisfied. They took the hired man over to see the hog they had bought and the hired man pointed his finger at it and said, like the hero of a melodrama, “I know you now. You are not the aristocratic Klever’s Model, but the base born Columbia Wilkes.”

Thelander told the same story to a Sangamon County grand jury, which indicted Council for fraud. But before Council could go to trial, Thelander changed stories and said he had lied when he claimed Klever’s Model was dead. As the Evansville paper reported:

The state’s attorney thought this settled the matter and dismissed the case, but it was not to end here. The syndicate members claimed Thielander had been bribed, a position in which they were enthusiastically sustained by the versatile Mr. Thielander himself …

Council sued the syndicate for the remaining amount he was owed for the putative Klever’s Model, about $1,600. Thelander, back on board, testified in the first trial of that case in February 1899 that he had reversed himself after Council told him “if he did not quit talking about the hog, that they would both be sentenced to the penitentiary.”

The first jury was unable to reach a verdict, and the judge declared a mistrial. The case went before a second jury in April.

More than 80 witnesses took the stand, according to the Evansville Courier. This time, the paper said:

Council won his suit by checkmating a move of the defense. The defense had exhibited to the jury the hog which they had bought as Klever’s Model, but which they said was Columbia Wilkes. Council went out to his farm and came back with a hog that he proved to the satisfaction of the jury was the original Columbia Wilkes.

Another key moment took place when Bloomington artist Lou Burke produced a drawing of Klever’s Model he had done in 1896. “He was positive that the hog in dispute was Klever’s Model,” the Illinois State Register reported. So were 25 of the 29 witnesses who testified as to the identity of the hog, the Register said.

This time, the jury found in Council’s favor, but it may have been a Pyrrhic victory. Lawyers and travel expenses for witnesses, who came from across the country, cost both sides a total of $10,000 or more, according to newspaper estimates. It’s unknown how much of that Council paid, but his lawsuit undoubtedly cost him far more than the $1,600 he was owed.

What’s worse, Council apparently believed, was the damage the controversy had done to his good name. Shortly after the second verdict, Council sued Charles Vigal of New City, who had written an article for a farm journal “intimating,” as the Illinois State Journal put it, “that Council was several kinds of swindler.” Vigal wrote the account, Council charged, “for the purpose of injuring his standing as a man and his credit as a stock dealer, and what is most important, that it had the desired effect.”

Council sought $20,000 in damages. However, the suit was eventually dropped, apparently without any payment by Vigal.

The last legal word on the Klever’s Model controversy may have been said in 1901, when George G. Council, his finances if not his reputation in tatters, declared bankruptcy. Property he owned in Sangamon County and in Nebraska was sold at the door of the federal courthouse in Springfield.

Council was a resident of Greenville, Miss., when he died in 1944. He is buried there.

This entry was posted in Agriculture, Animals, Farming, Prominent figures. Bookmark the permalink.