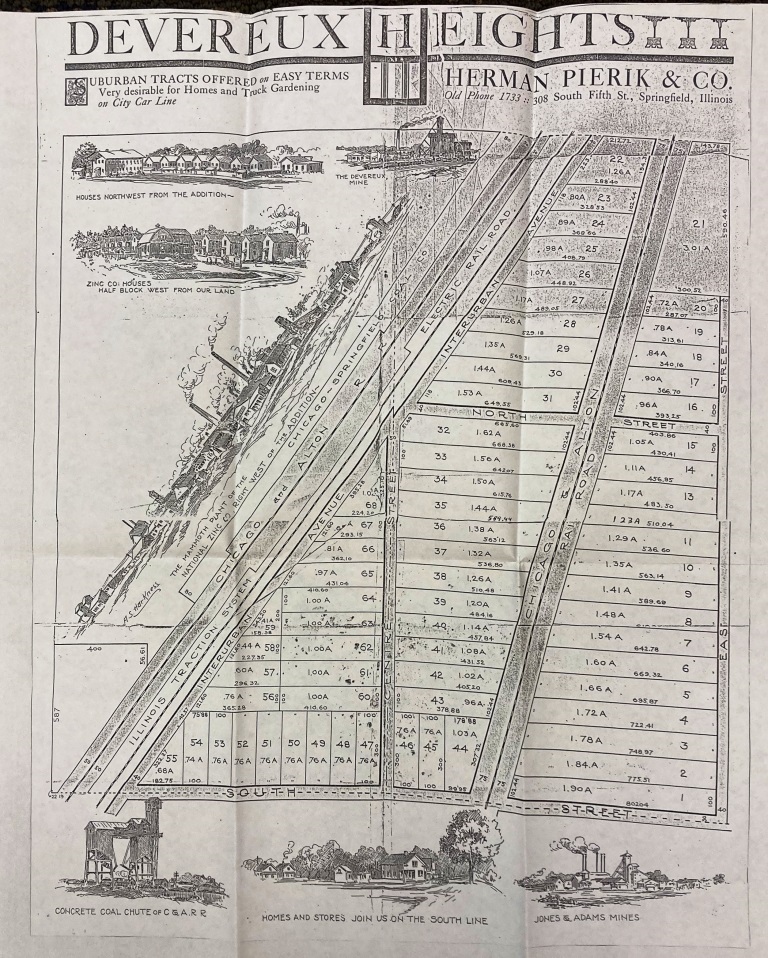 The zinc works, shown diagonally, dominated a promotional map when the subdivision of Devereux Heights was developed in 1913. (Sangamon Valley Collection)

The smelter, owned first by the United Zinc & Chemical Co. and then the National Zinc. Co., operated off Peoria Road generally northwest of Devereux Heights from 1907 until late 1918. It employed up to 350 people, many of them Spanish, most of those probably from Asturia, a region of Spain known for its mining and zinc production. Asturians worked in zinc smelters all over the U.S. in the early 20th century. Zinc was used primarily to galvanize (rustproof) steel.

The plant was built on an initial 30 acres donated to United Zinc by the Chicago-Springfield Coal Co., which operated a mine next door. In his book The Little Village That Could: The Untold Story of Devereux Heights, Kenneth Mitchell gives a “rough estimate” of the zinc plant’s location as Catalina Lane on the north, Norman Road on the west and the Chicago & Alton Railroad – today’s Union Pacific – to the east.

Building the zinc plant next to the mine was good for both companies, since the deal called for the smelter to buy 100 tons of coal daily from the mine – a large-scale regular buyer was a big plus in the notoriously seasonal coal mining industry. Being next to the railroad made it easy to bring in zinc ore and ship out smelted zinc. 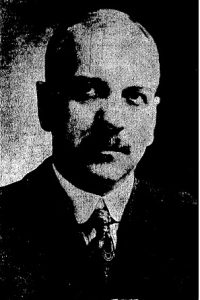 The president and chief stockholder of the Chicago-Springfield Mine Co. was Harry Devereux (1866-1926), who was mayor of Springfield from 1903 to 1907.

The deal was announced by John Neher, secretary of the Springfield Business Men’s Association, on Feb. 12, 1907. According to the Illinois State Journal’s story:

Mr. Neher says this company will build a plant that will cost $100,000 to $125,000 and it will employ 150 men at the start. Later, he says, 250 men will be employed. The same company has smelting plants at Iola and Argentine, Kan., and at Leadville, Colo. Work on the Springfield plant, it is said, will begin at once, and that the plant will be running by September 1.

The zinc works actually started smelting, with 90 workers, on Oct. 27. Construction was still going on.

“The plant includes two immense furnace buildings, constructed of wood with steel covering. Each furnace is supplied with three hundred and twenty retorts with which the zinc is smelted from the ores,” the Journal reported.

United/National Zinc apparently prospered for a time in Sangamon County. By 1911, the plant’s 350 employees were taking in a monthly payroll of $18,000. The plant also did well during World War I, when the company acquired several government contracts.

Herman Pierik & Co. developed the subdivision of Devereux Heights (named after Harry Devereux) across the C&A tracks east of the zinc works in 1913.  The neighborhood’s proximity to jobs at the zinc plant and at two coal mines – the Jones & Adams mine as well as Devereux’s Chicago-Springfield mine – was a major selling point. (See development brochure above.)

But labor/management relations were rocky at the zinc works. Workers went on strike in both 1917 and the summer of 1918.

Sheriff’s deputies were called to 15th Street and Sangamon Avenue in February 1917, after rumors spread that striking zinc workers were massing to attack employees who had kept the plant’s furnaces on “dead fire.” If the fires had gone out, “the insides of the furnaces would crack and a heavy property loss to the company would result,” the Illinois State Register said.

No attack took place, and a strikers’ committee later told general manager Otto Rissman they wouldn’t use violence to enforce the strike. However, three strikers, two of them Spanish, were arrested on a variety of charges.

“A number of other Spaniards who are said to have been taking a leadership in the strike movement are reported to have left the city when it was learned that some of their companions had been arrested and taken to the county jail,” the Register reported.

Reoriented depiction of the zinc works from the Pierik brochure (the artist was the talented Alfred S. Harkness).

Rissman said the company couldn’t give in to the strikers’ demand for a 10 percent wage increase.

“The American workmen at the plant are perfectly sensible about the whole matter,” Rissman said. “The only trouble is coming from other elements, but in spite of this fact I feel sure that the strike will be ended peaceably within a few days.”

The workers went out on strike again in June 1918, this time seeking a raise to 75 cents an hour. Despite a fiery statement of support from John Walker of the Illinois Federation of Labor – he said owners were treating workers in war industries “worse than the Kaiser himself is treating people over there” – that walkout also seems to have ended unsuccessfully.

“Workers at the National Zinc company’s plant on Peoria Road have all returned to work with the exception of a few striking Spaniards who are still holding out, and it is thought that the troubles are near settlement,” the Journal reported July 3.

The plant’s labor troubles may have contributed to its closing in December 1918, but other factors probably played bigger roles: sagging postwar prices for zinc, transportation costs for raw materials, and the fact that natural gas had turned out to be a better fuel than coal for zinc smelting.

The Journal announced the closure on Dec. 11, 1918, a month after the armistice ended World War I.

When the local plant of the National Zinc company closes down December 20, one of Springfield’s greatest industries for years will probably pass out of existence. Two hundred men are at present employed at the local smelter.

The local plant has been forced to close because of the unstability of the zinc market, caused by the dropping of the price of zinc during the last six months. Since the outbreak of the war until that time, the local smelter had been filling large war orders which were responsible for the employment of a large force of workmen.

According to the statement made yesterday by the manager, there is enough ore on hand to keep the plant in operation for a period of about ten days. After this supply is exhausted the plant will be closed.

Following the closing, at least three nearby farmers sued the National Zinc Co., saying their crops had been ruined by fumes from the plant. In the only trial reported in newspapers, two chemists testified the plant wasn’t to blame for the plaintiff’s crop failures, and the jury decided in favor of the company.

However, some pollution probably remained. One of Kenneth Mitchell’s interviewees, Gene Weyant, said the former zinc site “has around six feet of ash or cinders over it to separate it from the material that lies underneath, left, presumably, by United Zinc.”

The zinc plant sat vacant for almost a decade. Finally, in 1927, a Chicago-based salvage operation bought the 44-acre site, demolished the 24 buildings and sold off the pieces. Included were “machinery of every description, steam boilers and probably five hundred tons of retorts,” the Journal said, adding:

“The old zinc works, also known as the smelter works, was once a familiar landmark, its huge blast furnaces being visible for miles around.”

Hat tip: To Ken Mitchell, whose 2019 history, The Little Village That Could: The Untold Story of Devereux Heights, pointed SangamonLink to the story of the zinc works. The book is available at Noonan’s Hardware on North Grand Avenue in Springfield and from Mitchell himself.