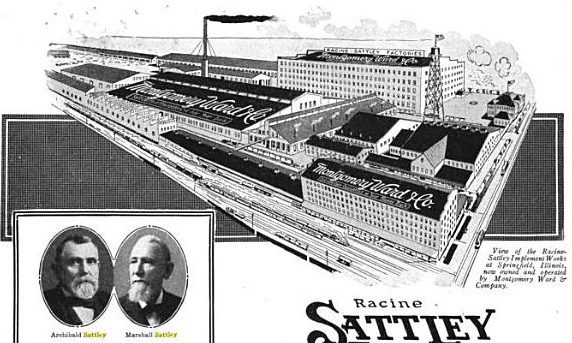 The Racine-Sattley plant, with inset photos of Archibald and Marshall Sattley, from 1917 advertisement 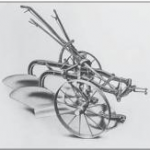 The firm originated in 1851 as a small farm-machinery manufacturer operated in the Rochester area by brothers Archibald (1837-1901) and Marshall (1831-1907) Sattley. Sattley Manufacturing was formally established in Taylorville in 1858 and remained there until the brothers relocated to Springfield about 1888.

The new Sattley plant covered a four-square-block, seven-acre site on the southeast corner of Ninth Street and South Grand  Avenue.

Sattley merged with the Racine Wagon & Carriage Co. of Racine, Wis., in 1903 and took the name of Racine-Sattley Manufacturing. Products included the Wonder Gang Plow (above, about 1915).

Racine-Sattley was purchased in 1916 by Montgomery Ward & Co. and renamed the Hummer Plow Works (at the time, the Hummer was the plant’s best-known plow model).  The plant had 500 employees in 1912.

This entry was posted in Business, Industry and tagged Farm equipment. Bookmark the permalink.