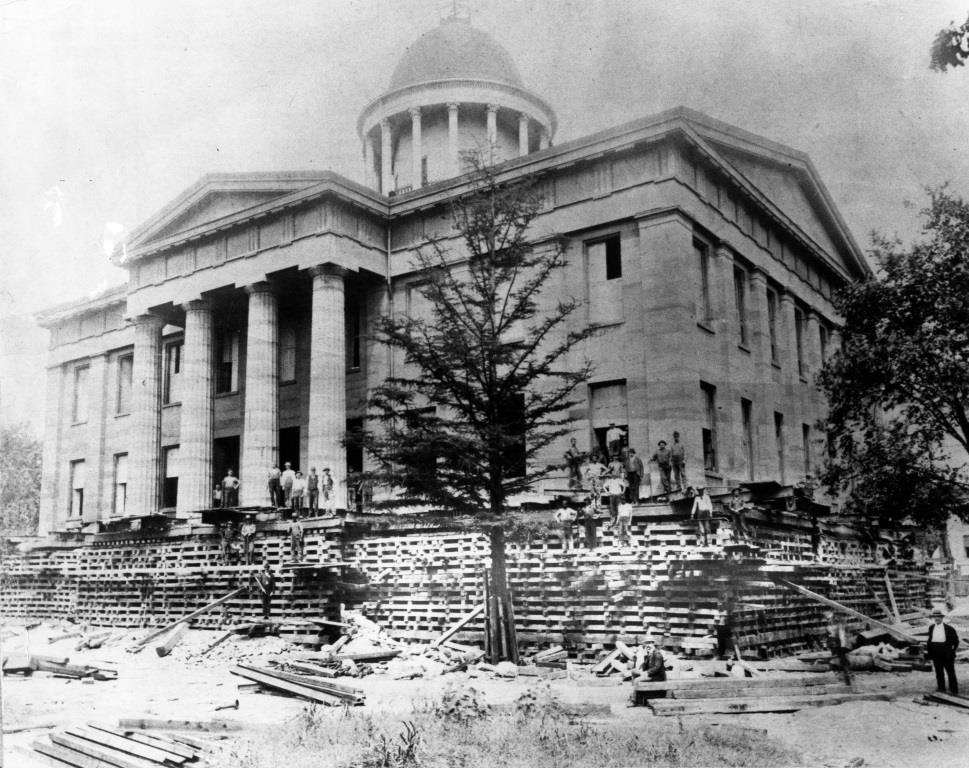 It took a crew of 80 men to raise the Sangamon County Courthouse 11 feet in 1899, working at a rate of eight inches a day.

County offices and courts had occupied the building – today’s Old Capitol State Historic Site – since 1876, when the county bought the former capitol from the state of Illinois. But by the end of the 19th century, the structure was showing its age, as H. Douglas Giger wrote in a 1901 pamphlet, “The Story of the Sangamon County Courthouse.”

The old state house, being large and spacious, served eminently for a courthouse, and for many years was amply sufficient for the needs of a county building. But the county was rapidly growing in population and wealth, and the business necessarily transacted at the courthouse gradually increased, until it became apparent that, sooner or later, more room must be provided.

Another matter which began to be taken into account was the condition of the building with regard to fire. Indeed the old state house seems to have been constructed without taking danger from fire into consideration at all except that the office of the state treasurer (used by the county for the recorder’s office) was provided with a so-called fire-proof vault. The remainder of the building, and especially the roof and dome, would in these days be called “a veritable fire trap.”

County officials briefly considered demolishing the old capitol and selling off three-quarters of the downtown square, with the proceeds to be used to build a new courthouse. “This idea met with violent opposition,” Giger wrote, because of the building’s historic connections to Abraham Lincoln.

The county board then approved a $50,000 remodeling plan, which envisioned no change in the exterior of the courthouse, and hired the Warren Roberts Co. of Chicago to do the work. County officers moved to temporary quarters, mostly in the International Order of Odd Fellows Building at Fourth and Monroe streets.

Roberts began work in May 1899. Shortly afterwards, however, it became obvious the planned remodeling still wouldn’t create enough room for the growing county.

A a result, the county board revisited a plan it had rejected previously “as an utter impossibility.” That was an idea brought forth by architect Samuel J. Hanes (1862-1946); he had proposed jacking up the former capitol – a 90- by-120-foot building, two-plus stories high with a cupola, an ambitious project in any era – and adding a whole new first floor.

Warren Roberts agreed to the change for an extra $27,850. Roberts brought in thousands of wooden beams and more than 1,000 building jacks, and what Giger called “the greatest feat of engineering skill ever attempted in the county” got under way on Aug. 7, 1899.

An anonymous writer for the Illinois State Register described the project’s progress midway through the lift:

The task of raising the court house is no small undertaking, but when one looks at the great pile of rocks being lifted into the air, by a few men with iron bars and jacks, he thinks it is indeed a great one. The first thing the on-looker thinks of when he enters the enclosure and looks at the building is, “What if it would fall.” The foreman of the force working on the building says he has heard this question many times. Architect Hanes says there is no danger of the building falling. Several little cracks have appeared in the walls, but they are not considered seriously …

At noon yesterday the building had been raised five and one-half feet. This is exactly half the distance it is to go. This work was done in a few days more than one week, making about 8¼ inches a day. Another week, unless some unforeseen accident or trouble occurs, will see the big structure eleven feet from the ground and ready for the new story which is to be built under it. 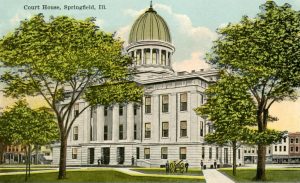 Earl W. Henderson (1931-2016) was one of the architects who designed the Old Capitol in the 1960s, when the first floor was removed and the building restored to its appearance as Lincoln knew it. When Newlyn Hosea interviewed Henderson for the Abraham Lincoln Presidential Library’s oral history program in 2010, Henderson recounted what he had been told about the process of raising the old courthouse.

In any event, at least the story I’ve told many a time at service clubs and others (was) a big Chinese gong was right at the corner of Adams and Fifth Street. A black man stripped to his waist would swing a mallet and hit the gong, and at that signal everybody would turn their jack a quarter of a turn. Very exciting to me because they raised that building eleven feet in the air in twelve days. (SangamonLink editor: Elapsed time between the start of work and when the building reached its final level actually was 16 days, which conforms to the “eight inches a day” progress usually cited.) I have pictures and all kinds of archives have pictures of the building on this whole first level of these railroad ties all stacked up all the way through. It’s a very impressive piece of engineering.

The building reached its full height on Aug. 22, 1899, after which Springfield’s Culver Construction Co. replaced the wooden pilings with stone. When Culver finished in October, the Roberts company went back to work on the interior.

Five thousand people toured the expanded courthouse during reopening ceremonies on April 29, 1901. All those in attendance received a copy of Giger’s courthouse history pamphlet.