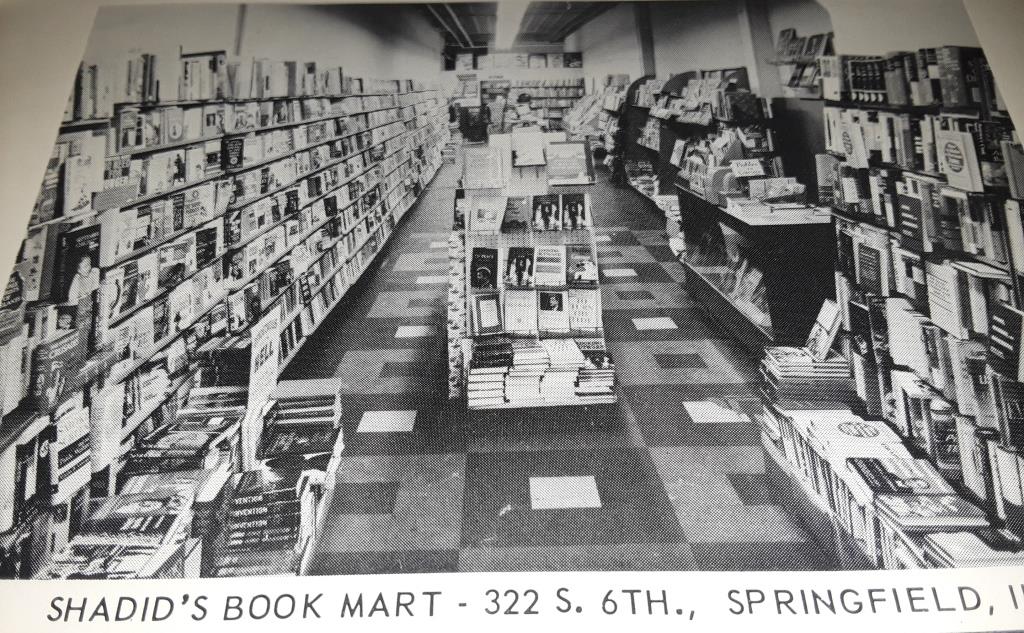 Shadid’s sent postcard reminders to patrons who had ordered books. The front of the cards showed the crowded aisles of Shadid’s Book Mart. (Courtesy Susan Hines)

Shadid’s Book Mart began business at 322 S. Sixth St. on Aug. 4, 1958, after Mitchell, Woodrow and Phillip Shadid bought out the stock of a defunct book store downtown. The brothers at first called their shop the “Mag & Book Super,” but quickly changed the name to Shadid’s Book Mart. That name would become well known in Springfield for nearly four decades.

The Shadid brothers previously sold newspapers, magazines and paperback books from corner newsstands at Fifth and Washington, Fifth and Monroe, and Sixth and Monroe streets. Mitch operated the Sixth and Monroe stand starting in the early 1930s, and when he entered the Army Air Corps in April 1942, Woody took over the location.

Woody left for induction into the Army in October of the same year, so, to keep the stand operating, their father, Sam Shadid, managed the news outlet. He also owned a restaurant, the U&I Cafe at 209 N. Sixth St. Two of Sam’s brothers, Nick and Eddie, worked at the U&I, and three of Sam and Samia Anna Shadid’s daughters – Linda, Gladys, and Dorothy – were waitresses in the restaurant.

Sam (1885-1965) and Samia (1896-1964) immigrated from Lebanon in the early 20th century. They both were born in the same town in the old country, but didn’t meet until 1911 in Sherman, Texas. They married on Dec. 31, 1911. Before moving to Springfield in 1919, the couple lived in Healdton, Okla., and then Jacksonville and Pontiac, Ill. They operated restaurants in the two Illinois cities.

The U&I closed in 1944, but Sam still ran the newsstand. The boys came home safely from World War II and returned to the stand in late 1945. Woody also gained control of the Fifth and Washington location; they would secure the Fifth and Monroe newsstand several years later. 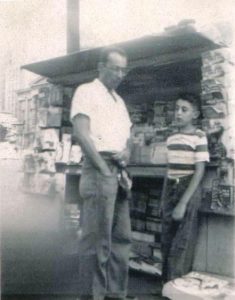 Woody and a young Phil Shadid at the  Fifth and Washington streets newsstand, 1949 (Shadid family)

A chance to get out of the weather saw the Shadids open a small shop, which they called The News Nook, at 229 S. Sixth St. in 1946. Sam ran that spot for two years, but it closed because the landlord wanted to convert it into additional space for another tenant.

By the 1950s, television had changed the news business dramatically. Magazines and paperbacks continued to sell, however, and the Shadids’ 1958 purchase of the stock of books and an empty store resulted in a business that lasted for 37 years.

Shadid’s Book Mart weathered such challenges as the opening of White Oaks Mall in 1977 – a bookstore was among mall tenants – and the decrease in the number of workers in downtown Springfield. Sales slid for a while, but then rebounded somewhat, and personalized service kept the store profitable. Hundreds of loyal customers came back to the store year after year.

Phil Shadid sold his share to Mitch (1912-2000) and Woody (1922-2018) in 1960, when Phil went to work for the U.S. Post Office. Mitch retired and sold out to Woody in 1977, although he still came to the store nearly every day to help. Woody took over all the ordering of books and meeting with salespeople after Mitch’s retirement.

Mitch, who had been a pretty fair right-handed pitcher in Muni League baseball in the 1930s, also was heavily involved in youth baseball, from Little League to Pony League to American Legion, as a coach and administrator. He was chosen the 1978 Copley First Citizen because of his contributions to youth sports.

Shadid’s Book Mart always operated on a shoestring, as the Shadid brothers put much of their profits back into the business. The inside of the store – with its long, narrow aisle, racks and racks of books and magazines lining both sides, and an island about one-third of the way into the store – was aptly described as a hole in the wall. The arrangement made a tight fit for browsers, but that didn’t deter book enthusiasts. A State Journal-Register photo taken at lunchtime in 1984 showed a dozen people crowded into the store. 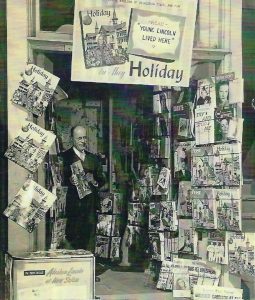 That was part of the Book Mart’s appeal. A reader could browse the stacks and almost always find something of interest – maybe scan a few pages and buy a book, plus a couple of magazines and a paperback.

If Shadid’s didn’t have a book you were looking for, you could ask and an order would be placed quickly. Mitch made frequent visits to the post office late at night with envelopes full of book orders, postage already attached, so that the orders were immediately on their way to wholesalers or publishers. When an ordered book arrived at the store, the customer would be called immediately. If Shadid’s got no response by phone, a preprinted postcard was mailed to the customer the same day.

The bookstore started out on a Monday-through-Saturday basis and originally stayed open until 10 p.m. A lot of business came as a result of the store’s location; the Leland Hotel was across the street and the Abraham Lincoln Hotel just a block away. After the hotels closed and downtown traffic dwindled, Shadid’s eventually cut its closing hour to 5 p.m.

Early advertising in local newspapers featured references to the store’s large supply of books, magazines, greeting cards, and newspapers from around Illinois and elsewhere. Shadid’s even got a mention in a Time magazine advertisement placed by the American Bookseller Association. The Illinois State Register editorialized in September 1958, “Here in Springfield, to complement the complete coverage presented daily by the local press, the Shadid Brothers’ new book store on 6th Street offers out-of-state newspapers from the four corners of the U.S.A.” To help celebrate its first anniversary in 1959, the store was awarded a contract to provide magazines for the Springfield School District’s junior and senior high schools.

Many legislators found their way to the store, as did celebrities. Former baseball player and TV host Joe Garagiola had a book signing at the store in 1960. Pearl S. Buck, winner of the Nobel and Pulitzer prizes for literature, came in one day and asked Gladys Walton (sister of the owners) if she had Buck’s newest book. Gladys (1920-2003) an avid reader herself, said the new book was fine, but The Good Earth was the best book Pearl Buck ever wrote. Buck then introduced herself, much to Gladys’ surprise, and proceeded to tell of her time in China and how she came to write her best-seller. Before leaving, she bought a bunch of books.

Comedian Red Skelton, in town for an Illinois State Fair appearance and staying at the Leland, came into the store, and before long he and Gladys were trading jokes. Finally, at the checkout paying for his purchases, he said, “Look, lady, I’ll take care of the jokes, and you take care of the books.”

In the early years, Gladys worked basically for bus fare after her mother urged her to “Help the boys; they can’t pay you until after the store is doing better.” Over the years, many family members pitched in. A local banker once told Woody, “You guys would be out of business if it wasn’t for the family working for nothing.” 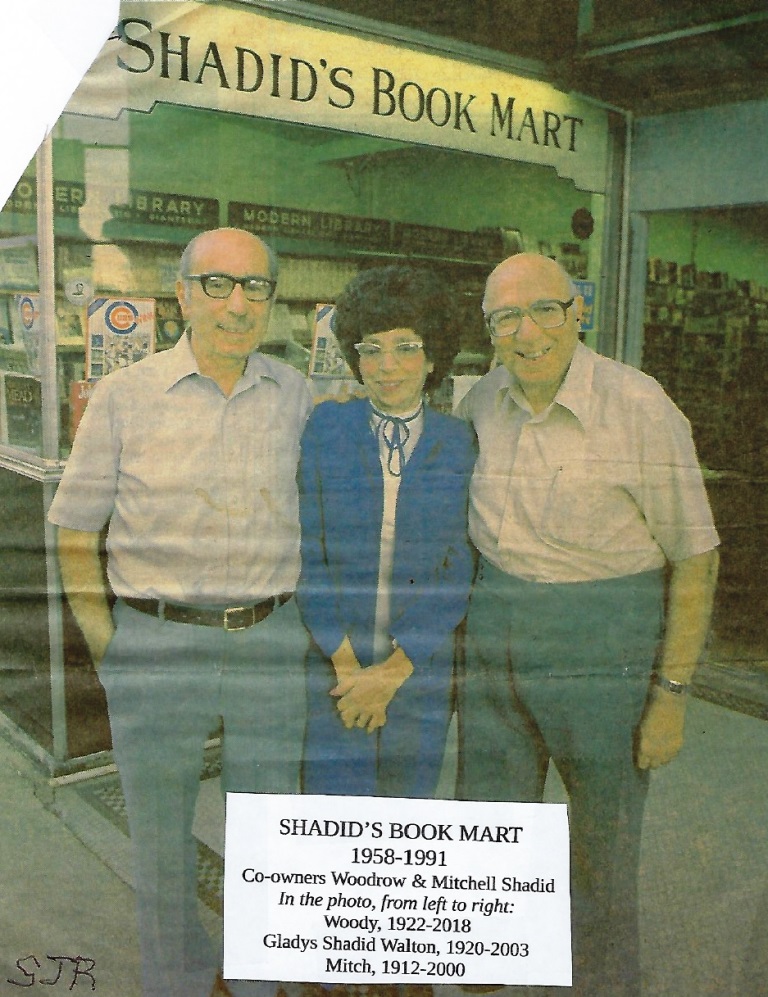 Mitch’s wife Frances (1909-2008), Woody’s wife Crystal and another Shadid sister, Linda Naufel (1916-2010), all worked at the store. Linda loved the joke, “We really didn’t work for peanuts, but it may have been for walnuts.” Crystal was the bookkeeper. She had been a secretary for executives of International Harvester in Chicago and later worked for the 3-M Company.

Frances’ love of books was apparent, considering that she’d been a teacher and librarian in her home state of Washington. She and Mitch had often talked of starting a bookstore before the brothers teamed up to make the store a reality. Frances loved the store, and her pride in the children’s book section built a clientele of engaged parents. Her experience led to her last job as administrative assistant to the director of the Illinois State Library for ten years. (Phil’s wife, Betty, a nurse, never worked at the store, although she enjoyed all kinds of books, especially novels about the Old West.)

Alertness by a young member of the family in November 1959 prevented possible fire damage to the store. Gary Naufel, Linda and George’s son, was helping his dad build a bookcase in the stock room when he spotted flames leaping from a window in the building next door. George called the fire department, which put out the blaze without any damage to the bookstore. Gary also worked at the store the summer between graduation from high school and enrolling in college.

Children of the owners helped at the store. Mitch and Frances’ daughter, Maurene Broms, worked there and remembers helping take inventory once a year. That would have been quite an undertaking, considering the store advertised that it was the home of 50,000 books. Woody and Crystal’s daughter, Lisa Koleske, helped with special sales events at a separate building behind the store, which was used as a warehouse because of the ever-increasing volume of books. Her brother, Woody Jr., also worked at the store and helped with the move when they changed locations in 1989. Eventually, non-family people were hired to work at the bookstore.

For a brief time, the Shadids operated bookstores at Springfield College in Illinois (in the Brinkerhoff Home) and Sangamon State University (now the University of Illinois Springfield), although not at the same time. Another sister, Dorothy Bahre, handled book transactions at the colleges.

In 1989, the bookstore moved to 229 S. 6th, the original address of The News Nook. Two years later, Woody decided to retire and put the store up for sale. Barbara and Bob Young bought the store, kept the name, and ran it for four more years. It closed in March 1995, a victim of competition from bookstores in the mall and other shopping centers.

After nearly six decades of selling newspapers, magazines, and books, the Shadids were officially out of the business. They never really worked for anyone but themselves.

The popularity of Shadid’s Book Mart long after the last book was sold was reflected on the “Memories of Springfield, Illinois” Facebook page in September 2020. More than 450 people responded to a photograph of the inside of the store, and dozens of comments were made by former customers who fondly remembered the place and its people.