The radical sympathies of Springfield labor activist George Thomas Voyzey (1893-1950) got him in trouble with both local authorities and other union leaders.

Voyzey served as chairman of the Springfield affiliate of Save the Union, a miners’ group that broke ranks with the United Mine Workers of America to oppose its national leader, John L. Lewis. Voyzey ran against Lewis for the presidency of the UMWA in 1924. Voyzey also was elected Illinois president of the National Miners Union, a successor group to Save the Union. The NMU was backed by the Communist Party of the USA, and Voyzey is generally acknowledged to have been a Communist.

Voyzey was born in Pennsylvania, but the family moved later to Sangamon County, where his father, John, worked as a mine examiner and manager.

George Voyzey went to work for the Tuxhorn Coal Mining Co. He also joined the UMWA and became a union activist. When streetcar workers went on strike against the Springfield Consolidated Railway Co. in 1917, a court issued an injunction ordering Springfield union leaders not to encourage a streetcar boycott or threaten employees who stayed on the job. Voyzey was among several hundred union officials named individually in the injunction

Voyzey’s status and actions during World War I are unclear. He served in the U.S. Army, even though his draft registration card indicates he claimed exemption from military service because he was “opposed to destruction of life.”

After the war, Voyzey was among left-leaning miners from across the nation who attended a conference in Pittsburgh in 1923. Their chief aim was to develop a strategy to oppose John L. Lewis in upcoming union elections and then take over what the rebellious miners called “the UMWA machine”. The meeting led to formation of the Progressive Miners’ International Committee of the UMWA (which should not be confused with the Progressive Mine Workers of America, a separate union formed in the 1930s).

Voyzey ran against Lewis in 1924 for the leadership of the UMWA. Although he lost by a substantial margin, Voyzey received a respectable 66,000 votes (Lewis had 136,000).

Two years later, Voyzey joined with other radicalized UMWA members to form what they called the Save the Union movement. During another round of UMWA elections in 1926, Save the Union backed John Brophy, president of the Central Pennsylvania UMWA, against Lewis. Brophy, following the Save the Union platform, advocated for nationalizing the U.S. coal industry. He also lost to Lewis.

In March 1928, Voyzey, Brophy, Joseph Angelo (Save the Union secretary from Springfield) and John J. Watt, one of their allies, organized a mass meeting at the Sangamon County Courthouse in an effort to appeal to local miners to leave the UMWA.  The meeting, attended by several hundred miners, was later relegated to an assembly hall at 11th and Kansas streets.

That April, a group of Save the Union advocates at Springfield’s Old West/Panther Creek No. 4 mine were attacked by 250 UMWA miners allied with Lewis. The melee, which took place after weeks of anti-UMWA picketing at the mine, was dubbed the “Save the Union Riot.” Two Save the Union picketers were hospitalized, while Voyzey and his wife had to be rescued by a cordon of Sangamon County sheriff’s deputies.

According to the book Fire in the Hole: Miners and Managers in the American Coal Industry, Save the Union lost the support of miners when the bituminous coal industry went bust in 1929-30, leaving 18 percent unemployment in the U.S. mining sector.

Save the Union was succeeded by the National Miners Union, which Communist organizers hoped would attract dissatisfied coal miners to their ideology. Voyzey was elected state president of the NMU, while Watt served as its national president.

Voyzey was a delegate to the 1929 Trade Union Educational League conference in Cleveland. Federal officials claimed the League also had ties to the CPUSA and the Communist International.

During the convention, Voyzey gave a speech charging the American Federation of Labor with corruption and attacking “John L. Lewis and his gang”.

Voyzey added that he didn’t intend “to be slapped and not slap back.”

“And brother,” he said, “I’ll slap back. As the bosses line up their sluggers, then we will meet them with sluggers.” 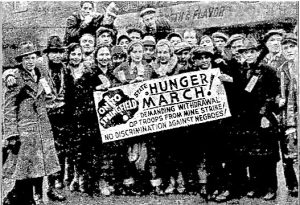 In April 1933, Voyzey helped organize a planned “hunger march” that leaders expected to bring as many as 15,000 people from across Illinois to the Statehouse. In response, police sealed off major highways leading into Sangamon County and arrested the march’s leaders. Springfield Police Chief Carl Nuess arrested Voyzey, for no apparent reason, in Reservoir Park.

The National Miners Union folded in 1933 after other radicals said it had failed to organize miners, especially younger members and African-American workers.

Voyzey apparently mellowed as he grew older. By 1936, he had reconciled with the American Federation of Labor and served as its local representative.  In 1944, he was listed in local newspaper reports as belonging to Laborers’ International Union Local 159 in Decatur. He and his family later moved to Denver, Colo., where Voyzey became the AFL’s Colorado representative.

Voyzey died in Denver in November 1950. He is buried at Oak Ridge Cemetery in Springfield.