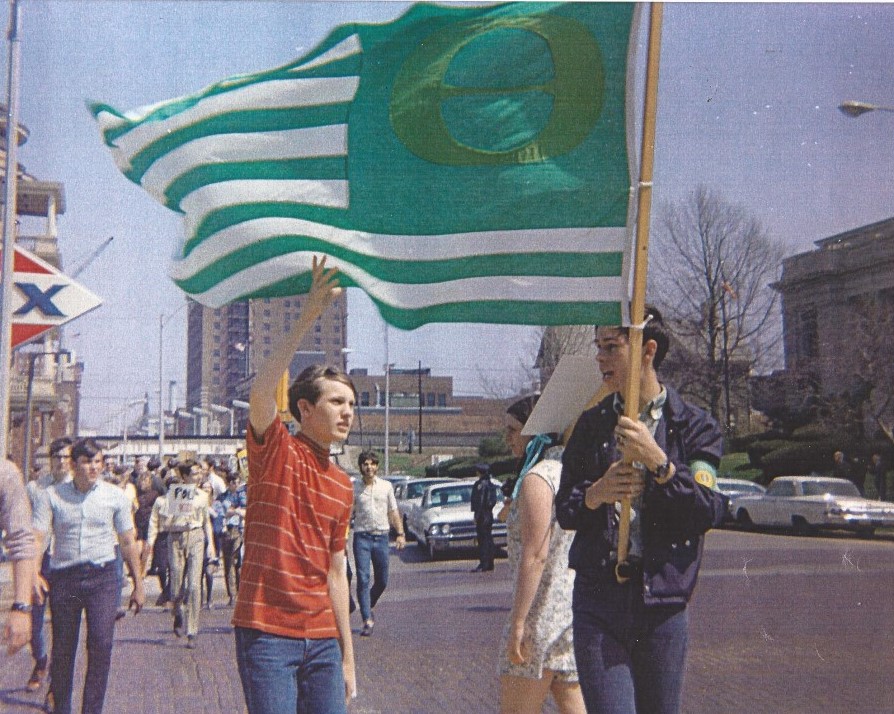 A homemade flag Lanphier High School students carried to the Statehouse in 1970 as a symbol of the environmental movement found a permanent home in the Smithsonian Institution. But a mystery remains: who sewed the flag?

Smithsonian Magazine revived the story of the Lanphier flag in April 2020 as part of the publication’s commemoration of the 50th anniversary of Earth Day.

The flag got its start in the classroom of LHS science teacher Ray Bruzan, who, as Smithsonian reported, turned Room 308 into the school’s “Environmental Action Center” during the 1969-70 school year.

On the first Earth Day, April 22, 1970, dozens of Lanphier students marched behind the flag to the Statehouse, picking up litter as they went, to highlight the need for environmental reform. At the Capitol, they turned in petitions to Lt. Gov. Paul Simon (acting governor for the day) calling for action on environmental problems.

The flag, 61 by 36.5 inches, carries green stripes, a symbol of a clean earth; white stripes, symbolizing clean air; and the Greek letter theta, suggesting death. The design was based on one created by Ron Cobb, cartoonist for the Los Angeles Free Press.

Bruzan kept the flag in his classroom for the next two decades. As the 25th anniversary of that first Earth Day approached, however, he learned that the Smithsonian was looking for artifacts from the 1970 observance. Bruzan contacted the museum.

“I told them we did Earth Day in a big way here,” he told State Journal-Register reporter Mike Matulis in 1994. Museum officials were receptive. Lanphier’s flag became part of the Smithsonian’s 25th anniversary exhibit about Earth Day and remains in the Smithsonian’s permanent collection.

Bruzan had only one regret: The mother of one of his 1969-70 students had sewed the flag, but 200-some students had passed through his classroom 24 years earlier; by 1994, Bruzan no longer remembered who the seamstress was.

“I remember I was so thrilled to get the flag that I wrote a thank-you note to the parent, but I forget who it was,” Bruzan told Matulis. “I’d be thrilled to find out because I’d like to send that name into the Smithsonian with the flag.”

The woman never has been identified.

Bruzan and his wife Pam traveled to Washington, D.C., in 1995 to view the anniversary exhibit, including the Lanphier flag. Pam Bruzan, who was a reporter for the Illinois State Register in 1970, took several color snapshots of the students’ march that also were used in the Smithsonian display. One of those photos (above) was used in Smithsonian Magazine’s online article about the 50th anniversary in 2020.

Bruzan retired from the Springfield School District following the 2000-01 school year. Among other honors during his 42-year school career, Bruzan was named the district’s Educator of the Year in 1990, Illinois’ Environmental Teacher of the Year in 1975, and an Outstanding Teacher by the Rose-Hulman Institute of Technology in 1988-89.

In retirement, Ray and Pam Bruzan have focused on the history of Rochester, Illinois, their home. Among their publications have been Cotton, Violins and Shots in the Night (2015), two updates of the 1918 Orange Judd Farmer Pictorial Community Album of Rochester Township and Village, and a series of Rochester-related children’s books: The Ghost Train of Lost Bridge Trail, The Ghost Trolley of Rockychester, and The Violinist of Rockychester.

This entry was posted in Education, Schools and school districts, Science. Bookmark the permalink.