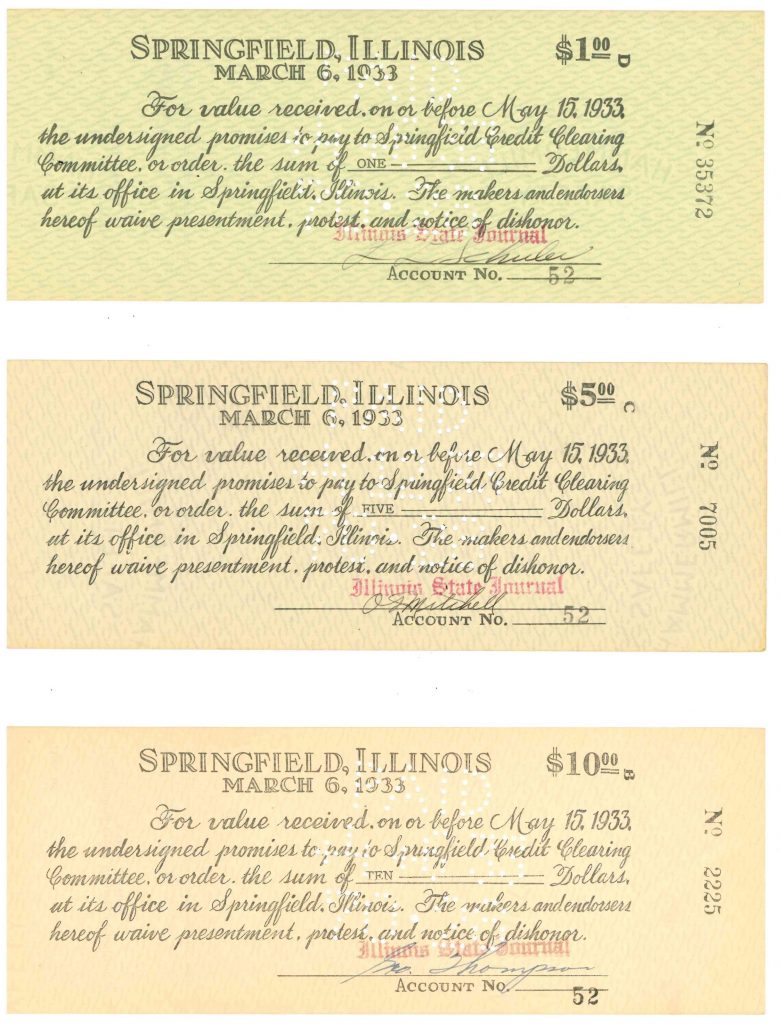 Springfield kept its economy going during the “bank holiday” of 1933 by printing its own money.

State and federal officials ordered banks across the nation to close in early March 1933, amid a wave of bank collapses caused by the Great Depression. The idea was to give banks time to reorganize, shore up their finances, and slow a wave of cash withdrawals by panicked savers and investors.

The holiday orders banned all banking operations. No loans could be approved or disbursed. Checks went uncashed. No one could make deposits or withdrawals. People couldn’t even get into their safe-deposit boxes.

The average citizen’s chief trouble appeared to lie in difficulty of cashing paychecks. Stores generally extended credit more liberally for household necessities, however, and larger places gave some cash in accepting checks for payment of bills or making of purchases.

Smaller merchants developed a fear that their small change supplies would run short and were cautious about accepting currency larger than $10 in denomination. The Chicago (transit) lines feared a shortage of pennies for its 7-cent fare business.

Springfield businesses set up a “money exchange,” where merchants and individuals could convert large-denomination bills into small change, in the shuttered Ridgely-Farmers State Bank building at Fifth and Monroe streets. That at least gave Journal editor J. Emil Smith an item for his daily column, “Making Conversation,” on March 6:

“The only bank in town that’s open is the one that’s closed,” wheezed a clean-shaven patron in a barber shop soon after the money exchange window had been opened.

But Springfield’s most important response to the crisis was to print “scrip,” IOUs that could be used like currency by both buyers and sellers. The system was directed by an ad-hoc Clearing Credit Committee made up of government officials, businesspeople and community leaders. The Journal explained the concept in an editorial March 6.

(Scrip) will quicken business, enable employers to meet their payrolls and provide wage earners with certificates of credit to be honored by merchants. With proper co-operation, the plan will enable normal business to continue as usual. 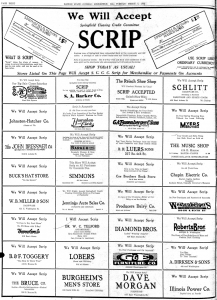 Businesses applied to the Clearing Committee to issue scrip. The committee decided how much an individual business was authorized to issue, a decision that depended on the business’s credit rating. City government also paid employees in scrip and accepted the new “money” from people paying their taxes and utility bills.

The committee printed scrip “bills” in $1, $5 and $10 denominations; each denomination was a different color.

Merchants enthusiastically accepted scrip in payment for purchases, probably understanding they might make few sales if they didn’t. A March 7 newspaper ad identified 32 participating businesses, one of which was the optometrist office of William C. Telford, who later became mayor of Springfield. Ultimately, 75 companies issued scrip, and many others accepted scrip for purchases.

The bank holiday was brief for Springfield Marine Bank and Illinois National Bank. Both reopened their doors on March 15. The interconnections between First National and First State, however, were a problem. New banking rules enacted under FDR made it illegal for a national bank to share quarters and management with a state bank. As a result, First State’s banking operations were absorbed by First National, while First State kept only its trust services.

Both institutions finally reopened March 31, coinciding with a shopping boomlet that several merchants ascribed to growing consumer confidence due to the bank stabilization. Jack Hanrahan, partner in the Hanrahan and Clark clothing store, told the Journal:

We did an exceptional business yesterday; in fact, it was one of the greatest day’s business we have had in months. The reopening of the First National Bank seemed to instill in people the confidence necessary to create better business.

Other store owners said much the same thing, and the banks’ reopenings probably did boost sales somewhat. But the one-day buying spree probably owed more to the fact that Illinois’ first-ever sales tax was due to go into effect the next day, April 1.

(The statewide tax, 3 percent, was designed to help pay for unemployment relief. To soften the blow to consumers, the city of Springfield imposed its own “bracket” sales tax system, under which people making purchases of less than $1 paid less in tax – as low as zero if a purchase amounted to a nickel or less. Merchants made up the difference owed to the state.)

The scrip system, however, had accomplished its purpose.

The 75 participating firms issued more than $200,000 worth of scrip during the bank holiday. The scrip  originally was scheduled to expire May 15, but the vast majority of companies that issued scrip paid it off by April 28. The last two firms paid their scrip debts in early May, the Journal reported. The newpaper added:

About $1,000 worth of scrip, it is believed, will be kept by souvenir collectors. There was no counterfeit scrip circulated in the city, and officials and merchants in closing their scrip accounts declared themselves heartily in favor of the plan as it worked out in this city.