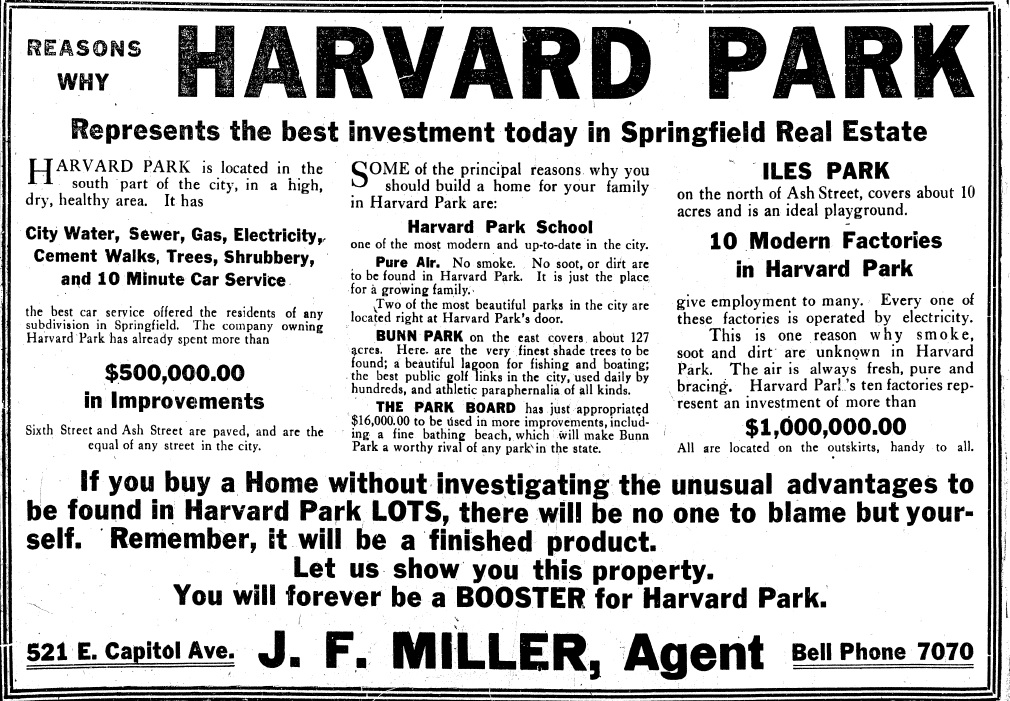 The person who named Harvard Park, one of Springfield’s largest early subdivisions, won $100 in a contest sponsored by the Springfield Improvement Association. He or she – the winner, one of 570 entrants, asked to remain anonymous – promptly donated the prize to two local orphanages, the Home for the Friendless and the Episcopalian-operated Orphanage of the Holy Child.

The winner’s legacy lives on, and not only in the subdivision name. As the Illinois State Journal reported when the winning name was announced in April 1906:

To carry out the college name scheme, the owners of the addition have decided to call the main boulevard that will extend through the tract Yale boulevard. The four principal streets will be called Monticello, Cornell, Princeton and Wellesley avenues.

Where “Monticello” came from wasn’t explained, but the rest of Harvard Park’s streets, including an east-west boulevard, Bryn Mawr, also bear the names of top Eastern colleges.

Harvard Park officially dates itself from 1908, when its first section was annexed to the city of Springfield. However, lots went on sale two years earlier, following a protracted Springfield City Council debate over the Springfield Consolidated Railway company’s rights to extend its street car routes to the area. 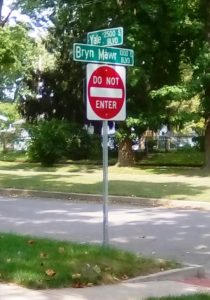 Developers explicitly designed the area to accommodate both homes and factories. Industries, from a brush manufacturer to a farm implement factory, were built on the edges of the residential area, which eventually grew to take in about 300 acres and 850 homes. The neighborhood’s boundaries are from Sixth to 11th streets and Ash Street to Stanford Avenue, although Harvard Park’s earliest marketing also boasted of its proximity to Bunn Park, across 11th Street from the subdivision.

Those early ads also emphasize that Harvard Park was “carefully restricted.” Exactly what those restrictions were was not described, although other subdivisions built about the same time were more candid. Capital Park (between North Grand Avenue and Washington street east of Wesley Street), for instance, was planned in 1909. Developers there said Capital Park restrictions included a “building limit – no shacks – a building line and no saloons.”

However, the “restricted” wording in Harvard Park ads also may have been code for the fact that lots originally were open only to whites. As Fever River Research noted in its 2018 report, National Register of Historic Places Thematic Survey of Springfield’s African-American Community, And the Central East Neighborhood, Springfield, Illinois:

(I)n an era of heightened Jim Crow policies, several factors were used by some of Springfield’s white developers and residents to keep the community’s more affluent neighborhoods segregated, and for whites only. One of these was the use of protective covenants. Such covenants were integrated into the sales contracts for such new developments as Harvard Park … and the deed restricted property from being sold to black residents, effectively preventing them from moving into the newly developed neighborhoods.

Some of the earliest industries in or near Harvard Park included Gibson Wagon Gear and the Harvard Brush Co. The Fred R. Coats Co., which made watch parts and other precision equipment, relocated from downtown Springfield to 11th and Ash streets in 1906 and then to 2220 Yale Blvd., in the heart of Harvard Park, in 1936. The Springfield Consolidated Railway Co., the city street car line, also moved its car barns to Harvard Park in 1908. 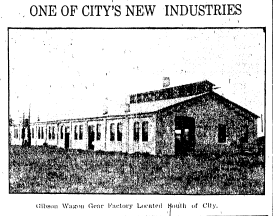 Fetzer outlined the city’s other attractions in an interview with the Illinois State Register.

Among the advantages which influence Mr. Fetzer to come to Springfield were:

First – The supply and cheapness of fuel.

Second – The richness of this agricultural section – the Corn Belt of which Springfield is the Brilliant buckle.

Third – Transportation advantages and ability to ship direct to the dealer.

The factory in Harvard park will be located on the belt line which the Chicago & Alton has given Mr. Fetzer assurances will be built in the very near future.

The building to be erected will be 560 feet long and constructed either of brick or concrete.

Fetzer became one of the neighborhood’s most prominent boosters. He was quoted in a 1909 newspaper advertisement:

I might properly say that our company has made a very great mistake if we didn’t find in HARVARD PARK the best factory location in America, and I haven’t believed yet that we have made any mistake in coming to SPRINGFIELD. (Capitalization in original.)

Residential Harvard Park was mostly developed before the Great Depression. The Harvard Park Dads Club, founded in the early 1940s, became the neighborhood’s best-known organization after World War II. The club, which, according to a 2008 Illinois Times article, had 500 members in 1950, supported itself with an annual minstrel show. 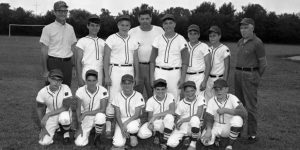 Its activities included sports programs, dances, holiday giveaways and a variety of community events, especially following construction of the group’s clubhouse at 2525 S. 12th St. – outside the traditional boundaries of Harvard Park – in 1950. (The Springfield Jaycees took over the building in 1982; they donated it to The Outlet, a mentoring program that originated in Jacksonville, in 2015.)

Harvard Park is a replica of growing up in a small town. It’s a neighborly community where we look out for our neighbors, yet there is privacy. There’s lots of camaraderie, and it is reasonable, safe, comfortable living.

Springfield was a manufacturing town in the first half of the 20th century, and many of the city’s best-known industries operated in the Harvard Park area. Allis-Chalmers/Fiatallis was the largest, of course, but a few of the others were:

This entry was posted in Communities, Industry. Bookmark the permalink.