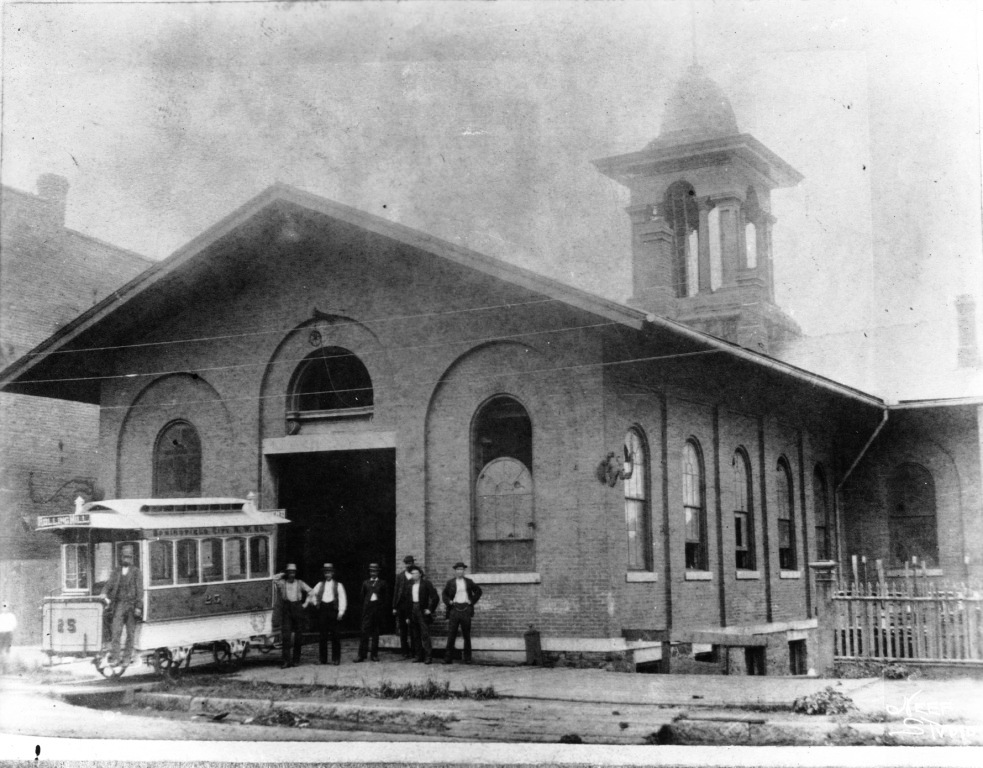 Springfield’s street car “war” of 1890 actually consisted of several months’ worth of legal and political maneuvering between two local street car operators, although a brief confrontation on Spring Street did leave the president of one of the companies with a bloody nose.

The real significance of the dispute was that it demonstrated that residents of the growing city were demanding better transportation — and were willing to take matters into their own hands if necessary.

Springfield had had horse- and mule-powered trolleys since the 1860s, but by 1893, electricity was the coming thing in street car service.

The immediate cause of the local controversy was the City Railway Company’s attempt to steal a beat on its competitor, the Citizens Railway, by extending service to the then-suburb of South Springfield — essentially, the area beyond South Grand Avenue.  City Railway’s trump card was that it had begun operating electric-powered streetcars two months earlier; Citizens Railway’s cars still were pulled by mules.

City Railway crews, in the dark of night Aug. 3, 1890, began to install ties and track along Spring Street north of Allen Street, preparatory to extending City Railway’s line to South Grand Avenue. The company’s plan was to encircle the city with its track by extending a line along South Grand from Spring to East Grand Avenue (18th Street).

That afternoon, Citizens Railway’s president, Henry Schuck, appeared on the scene with his own crew of employees, “who looked as though they would as lief fight as eat,” according to the Aug. 4 Daily Illinois State Journal. “They shoved a mule line car across the turn table on Second street onto the Allen Street extension, and pushed it up to the end of the line on Spring street. Then they went to work to lay a track around the corner and parallel with the electric track on Spring street.

“As soon as Schuck’s men commenced to work (City Railway’s Ed) Payne ordered his men into the field and the two forces almost immediately came in contact.”

Schuck’s nose was bloodied in a tussle over a four-foot-long “measuring gauge,” although everyone else involved denied striking him. “When the row was over the police interfered and Mr. Schuck withdrew his forces and left the field in the possession of the enemy,” the Journal said. “It was otherwise a bloodless battle between the two street railroad corporations, with all the honors in favor of the electric line.”

Schuck’s Citizens Railway contended the city had given it an exclusive right to lay rails on Spring Street, but City Railway countered that its state charter allowed it to run lines anywhere in Springfield.

Whatever the legal arguments, residents of South Springfield were clearly on the side of City and its more advanced propulsion technology — the newspapers often referred to City as simply “the electric railway.” City Railway had quickly raised $2,000 in subscriptions to finance its Spring Street extension, and area residents helped lay the rails. “Even women helped in the work, carrying spikes,” the Daily Register reported Aug. 5. And at night, residents patrolled the electric company’s line “to prevent any attempt at tearing it up should one be made by the opposition company.”

Although the legal back-and-forth continued, Citizens Railway conceded by the fall of 1890 that the time of mule-power trolleys had passed, and the company began preparations to convert to electric power.

In 1893, both companies were taken over by a Louisville, Ky., syndicate, and the Springfield Consolidated City Railway Co. was born. “This will put Springfield along with the best equipped cities for efficient street car service,” the Daily Illinois State Register said on April 7, 1893.

As the 20th century began, utility companies, eventually including Illinois Power and the Central Illinois Light Co., took over the street car system. Street cars continued to run in Springfield until the late 1930s, when they were replaced by buses.

More information: Springfield newspapers of 1890, available on microfilm at Lincoln Library. Helen Van Cleave Blankmeyer’s highly colored version of the incident is contained in her unpublished manuscript, The Story of City Records, available at Lincoln Library’s Sangamon Valley Collection and at the Abraham Lincoln Presidential Museum.