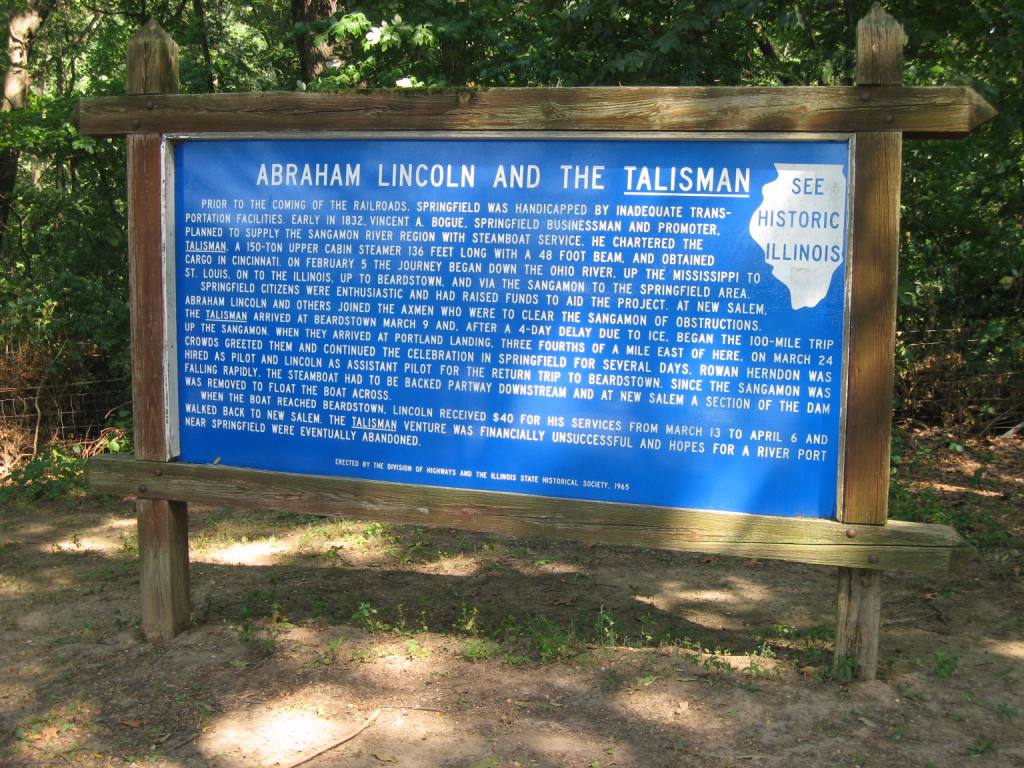 A historical marker at an Interstate 55 rest area east of Springfield remembers the Talisman’s voyage.

The Talisman, a “splendid upper cabin steamer,” left Cincinnati on Feb. 2, 1832, bound for Springfield via the Ohio, Mississippi, Illinois and — most importantly to central Illinoisans — the Sangamon rivers. The venture raised hopes that the Sangamon could be a practical shipping route between Sangamon County and bigger markets to the south and east.

John Carroll Power explained the problem in his History of the Early Settlers of Sangamon County, Illinois (1876).

To the first settlers of Illinois (transportation)  was of unusual importance, on account of the vast extent of undrained soil, so rich and soft as to be almost impassible, in its natural state, for half of every year. For the transportation of heavy articles long distances, no other mode was though of except by water. They could be conveyed three or four times the distance in that way, much cheaper than on a straight line by any known method.

The Talisman duly arrived at Portland Landing near Springfield in late March, prompting an outburst of optimism for the future of Sangamon River traffic.

“Springfield can no longer be considered an inland town,” the Sangamo Journal gushed on March 29. “… The result which must follow the successful termination of this enterprise to our county, and to those counties lying in its neighborhood, it would be impossible to calculate.”

The problem was that the Sangamon’s water level fell after the Talisman arrived. As a result, even after its cargo was unloaded, the Talisman — which was 136 feet long and had a beam of 48 feet — didn’t have enough room to turn around for the return trip. It had to steam backwards for much of the 100 miles downstream to Beardstown.  (Abraham Lincoln, then a resident of New Salem, was hired as assistant pilot for the return trip; he was paid $40 for his efforts.)

“The only mention ever made of her afterwards,” Power wrote of the steamboat, “was a newspaper report that the Talisman was burned at the wharf in St. Louis. … No attempt was ever made after that to bring a boat up the river.*

“Thus ended the dream of navigating the Sangamo (sic), across which a man may walk almost dry shod for nearly half of every year.”

The site of Portland Landing and the story of the Talisman’s attempt to open the Sangamon to shipping are the subjects of a historical marker at the Interstate 55 northbound rest area northeast of Springfield.  Portland Landing was three-quarters of a mile west of the rest area.

*Note: Despite Power’s statement, there apparently was one more attempt to bring large-scale freight traffic to the Sangamon. The steamboat Utility went upstream in 1836, but it got stuck at Petersburg and ultimately was dismantled. As it happened, work began two years later to build the Northern Cross Railroad between Springfield and the Illinois River. Once railroads reached Springfield– the first Northern Cross train arrived in 1842 — there no longer was any need to open the Sangamon to steamboats.