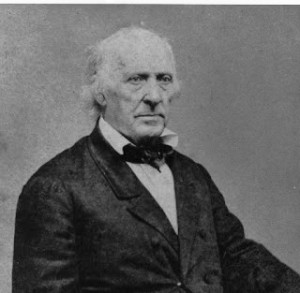 John Todd (1787-1865) was Mary Lincoln’s uncle and the de facto patriarch of the Springfield Todds. Born near Lexington, Ky., Todd received an excellent education, first becoming one of the earliest graduates of Transylvania University in Lexington, then graduating from the Medical University of Philadelphia. He served in the War of 1812 as Surgeon General of the Kentucky troops before returning to Lexington to practice medicine.

In 1827 John Quincy Adams appointed Todd register of the General Land Office in Springfield, Illinois. He held this position until 1829, when he was removed for political reasons following the election of Andrew Jackson. He practiced medicine in Springfield from then until his death at age 77.

Todd had a complicated relationship with slavery. In 1823-24 he campaigned vigorously against introducing slavery into Illinois, yet his household was served by an African-American indentured servant named Betsy. He believed in gradual emancipation and the colonization of freed slaves. When the Civil War broke out he staunchly supported the Union, despite his ties of friendship and family in slaveholding Kentucky.

Although he had a large and thriving medical practice, Todd never amassed much money. He was careless about collecting money from those who could pay for his services and generous about forgiving the bills of those who could not afford to pay. In the 1860 census he was listed as having $2,000 in real estate and only $500 in his personal estate. (Abraham Lincoln, by contrast, had $5,000 in real estate and $12,000 in his personal estate).

Todd was beloved by Mary Lincoln and her sisters. Indeed, Todd was the one who helped to smooth things over with the family when Mary announced with no warning that she intended to marry Abraham Lincoln. According to Katherine Helm’s The True Story of Mary, Wife of Lincoln (p. 94):

Mr. Lincoln meeting Mr. Ninian Edwards on the street told him that he and Mary had decided to be married quietly at Mr. Dresser’s house that evening.

Mr. Edwards, feeling responsible for Mary, exclaimed: “No, I am Mary’s guardian and if she is married at all it must be from my house.”

Mary was consulted, and after some discussion she and Mr. Lincoln agreed to Mr. Edwards’ wishes. It was a bright cool morning in November and Mary fairly flew to the home of her uncle, Dr. John Todd, who was much beloved by his nieces, being so calm and quiet and affable. “Uncle,’”she cried excitedly, “you must go and tell my sister that Mr. Lincoln and I are to be married this evening,” and turning to her cousin Elizabeth Todd, she asked her to put on her bonnet and go with her to make some purchases.

When they reached the Edwards home there was great excitement, coupled with no little indignation, that such news should have been announced so suddenly that there was not time to make formal and suitable preparations for a wedding. But Dr. Todd was a suave and diplomatic advocate for Mary’s cause and soon had them all in smiling good-humor.

Todd lived near Second and Washington streets in 1828, according to John Todd Stuart’s 1881 reminiscence. The site is No. 30 on the reconstructed map of 1828 Springfield.

Todd died at the age of 78 on Jan. 7, 1865, of congestion of the lungs. He was eulogized bythe Rev. John Bergen as a man known for his “expansive heart, calm temperament, and native grace of manners.” Elizabeth Todd followed him in death just two months later. They are both buried in Oak Ridge cemetery.

Copyright The People Lincoln Knew, a blog by Erika Holst. Reprinted by permission.

This entry was posted in Early residents, Prominent figures and tagged 1828 map. Bookmark the permalink.