Lincoln Library and World War I 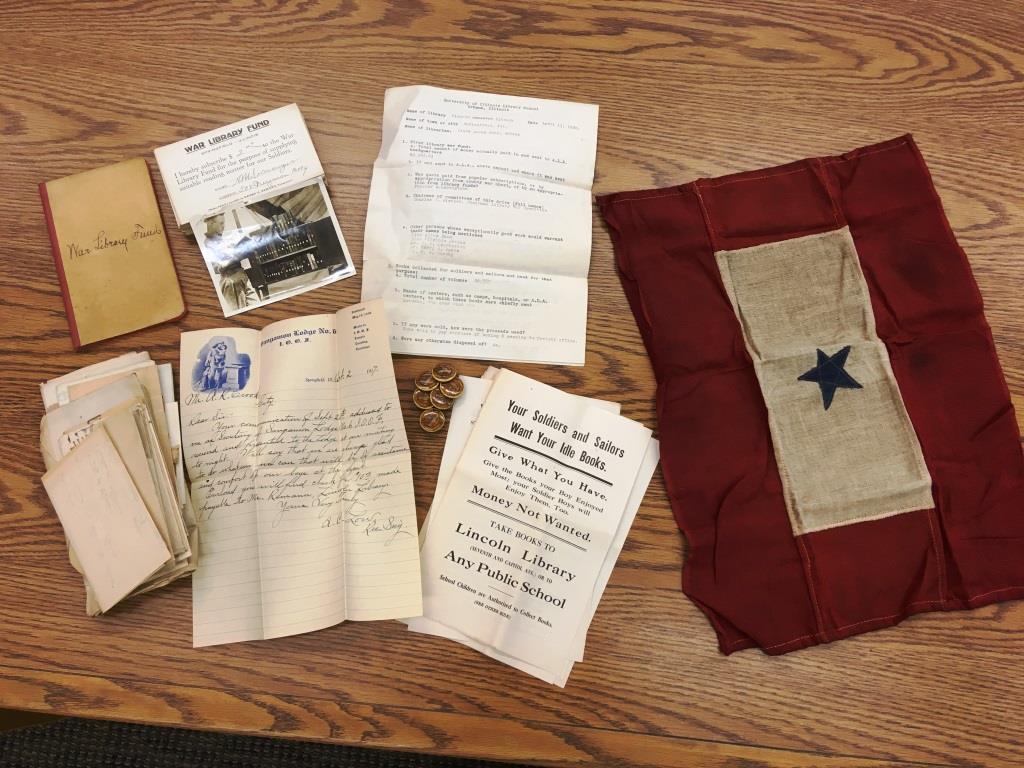 World War I doughboys wanted reading material – “good red-blooded fiction” and more – and they got it with the help of Springfield’s Lincoln Library.

But a small box stored for almost a century in the Sangamon Valley Collection, the library’s local history division, shows that Lincoln Library supported the home-front effort with more than books: the library  was a community center for many activities contributing to the war effort at home and abroad.

As the centennial approached of the 1918 armistice that ended the war, SVC librarian Stephanie Martin researched items in the box to study the extent of the library’s involvement with Springfield’s home front. Aside from donation cards, brochures, library reports and similar material, the box contained such memorabilia as buttons from a boys’ support organization and  even a Blue Star flag, which families hung in their windows to signify the residents had loved ones overseas.

About 4,000 Sangamon County residents served directly in the war, as soldier, sailor or nurse, and thousands more supported the war effort on the home front. When it came to books and magazines for the men and women headed “over there,” Lincoln Library was well positioned to help.

When the American Library Association called for a War Library fund drive, Lincoln Library raised more than $2,300. The money was spent on reading materials and library equipment used by soldiers and sailors in camps in 1917 and 1918. 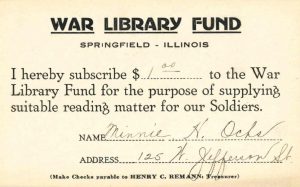 Charles Rieffler, library board secretary and chairman of the library’s war committee, said a few calls on wealthy men would have raised the funds easily. But he told the Illinois State Register that wasn’t fair to the people of Springfield.

The fathers and mothers and sisters and friends and sweethearts of these boys have a right to help in sending books to the men they know. … We are trying to provide good books to the good boys of America, the boys who are ready to sacrifice their lives for us. They are boys we know, many of them have marched away from this very town, and every man, woman and child in Springfield should join in sending them this message: “We are standing back of you, we are sending you books to read when you are at leisure, we want you to come back to us.”

The library also sponsored a book drive as part of the ALA’s War Service effort in March 1918. With the help of school children, Lincoln Library collected 26,000 leisure and educational books for camp libraries in Europe. More than 5,400 magazines were sent to Springfield’s two military encampments, Camp Lincoln on the city’s northwest side and Camp Dunne, which was at the Illinois State Fairgrounds. 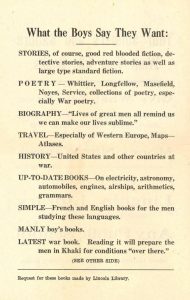 A flier described the kinds of books soldiers wanted to read. The back of the card explained how to donate a book.

As was the case with many other businesses and government offices, War Savings stamps were sold at the library and were advertised by posters made by the library staff.

The library was one of 43 auxiliaries in Springfield of the newly formed Sangamon County Chapter of the American Red Cross. The library provided a workroom for sewing, knitting, distributing yarn, and receiving items made at home. In November 1918, volunteers knitted 236 socks and 40 sweaters for soldiers and sailors. Eighty percent of the library staff gave personal service in the Red Cross room.

Ten army officers gave talks on modern warfare, and the library saw a 55 percent increase in circulation of war books.

The library made war garden posters, compiled lists of books on gardening, and worked with local garden clubs. Staff members created food conservation displays at the state fair and the high school, and books and papers on food conservation were arrayed at the library.

Lists of books on patriotism and citizenship were provided for school use. Library employees also prepared book lists and poster displays for the Boys’ Working Reserve – an organization of boys aged 16 to 20 who were trained on local farms in case of a farm worker shortage. – and librarians gave talks to the group.

War work was another focus — the library had a display of materials about war work and distributed 2,182 pamphlets on the subject.

Classes on the English language and American citizenship were held at the library, as were classes called “Gift of the Nations,” which focused on studying “the various peoples who have come to America, to learn something of their native countries, or background and history.”

When World War I ended on Nov. 11, 1918, Lincoln Library could take pride in its contribution to the United States’ role in the war.

This entry was posted in Local government, Military. Bookmark the permalink.