Angus Littlejohn, once a pillar of Springfield’s business community, spent three years in the 1930s trying to recoup his reputation and keep himself out of prison. He failed.

On the morning of July 2, 1938, five minutes before he was supposed to surrender to the U.S. marshal’s office, Littlejohn stepped into the rock garden behind his home on Woodland Avenue and shot himself in the head.

Littlejohn, usually known as “A.C.,” was born in Texas in 1888 and moved to Springfield in 1918. Over the next 20 years, he seemingly became wealthy by founding a network of insurance companies, starting with one that insured hogs. (“We Have Nothing Against The Veterinarian,” ads for the State Mutual Hog Insurance Co. proclaimed. … “And Still The Losses Occur.”)

The Littlejohn family “moved in a select social circle,” the Illinois State Journal reported in its story on his suicide. Littlejohn and especially his wife, Regina, had leading roles with the Orendorff Place Improvement Association, the Elks Club, the Girl Scouts, and the Sangamo Club. The Journal in 1932 described the Littlejohns’ rock garden, where A.C. Littlejohn killed himself, as “one of the beauty spots in Springfield.” Their children won horse riding championships and starred in local musicales.

When a group of Springfield women toured Europe in 1932, organizer Mrs. C.E. Jenks wrote the Journal, “Mrs. A.C. Littlejohn of Springfield is with me and through her we all had an audience with the pope.”

Federal prosecutors, however, said the family’s lifestyle was underwritten by insurance fraud. 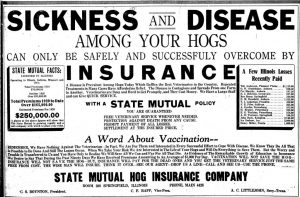 Littlejohn got his start in central Illinois by insuring hogs. (Courtesy SJ-R)

A grand jury indicted Littlejohn and three associates, all officers of Littlejohn’s main company, the National Aid Society, for mail fraud. The indictment accused the four – another of whom was Henson C. Robinson (1901-64), then president of the Springfield Park Board – of selling insurance policies, mainly to the elderly, without explaining that the policies’ limitations made benefits almost impossible to obtain. Meanwhile, the officers, especially Littlejohn, took huge payouts for themselves, according to the indictment.

At one point, 130,000 people held memberships in the National Aid Society, the indictment said. While the company was based in Springfield, where its 50 employees took up a half-floor of the Myers Building, policies were mainly sold in Indiana and Colorado. As the Journal reported the government’s allegations:

The membership … is made up for the most part of old persons, some almost 80 years old, with the average age being near the 70-year-old mark.

Postal authorities … stated that the society had special appeal for elderly persons because a membership could be secured without the necessity of taking a physical examination. …

The indictment sets forth that the original charters characterized the National Aid society as a non-for-profit organization, but that the officers of the company set aside “huge sums” for themselves as salaries, bonuses, fees and expenses.

Literature of the National Aid society stated that protection never cost more than $12 a year. … The highest policy was $3,000.

National Aid wasn’t a conventional insurance company, but a mutual aid group, under its charter. Members were charged $6 to join and then $1 more, potentially up to 16 times a year, when another member died. Supposedly, the receipts were used to pay members’ beneficiaries.

However, when the four accused went on trial in February 1937, prosecutors said they calculated that National Aid had taken $1.25 million from members, but more than $800,000 of that was used for expenses, including officer salaries. Chief prosecutor Marks Alexander described Littlejohn as the company’s “chief beneficiary;” government figures showed Littlejohn was paid more than $220,000 from National Aid between 1931 and 1934.

Members and their beneficiaries, by contrast, seldom received the compensation they expected, he said.

Alexander alleged the society required no physical examination of prospects, made its offer attractive to old people who ordinarily could not get insurance protection, couched its certificates in uncertain and ambiguous grammar, and that its bylaws were so worded (that) beneficiaries could not get compensation if policyholders died … from a number of natural causes which develop over a long period of time. …

More than 200 witnesses testified during the six-week trial. At the end, Judge J. Earl Major threw out charges against two of the defendants, but the jury convicted Littlejohn and Robinson. 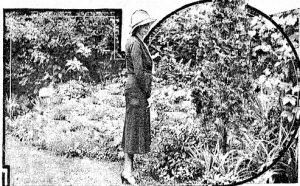 Major sentenced Littlejohn to eight years in prison and a $1,200 fine; he also faced tax liens totaling $100,000. Robinson, considered less culpable, received a two-year sentence, which Major later reduced to probation (Robinson didn’t run for re-election to the park board following his conviction).

Littlejohn’s appeals were rejected. His last hope of avoiding prison was at his own probation hearing, held before Major on July 1, 1938. Fourteen witnesses – including such prominent local business figures as Louis Myers (of Myers Brothers) and G.E. Weaver (Weaver Manufacturing) – endorsed probation for Littlejohn. They all followed a similar script, the Journal reported.

The group, with slight and almost monotonous variations, testified Littlejohn should be given another chance, that he will become an exemplary citizen if placed on probation, that … Littlejohn never “did anything willfully wrong;” and that his indictment and conviction have been sufficient punishment for his crime, a permanent stigma, as it were.

Littlejohn testified that he had quit the insurance business and if granted probation, would become a salesman, “in something profitable.”

But prosecutors pointed out that Littlejohn had never offered to pay his $1,200 fine or any restitution. What’s more, they noted, after his conviction, Littlewood transferred his home and other property to his wife.

“How can the government stop gross frauds against the poor and the uninformed unless the men convicted of doing it are punished?” Alexander asked one of Littlejohn’s character witnesses.

Major agreed. He denied probation and ordered Littlejohn to report for transportation to prison the next morning.

Family members told the Journal Littlejohn sat up all night brooding. Then, about 9:55 a.m.,

Without coat or hat, Littlejohn stepped from a rear sun parlor, went a few paces in a driving summer rainstorm, placed the weapon at a point behind his right ear and pulled the trigger. … Death was instantaneous.

This entry was posted in Business, Crime and vice, Law enforcement, Prominent figures. Bookmark the permalink.