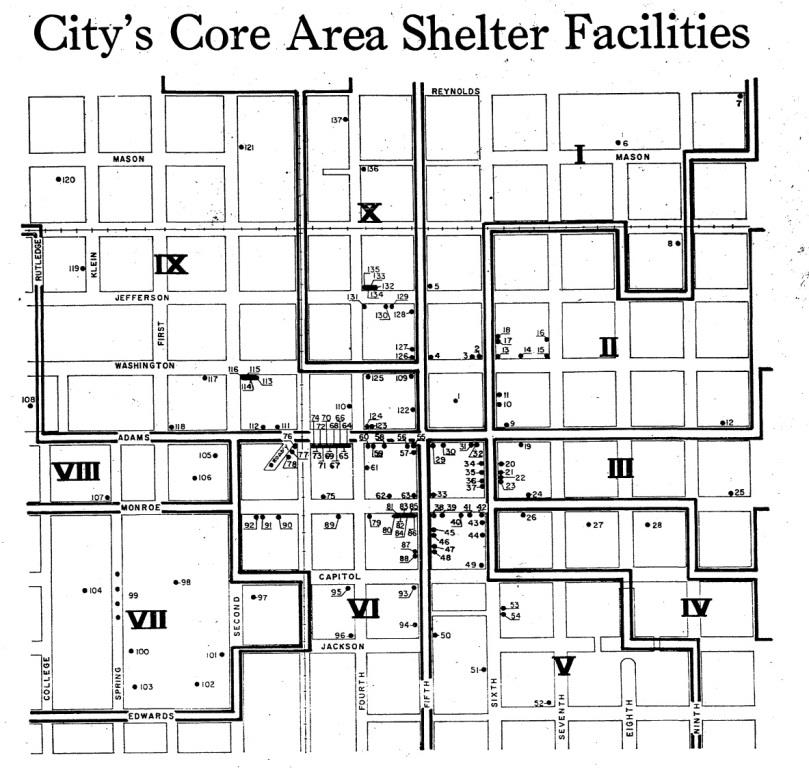 The Illinois State Journal listed all approved fallout shelters in Sangamon County on Oct. 31, 1965. This section shows shelters in the heart of Springfield. (Courtesy State Journal-Register)

On April 5, 1964, about 150 people moved into the sleek, white-tiled tunnels below the State Office Building. They were to remain there for 25 hours, drinking purified water and munching biscuits, while loudspeakers blared warnings and audio recordings simulated the unthinkable – a nuclear attack. 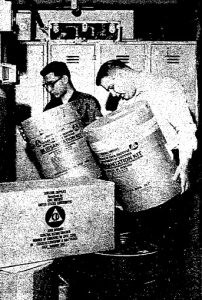 The exercise, of course, was a large-scale drill, something that sounds extreme today. Yet for those who grew up during the early stages of the Cold War, a Civil Defense drill of the magnitude undertaken in Springfield in 1964 wasn’t out of the ordinary. Similar exercises were performed across the nation.

sOne of the coordinators of the Springfield drill was Vernon Strongman (1912-76), a former shoe repairman who had been named coordinator of local civil defense programs in 1957. Some of the air raid sirens installed under Strongman’s directorship during the 1960s continued to alert people of tornados into the 2000s. In fact, severe weather – especially two tornadoes that hit Springfield in June 1957 – was one of the reasons Sangamon County bolstered its Civil Defense system in the early 1960s.

Nuclear bomb shelters, both public and private, were once located throughout Springfield and Sangamon County. A 1965 survey revealed 196 public shelter locations in Springfield alone. 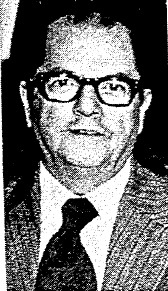 The largest could hold 7,000 residents at City Water, Light and Power, while, downtown, the Franklin Life Insurance building would have accommodated another 7,000.

Other public shelters were in the Sangamon County Building, the post office, the State House Inn, the Myers Brothers store, and inside several public schools. The smallest public shelter – capacity five people – was inside the Mode O’Day clothing store on East Adams Street.

Meanwhile, a number of people built private shelters in backyards or converted basements. One cost-conscious Cold War shelter manufacturer sold a model made from the wood of a Douglas fir tree. It was positioned in the family backyard, much like an outhouse.

For the 1961 Illinois State Fair, the Barker-Lubin Co. erected a demonstration shelter near the Poultry Building. The Illinois State Journal reported the fair display attracted “soaring interest compared to other years.”

“They’re not just looking at them now,” Strongman commented. “They are actually building them.” 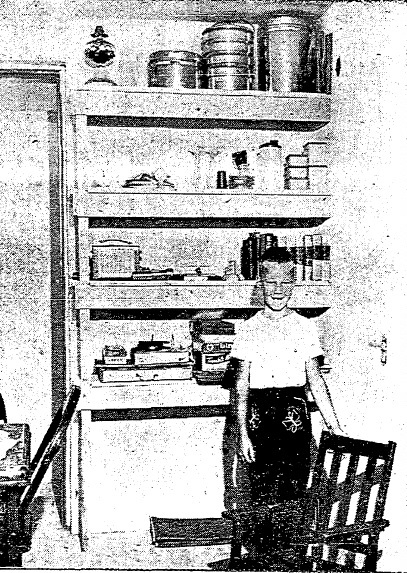 Discussion of how the Springfield area should prepare for the possibility of nuclear war had begun a decade earlier.

Following two nuclear tests by the Soviet Union in the fall of 1951, the Springfield City Council debated whether to include a large public shelter inside the parking garage slated for construction at Seventh and Monroe Streets. The cost must have proved too much, as there is no follow-up to the idea in local newspaper archives.

Springfield businesspeople had their own shelter ideas. In November 1951, Abe Roberts, manager of Roberts Brothers men’s clothing store, suggested the city create underground parking below what was then the Sangamon County Courthouse (now the Old Capitol) and design a shelter there to accommodate 10,000 people.

The cost, he said, “could be borne by business property owners in the area … The parking lot would pay for itself over a period of 20 years.” While a two-level underground garage was built when the Old Capitol was reconstructed in the 1960s, it didn’t include a bomb shelter.

On the state level, the Illinois General Assembly created the Illinois Civil Defense Agency in 1951 to provide assistance in the event of a nuclear attack and to give training and information about survival plans. The Illinois Emergency Services and Disaster Agency replaced the ICDA in 1975.

Most shelters built in the 1950s and ‘60s were in existing buildings reinforced to provide radiation protection. One example is the Emmerson Building at the Illinois State Fairgrounds. Built in the 1930s, its basement was reconfigured in the early 1960s and was approved as a nuclear shelter site. 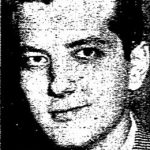 In the autumn of 1960, Lee Cernich of Springfield was serving as deputy civil defense director for Springfield and Sangamon County. When Springfield was named one of 23 state capitals to participate in a government shelter survey, Cernich was appointed to direct the survey.

Cernich and his team examined structures to define protection levels and determine the number of people each shelter could hold. Phase one lasted until 1964 and was for identification and observation. Phase two, from 1963 to 1968, studied structural assessment and supply issues, like whether a shelter had fresh drinking water, proper ventilation, and sufficient sewer capacity.

Larger shelters got sanitation kits – cardboard tubs 18 inches round, each with a plastic toilet seat and a bag for disposal of human waste. Some of the tubs originally held water; after the water was consumed, they were to be used as toilets.

The federal supplies also included first-aid kits and non-perishable sundries packaged for people to survive underground for a limited time– 48 hours was considered the standard during the 1960s.

Curtis Caldwell, Illinois facility survey engineer from 1988 to 1992, explained in an interview how the National Facility Survey was conducted and how it changed from the early 1960s to the early 1990s. 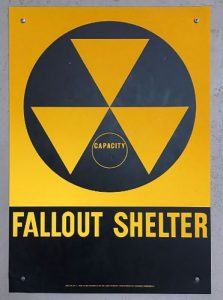 The triangles-within-a-circle were the universal designation for a fallout shelter. (Wikipedia)

A shelter’s ability to protect its occupants was based on its “protection factor,” which was calculated by comparing the radiation dose a person would receive inside the shelter versus a dose received outside the shelter. The protection factor, in turn, was affected by the type and thickness of building materials, the geometry of the shelter and its distance from the radioactive fallout outside. Some surveyors even used Hewlett-Packard calculators pre-programmed with protection factor modules.

In Springfield, the State Office Building (now the Stratton Building) stored emergency rations in tunnels connecting it to the State Capitol. The tunnels were licensed as a secure fallout shelter in the 1960s and marked with yellow and black fallout shelter signs. At the time, Strongman reported the building would “play a major role … in case Russian bombs or missiles should fall on Illinois.”

The State Office Building could hold 2,000 people inside its shelter.

“(T)he Springfield urbanized area is undoubtedly a secondary target,” Strongman told reporters in the mid-1960s. “(It is) the sole concentration of population outside Chicago and St. Louis.” 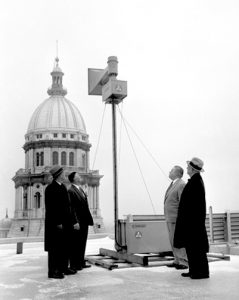 A combination of factors undoubtedly led to the large-scale drill in the office building in 1964. That same year, Illinois also began testing air raid sirens on the first Tuesday of each month.

Supplies in shelters weren’t meant to last indefinitely. When the shelters were built, it was believed that in the aftermath of a nuclear attack, retail sales would be frozen for five days and then rationing would begin. Although the government supplied goods in plentiful quantities, the fact remained that a 20-megaton nuclear warhead would have wiped out Sangamon County, and people within 35 to 40 miles of the blast would have been exposed to fatal burns.

The government did not explain who would be around to stop or restart retail sales or how people would come back to work after those five highly radioactive days had passed. Nonetheless, Illinois received a federal award for training one million people in general medical assistance – everything from delivering babies to treating radiation burns.

Could Sangamon County’s citizens have survived the nuclear fallout after an attack?  Curtis Caldwell says high-risk areas in the state were defined using a federally mandated document called the Nuclear Attack Planning Base.

Shelters identified in low-risk areas were meant to shelter people evacuated from high-risk areas as well as residents of the low-risk areas. The premise was that there would be up to two weeks of international tension before an attack, giving people time to move out of the higher-risk areas. Once theoretically safe in shelters, if radioactive fallout was detected, citizens would remain inside for 1-2 weeks allowing time for the fallout to decay.

To keep communication open during an emergency, special radio stations would broadcast over large areas of the country. The stations were required to have broadcast booths in low-risk areas along with auxiliary power and water supplies. WLS in Chicago was the station for Sangamon County and vicinity, Caldwell said. As the fallout shelter analyst for Illinois, Caldwell personally certified that WLS’s broadcast booth had a protection factor of at least 100.

The U.S. government had a plan for shepherding the public into designated refuges, but, in the end, the plan seemed hopeless, even to some of those working in government. In 1971, Civil Defense Agency administrator Col. Robert Ritz remarked to the press, “the best military estimate is that there would be but 15 minutes from the time the take-off of a missile was detected until it hit the target.”  That timetable meant an evacuation of downtown Springfield alone would have been impossible.

In 1970, the Nixon administration cut the national civil defense budget to $70 million. As a result, local Civil Defense programs were cut back, and in Illinois, there was a change in approach. Val Oshel, director of the Illinois Office of Emergency Preparedness during the early 1970s, said his agency was “building Civil Defense on natural disaster preparedness; anything we get on the nuclear side of it is a bonus.”

In 1971, Illinois had 9,286 licensed shelters designed to protect more than 11 million citizens. Almost 5,000 of the shelters were stocked with supplies, such as drinking water, first aid kits, and hoards of 31-pound biscuit tins—all deemed essential to nuclear survival. 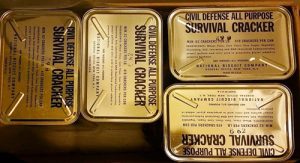 By the late 1970s, however, supplies inside most of the shelters were aging, and the biscuits were deemed unfit for consumption by Illinois authorities. A 1976 State Journal-Register story reported the federal government had no interest in helping Illinois dispose of the biscuits, and the state was left with a bunch of stale crackers.

Some local officials went as far as to eat (and reject eating) the old wafers in front of the press to demonstrate their inedibility. Caldwell said the biscuits “usually went rancid and had to be thrown away”.

By the mid-1980s, the Federal Emergency Management Agency began to hand off shelter survey work to individual states. Facility survey engineers like Caldwell managed data collection and analysis for their respective states. When the survey program came to an end in fall 1992, the shelter inventory for Illinois toped out at a voluminous 58,000 records on shelters throughout the state.

Even though the number of shelters increased, the threat of nuclear war rapidly decreased in the early 1990s. Officials then turned to natural and manmade disasters as their focus. The Illinois Emergency Services and Disaster Agency partnered with the Illinois Department of Nuclear Safety to protect residents from nuclear power accidents, a menace far more probable than missiles raining down upon the Capitol dome.

By 1992, the Cold War was relegated to the history books. With it went the nuclear fallout shelter, an underground symbol of a generation told to “duck and cover.”

Shelter supplies were tossed out, and the yellow and black shelter signs in corridors and basements were taken down, becoming the possessions of antique hunters and political history museums around the world.