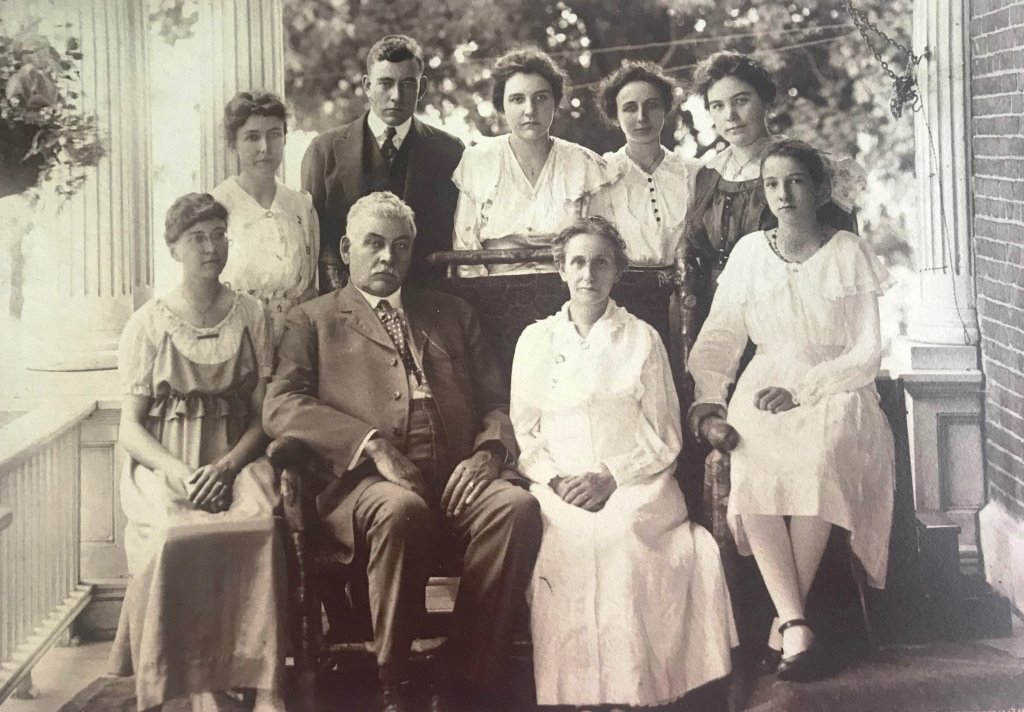 My grandparents on my mother’s side, Charles and Amy Reed, were superintendent and matron of the Sangamon County Poor Farm from 1915 to 1927. They had eight children, and my mother was the youngest. They moved into the poor farm when my mother was about 10 years old. The family was very close. The Reeds were devout members of the Methodist church, and family devotions were a daily part of their life.

My cousin, who remembers playing at the poor farm, wrote in his genealogy book that, although few people would be excited to visit the poor farm to see their relatives, that was not the case with the Reeds and Van Dorens. (My grandmother’s maiden name was Van Doren.) Anyway, all the family loved to come to the poor farm and spend the day together.

He said the superintendent’s quarters were spacious and there seemed to be endless number of bedrooms on the third floor. Four of Grandpa and Grandma’s daughters were married at the poor farm. My mother was one of those. Some of the grandchildren were born there as well.

My cousin wrote that it was an ideal place for family gatherings, and rarely a Sunday went by without visitors. The grandchildren still remember their agony in having to wait for the third table before being served, since children had no priority then.

They still loved going to the poor farm, however, as there were always plenty of playmates and such interesting things such as laundry carts and 10-foot-long washing machines to play in. The open stairway from first to third floor made a good place to play “elevator.” The older boys rigged up a pulley device, using a wheelchair, which they rolled down the third-floor hall, raising and lowering a bucket filled with odds and ends to the smaller children on the first floor.

Grandpa Reed encouraged his grandchildren to have fun, because he had always enjoyed playing with his own children. Nearly all of their toys were homemade and the entertainment was innovative.

My cousin recalls Grandpa would make silhouettes on the wall with his hands in front of a lantern. Grandma made a little puppet to put on his hand. Covering himself with a sheet, he put on a marionette show, which neighborhood children and even the adults liked to watch. But when he was through playing and said, “That’s enough,’ no one questioned him.

Though he didn’t have much money, he did take the children to the circus and to the state fair. After he became superintendent, he was able to get seats for the children in the windows of the courthouse (now the restored Old Capitol State Historic Site), so the children could watch the evening performances on the square. (Ed: See SangamonLink’s entry on the Illinois State Fair for more about the downtown entertainment held during state fairs in the late 19th and early 20th centuries.) He had season tickets at the fair and bought box seats for the races.

I am sorry I never got to meet my grandparents and I have enjoyed looking through my mother’s boxes of memorabilia. We grew up hearing many stories about the poor farm, and, of course, old “Pigeon” (Ed: Columbus Wilson, who spent more than 50 years as a resident of the farm) as the one we liked to hear about the most.

Contributed by Elaine Burrus. Our thanks to her.

This entry was posted in Children, Family life, Sangamon County. Bookmark the permalink.

3 Responses to Family life at the Sangamon County Poor Farm