Two Mile House was an 1840s inn that became Sangamon County’s first poorhouse. It also was the scene in 1849 of a possum hunt that went wrong.

Two Mile House got its name because it was about two miles from the center of then-tiny Springfield. Today, the site is in the northeast corner of the Illinois State Fairgrounds.

Newspaper advertisements in 1849 and 1850 reported that William H. Marsh had taken over management of “the Public House formerly occupied by Capt. Jonathan Saunders, two miles north of Springfield, on the Peoria Road, known as the Two Mile House, where he will be glad to accommodate all the old customers … The fare will be as good as the best, and charges moderate.”

In November 1849, an anonymous, but poetic, writer for the Illinois Daily Journal (later the Illinois State Journal) wrote about a group of locals who decided to use the Two Mile House as their base for a nightlong hunt for raccoons and opossums.

Fine Sporting.—A few nights since, when the copper-moon was diffusing itself through a thin smoky mist, giving to the horizon and to the landscape an undefinable and unusual mellow beauty, several gentlemen of our city repaired a few miles into the country for the purpose of enjoying some sport in catching coons and possums. … The dogs, too, were announced as in excellent plight.

The group arranged for a post-hunt supper at Two Mile House.

(A)nd away went these Nimrods intent on “lots of fun” in the slaughter of innocent coons and possums. Hills, hollows, woods and creeks, were searched in vain – much to the damage of boots, pantaloons and physical strength – when, of a sudden, a voice was heard “breaking on the stillness of the night” “Turkies!” “Turkies!” – this way, b’hoys!” …

When the hunters reached the spot, however, instead of the dogs harrying a raccoon or opossum, they were battling a “polecat” – an unhappy skunk. The entire group, the reporter wrote, caught “a few drops fresh from the fountain.”

“The excellent supper furnished by the host of the ‘Two Mile House’ fully compensated the company for the disaster,” the story concluded.

Sangamon County bought the Two Mile House property, including 115 acres of land,  for $3,000 in 1851 in order to create the county’s first “almshouse.” William Marsh, the former innkeeper, was hired to manage the new poorhouse.

The soil is generally good, and the land all sufficient for the purposes of the purchase. The house is large enough to accommodate, at present, all who will be likely to be sent there from the county …

We are glad that there has thus been made a beginning in getting up an alms establishment, which can be improved and enlarged upon as the wants of the county shall require.

The Sangamon County Poor Farm was relocated to property east of Buffalo. The farm operated until 1944. 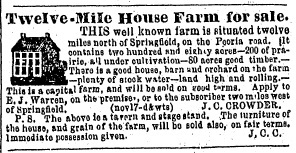 Two Mile House was one of three landmark inns north of Springfield in the 19th century. All originally were havens for travelers between Springfield and points north.

The Carpenter family operated an inn and stagecoach stop, variously known as Six Mile House or Seven Mile House, on part of the family’s property near the Sangamon River along Peoria Road. 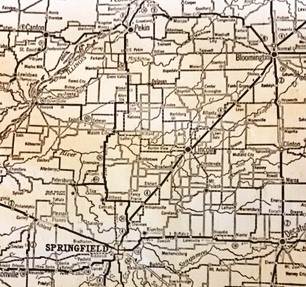 Detail from the 1927 Illinois road map shows the new highway from Bloomington to Springfield. (SCHS)

Twelve Mile House, west of Williamsville near the Menard County line, became part of the lore of Route 66 and today’s Interstate 55. When the state of Illinois decided to construct a new road from Springfield to Bloomington in 1921, here’s the route the state announced:

The road will run north from Springfield out on the Peoria road until one mile (word missing – apparently should have been “south”) of what is known as the “Twelve Mile House,” when it will turn east and run to Williamsville.

Both Route 66 and Interstate 55 ended up following the same general path.

More here on the history of Twelve Mile House.

This entry was posted in Hotels & taverns, Maps, Transportation. Bookmark the permalink.