The Helmle family, architects and builders 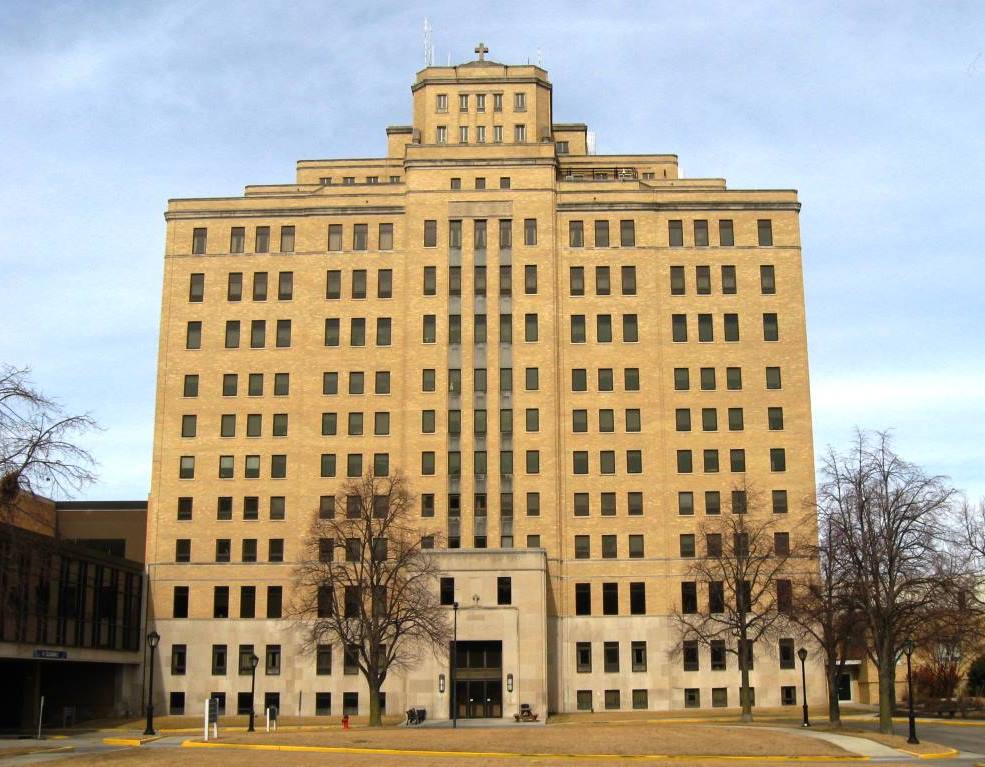 Despite many additions, the Mason Street face of St. John’s Hospital is unchanged from H.R. Helmle’s 1938 design. (SCHS)

Three generations of the Helmle family left their mark on the built environment of Springfield.

The original Helmles in Springfield were George William Helmle, a skilled woodcarver from Germany, and his wife, Elise Marschutz Helmle, who arrived in Springfield in 1851. Over the next century, according to Edward Russo’s 1974 study of the family, Helmle & Helmle, Architects, “the Springfield skyline was shaped largely by this architectural dynasty.”

The best-known Helmles today are George William’s son, George Henry Helmle, and grandsons, George Barrington and Henry Richardson Helmle, who all were part of the architectural firm of Helmle & Helmle. The partnership designed more than 400 buildings, by Russo’s count, including more than 200 homes, 44 schools, nine churches and about 70 office and apartment buildings.

“Since most of their structures are still standing,” Russo wrote in 1974, “it is fair to say that the Helmle family continues to dominate the man-made appearance of the city.”

But George William and Elise Helmle made names for themselves earlier as well. Here is a look at the Helmle family. 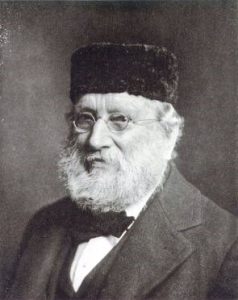 George William Helmle, about 1904 (Past and Present of Springfield and Sangamon County)

George William Helmle (1825-1907), who was known by his middle name, “supplied the ornamental work for a great many of the dwellings and business blocks of this city, doing all the work by hand,” according to his profile in the 1904 Past and Present of the City of Springfield and Sangamon County, written by Joseph Wallace. Also among William Helmle’s works were the stairway of the Executive Mansion and a number of church altars.

Elise Marschutz Helmle (1821-1905) probably was better known in Springfield than her husband. Both were immigrants from Germany, and Elise Helmle had worked in millinery in Paris and Brighton, England, before coming to the U.S. The Helmles met on the ship that carried them both to America and married in St. Louis in 1850. They arrived in Springfield the next year. In the Past and Present, Wallace reported:

Madame Helmle established a millinery store, which she conducted in this city for twenty-five years. She … conducted a fine establishment and had a very large trade, enjoying the patronage of the leading ladies of this city. At that time millinery goods were not usually carried in general stores. She not only possessed artistic taste, as was manifest in her fine millinery creations, but she also had marked executive skill. 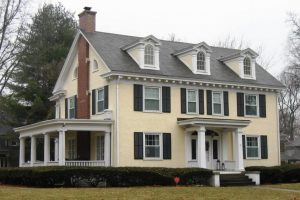 George H. Helmle (1853-1927), the oldest son of William and Elise, began his architectural career helping to rebuild Chicago after the fire of 1870. He returned to Springfield two years later to go into business for himself. Among designs he oversaw were the old First Methodist Church at Fifth Street and Capitol Avenue, the 1878 St. John’s Hospital, part of the Sangamo Electric complex and most new public schools. He also designed homes for many prominent Springfield residents.

He thoroughly understood the architectural beauty and symmetry of building and many of the structures which were the results of his planning were nothing less than poems in mortar, brick and stone.

Under the sons’ administration, Helmle & Helmle continued the older man’s association with St. John’s Hospital, not only drawing up plans for a major hospital expansion opened in 1938, but also designing the St. John’s Sanitarium complex east of Springfield – notably including the dazzling Romanesque St. Francis of Assisi Church. The Helmles also planned several other Midwestern hospitals operated by the Franciscan order of nuns.

George B. and H. Richardson Helmle (the name he used professionally) specialized in business and institutional construction. Among many other structures, they designed the Abraham Lincoln Hotel (built in the 1920s and demolished in 1978), Craemer Hall at Concordia Seminary (now the Illinois Department of Corrections Training Academy), and much of the old Allis-Chalmers plant.

Russo reports that George B., “always a colorful and flamboyant figure,” gradually became the firm’s rainmaker, specializing in wooing clients, while H. Richardson did most of the actual design work.

George B. Helmle, despondent over ill health, shot himself to death in his home near Riverton in 1938. H. Richardson Helmle remained an active architect almost until his own death, of natural causes, in 1949.

The kidnapping of George B. Helmle in Smyrna, Turkey, is a little-known episode in the Helmle saga. Russo’s Helmle & Helmle, Architects apparently provides the only account of the incident.

George B. went to Europe in the early 1900s to study, Russo writes, but he received “hardly the traditional exposure to classic European architecture.” The young Helmle traveled first to Italy and then, with a companion, to Egypt and finally to Turkey. According to Russo:

In the area of Smyrna, George was kidnapped and held for ransom by a Turkish Brigand. George’s father had to pay this ransom. George H. Helmle decided that his son was not receiving an education befitting a young architect, so he called upon friends to pick up his errant son and take him to their villa in Italy for a more traditional architectural education. This experience set the keynote for the type of life which George B. Helmle was to lead.

George B.’s Smyrna experience never made the Springfield newspapers. Russo also doesn’t say how he learned of the kidnapping, although his list of sources includes several friends and Helmle family members.

Charles Helmle: For a brief discussion of a third brother, see comments below. Hat tip to Noble Stockton, a descendant of the Helmle family.

More information: Edward J. Russo’s Helmle & Helmle, Architects, a 32-page paperback, was published as part of the Sangamon County Historical Society’s Bicentennial Studies in Sangamon County History series. It is particularly useful as an examination of the Helmles’ architectural influences and approaches. The pamphlet is out of print, but can be borrowed from Lincoln Library in Springfield.

This entry was posted in Architecture, Business, Prominent figures. Bookmark the permalink.

9 Responses to The Helmle family, architects and builders