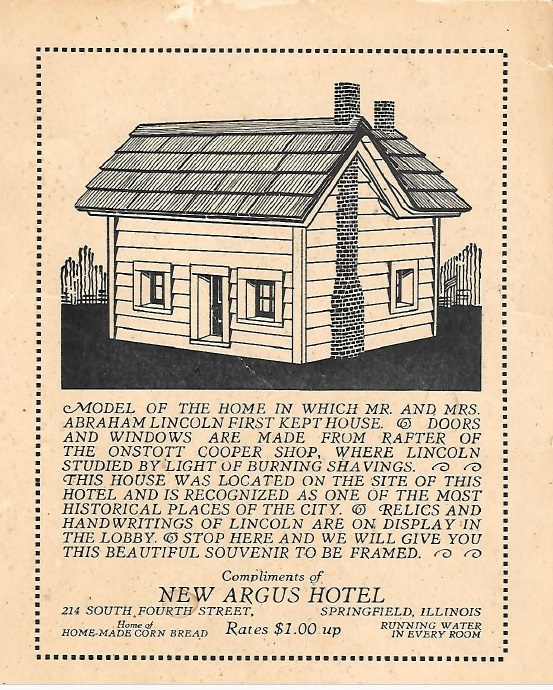 Handbill printed by the Argus Hotel, circa 1930, showing the cottage where Abraham, Mary and Robert Lincoln lived for about eight months in 1843-44. (Sangamon County Historical Society)

Immediately after their marriage on Nov. 4, 1842, Abraham and Mary Lincoln rented a single room at the Globe Tavern, 315 E. Adams St. In the fall of 1843, following the birth at the Globe of their son Robert, the Lincolns moved to a small rented house at 214 S. Fourth St.

Nearly 90 years later, the house’s location became an inducement for people to stay at the Argus Hotel, which by then occupied the site. In a sense, Lincoln really had slept there.

The Lincolns left the Fourth Street cottage in May 1844 to live in their newly purchased home at Eighth and Jackson streets, today’s Lincoln Home National Historic Site.

The house the Lincolns rented on Fourth Street apparently was moved or demolished, without historical notice, in the spring of 1895. An Illinois State Journal ad on May 15, 1895, offered for sale “Cheap – A four room, one story frame house to be moved from lot 214 South Fourth street.” (Editor’s note: The home apparently had only three rooms when the Lincolns lived there. The reason for the discrepancy is unknown.)

The 1895 seller was listed as J.L. Clark, who had a new, larger building constructed at the same address. “Mrs. Clark’s boarding house” was in operation on the site in September. In 1896, the establishment became the Clark House hotel, the name it operated under for about 20 years. After later stints as the Plaza Hotel and the Southern Hotel, the building was renamed the Argus in 1912. 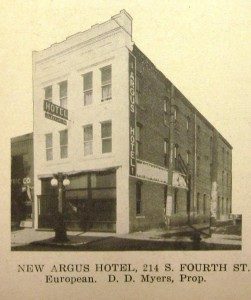 Argus Hotel, 1912 (from Springfield: The Capital of the State of Illinois, courtesy Sangamon Valley Colllection)

Smith wrote that one of the Argus’ regular patrons, J.H. Batterton of Taylorville, happened to read in William E. Barton’s The Life of Abraham Lincoln (1925) that the Lincolns had lived briefly in the tiny house at 214 S. Fourth St. The address, Batterton realized, was that of the Argus.

“The next time he came to Springfield, he told Hotz about it,” Smith wrote. “(T)he proprietor decided to secure, if possible, a picture of the Lincoln cottage for display in his hotel.”

Hotz found that Springfield architect George H. Helmle (whose sons George B. and Henry made up the well-known local architectural firm of Helmle & Helmle) had done a drawing of the Fourth Street cottage. It turned out, Smith wrote, that:

Mr. Helmle as a boy had played around the Lincoln cottage and had remembered how it looked. This, together with information that he obtained as to its dimensions, formed the basis for the drawing. …

The Helmle picture of the house shows that the little dwelling had two windows in the front. On one side was a chimney which was the flue for a fireplace in the living room. The house consisted of a living room, one bedroom and a kitchen. The chimney faced the alley which is on the south side of the Argus hotel.

Hotz had the Helmle drawing copied onto a 5-by-7-inch, heavy-paper handbill that was offered as a souvenir to patrons of the Argus. One of the handbills, shown above, was recently acquired by the Sangamon County Historical Society. (Editor’s note: The handbill’s claim that the house’s doors and windows came from the Onstott cooper shop at New Salem, where Lincoln lived from 1831 to 1837, could not be confirmed.) 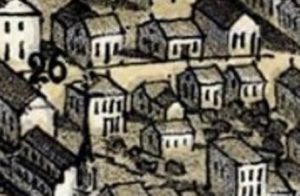 The 200 block of South Fourth Street as shown by Albert Ruger, 1867. The house at 214 is the small one with the rear extension on the near side of the street. (Library of Congress and Dickson College zoomable version)

Helmle’s recollection of the cottage is bolstered by a “birds-eye view” map of Springfield done by Albert Ruger in 1867, which shows a similar small house in the middle of the 200 block of South Fourth.

C.W. Hotz went on to amass a small collection of other Lincoln memorabilia, which he displayed at the hotel and from time to time elsewhere.

Maud Van Arsdall took over the Argus from the Hotzes in about 1935. In 1949, she sold the hotel to R.A. Hose, owner of the Illinois Hotel. He spent a reported $125,000 on renovations and reopened the building as the Capitol Hotel in June 1950.

The hotel, by then basically a rooming house, was torn down in 1985. As of early 2018, the property was a parking lot with a small historical marker next to the sidewalk noting the Lincolns’ brief residency.

After their time managing the Argus, the Hotzes became proprietors of the Bell Arms Hotel (“home for working girls”) at 405½ E. Monroe St., and C.W. Hotz became active in property development in general. 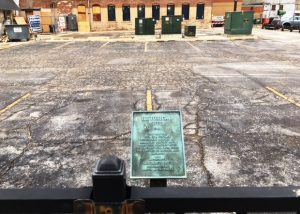 In his later years, Hotz also apparently dabbled in medical mumbo-jumbo. Calling himself “Dr.” Hotz, he promised to treat arthritis pain through “magnetic healing.” When an undercover state investigator took him up on the offer in 1965, Hotz’s treatment consisted of “laying on of hands,” according to Illinois State Journal stories. Hotz reportedly told assistant state’s attorney Richard Hollis that “he transferred electric energy stored in his body to the ailing patient.”

Hotz was fined $275 in March 1965 for practicing medicine without a license.

In his deeply researched A. Lincoln: A Life, Michael Burlingame accepts the 214 S. Fourth St. house as the Lincolns’ residence after they left the Globe and before they bought today’s Lincoln Home. However, in a footnote (Chapter 7), Burlingame notes that another writer, W.A. Evans, in Mrs. Abraham Lincoln: A Study of Her Personality and Her Influence on Lincoln (1932) reported that the Lincolns lived during the interim in “a modest, rented house on Monroe Street.” The statement is not footnoted, however, and the source for the Monroe Street location is unknown.

Evans’ book does include a drawing “from memory” of the Monroe Street house. The drawing, dated 1930, is signed by George Hodgkinson (1875-1943), a state draftsman and landscape engineer. Evans does not say if Hodgkinson drew it from his own recollection – a possibility, although Hodgkinson grew up in Winchester and didn’t move permanently to Springfield until 1918 – or from someone else’s description.

the purported home on Monroe Street, as drawn by Hodgkinson, is almost identical to the Fourth Street cottage remembered by George H. Helmle. (While Evans’ book is readable online, the online version of the drawing is dark, muddy and not very legible. The image is much clearer in Evans’ hardcover book, which can be seen at Lincoln Library’s Sangamon Valley Collection.)

There probably were dozens of very similar homes around Springfield in the 19th century. The similarity between the two images, however, combined with the fact that 214 S. Fourth St. is only a half-block north of Monroe, raises the possibility that both drawings depict the same building – that, in fact, one of the two recollections (probably Hodgkinson or his source) simply got the location wrong.