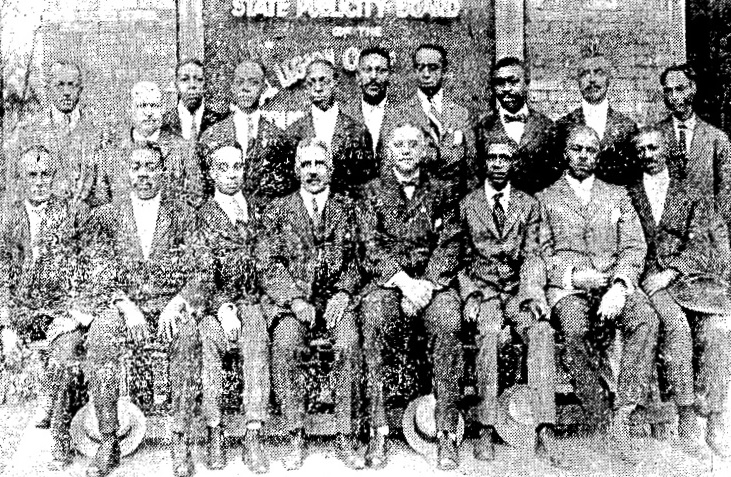 The executive board of the Centennial Co-operative Educational Congress, published in the July 21, 1918, Illinois State Journal. Individuals in the photo were not identified. This photo is part of a three-page advance on the congress (apparently paid for by African-American advertisers) that also profiled more than three dozen prominent black residents of Springfield. (Courtesy State Journal-Register)

Black Springfieldians observed Illinois’ 100th anniversary in 1918 with a three-day conference examining the status, progress and prospects of the state’s African-American community.

Some 3,000 people attended the Centennial Co-Operative Educational Congress, held Sept. 22-24, 1918, at the Illinois State Arsenal. (The dates were chosen because Sept. 22 was the anniversary of President Abraham Lincoln’s issuance in 1862 of the preliminary Emancipation Proclamation.)

The “cooperative education” theme of the congress referred to the need to educate both whites and blacks about the importance of the two races working together, according to an elaborate three-page announcement of the event published in the July 21, 1918, Illinois State Journal.

The congress was expected to recommend creation of a permanent commission to deal with “all matters touching the relations of the white and colored people … with the race problem in all of its phases placed in the course of an ultimate harmonious solution,” the announcement said.

Conference speakers included both blacks and whites. The first day’s keynote was delivered by Col. Roscoe Conkling Simmons, nephew of African-American educator Booker T. Washington. Simmons’ speech focused on the sacrifices of black soldiers then fighting in World War I.

Besides the Arsenal discussions, conference highlights included a parade from the black Masonic hall at Eighth and Washington streets to the Arsenal. The most notable entries, the Journal reported, were those depicting cotton picking and a slave ship.

Riley noted the “spirit of lawlessness and lynchings, the disregard of the rights of the black man.” However, he added:

It is true that the negro as yet has not adapted himself to the rigors of our civilization and the attendant vice, crime, disease and death that statistics pile up against him are simply Nature’s clumsy way of eliminating the unfit. There is a better way, a more simple and direct way to overcome these evils and that is by consciously directing the forces that are to accomplish the better adjustment of the negro race to this strange environment. He is here to stay and we must take the responsibility of directing him.

Controversy also centered on the man who came up with the idea for the congress, Zedekiah Mitchell, who was usually known by his initials, “Z.W.” City directories suggest Mitchell (1867-1930) lived in Springfield from about 1917 through 1920. Although listed in the 1917 directory as a laborer, Mitchell also sometimes styled himself a professor (which he might have been qualified to do; it wasn’t uncommon at the time for educated African-Americans to have to support themselves as manual or domestic workers).

At any rate, in addition to his work on the cooperative education congress, Mitchell was among the leaders of an effort to create a community center for black Springfieldians.

However, the NAACP’s magazine, The Crisis, published a story in May 1918 that labeled Mitchell a fraud.

In a letter to the Illinois State Journal referencing The Crisis article, C.B. Hosmer, field representative for Washington’s Tuskegee Institute, wrote that Mitchell had made a living for 30 years throughout the U.S. and Canada by raising money to open social centers “for the young colored people.” However, Hosmer wrote,

(H)e always managed to leave the communit(ies) directly after his welcome wore out.

In other words, I have long since been convinced that this man Mitchell is an intelligent fraud, fake and dishonest fellow, who has the “gift of gab,” and sincerely feels that the world owes him a living. …

The Centennial board (colored), a very worthy effort, is being greatly burdened by Mitchell’s connection with it.

Hosmer’s letter appeared in the Journal on Sept. 13, 1918, just nine days before the centennial congress opened. Perhaps as a result, Mitchell went unmentioned in the newspaper’s coverage of the congress.

Following the congress, legislation was proposed in the General Assembly to create a state division of cooperative education. That idea apparently was never enacted. However, some of those involved with the congress, including Riley, Illinois Centennial Commission Chairman Hugh Magill, Mayor Charles Baumann and others, moved ahead with plans for an African-American cultural and social center in Springfield.

Notwithstanding the NAACP’s suspicions, Mitchell also remained the key organizer of the proposed community center. In November 1918, separate white and black governing boards agreed to create the center in a building at 12th and Monroe streets. The deal called for Springfield’s black community to pay the rent and upkeep for the building. The center’s white supporters pledged to raise $3,500 to pay Mitchell’s salary as executive secretary and to hire a stenographer and pay for educational literature.

“Mr. Mitchell is to devote his entire time and energies in carrying out the program approved by the white and colored boards,” according to an announcement in the Journal.

The 1920 Springfield city directory and U.S. Census both show Mitchell and his family living at 1127 E. Monroe St. The U.S. Census the same year lists Mitchell as an educator employed by a “community house” and Mitchell’s wife, Lorena, as “matron” of the community house. The census describes the couple’s 24-year-old daughter, Beulah, who lived with her parents, as a teacher.

The building at 1127 was listed as “Colored Social Center” in the 1921 and 1922 directories, although the Mitchells apparently had moved on; the building also was the residence of Albert Robinson, a teamster, according to the directories. The social center listing was gone by 1923, and another family lived at 1127.

The Mitchells also disappear from city directories after 1920. Z.W. Mitchell’s later activities are unknown, but ancestry.com and findagrave.com both report that “Zedikah” W. Mitchell (wife Lottie) died in the Metro East area in 1930.

However checkered his career otherwise, Mitchell’s work did have a lasting impact in Springfield. In 1926, city government and the black community established the Douglass Community Center, which would continue to serve local African-Americans for 30 years.

The “community center movement for Negroes in this city,” Douglass center executive secretary O. Jerome Singleton wrote in 1933, was due to “the leadership of Z.W. Mitchell, now deceased.”