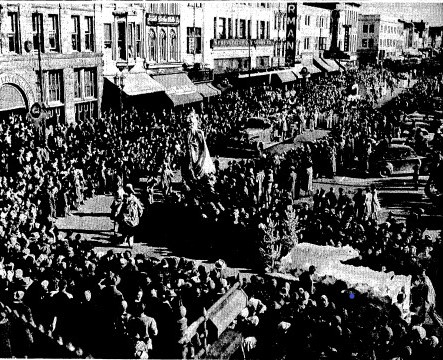 Correction: This entry has been retitled. The first Christmas parade (smaller and less formal) in Springfield was held in 1914. You can read about it here. Embarrasssed apologies from SangamonLink’s editor, who wrote both entries, for forgetting the first one. And a big hat tip to reader/contributor Chuck Stone, who remembered it. Thanks, Chuck.

The headline personalities – Santa, his wife “Mary Christmas,” real reindeer, and an elf band – fit the Christmas theme. So did, arguably, “Dr. Wolf and his Eskimo dogs” and several authentic Inuit.

But, in full-page ads in advance of the parade, the sponsor, the Illinois State Journal, also promised “the big giraffe,” a 20-foot long dachshund, and “75 grotesque fairyland characters.”

“Almost every kind of animal was represented,” the paper said in its story the day after. “There also were walking trees and a myriad of weird forms which lent the occasion a touch of the unexpected.” (All, presumably, were papier-mache creations.)

The parade was a massive success, even though Dec. 5 was a Thursday. Schools closed for the afternoon so children could attend the parade; many were bused downtown, the paper said.

Traffic on the streets … was jammed for nearly an hour as automobiles stood in lines for many blocks. Throngs lined the curbs and in some cases completely blocked the sidewalks.

More importantly for the Journal and its advertisers, the parade attracted customers to downtown stores that, a month after “Black Thursday” kicked off the Great Depression, probably needed the help.

Merchants of the city reported unprecedented sales following the parade. Instead of returning directly to their homes, the many housekeepers and others took the opportunity to do some shopping. Until late in the afternoon the stores were crowded with the buyers and at sunset the downtown district still held its festival air.

The parade was repeated in 1930. That time, Santa was accompanied by, among others, a Japanese man pulling his wife in a rickshaw, a Dutch couple with their oxcart, and an Italian family demonstrating a hurdy-gurdy.

Most often in the ‘30s, one of the downtown stores, such as W.T. Grant or Sears, arranged to have Santa arrive in town, usually at the Chicago & Alton train depot on Third Street. Kids were invited to “parade” to the store along with Santa, who would hand out candy and hear children’s Christmas wishes. 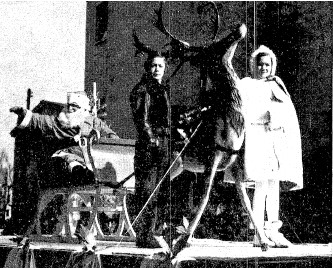 Full-fledged parades resumed in 1938 and continued through 1941 (that year’s parade was held Nov. 22, two weeks before the attack on Pearl Harbor). In those years, Santa’s arrival, often on the Saturday after Thanksgiving, marked the official beginning of the Christmas shopping season – it was considered tasteless for stores to put out holiday decorations earlier.

Despite the beginning of the war, Springfield recreation director John McWherter (he later served a term as mayor), managed to organize a “curtailed” parade in 1942. 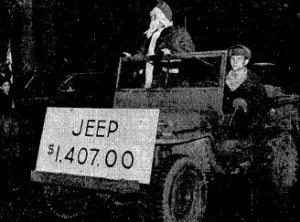 Journal archives, however, show no official Christmas kickoff event in 1943, and in 1944, local officials tied the start of the Christmas season to a War Bond parade. Santa arrived in a Jeep bearing a sign that, helpfully, showed how much it cost to produce the vehicle — $1,407.

A new tradition began in 1945 – instead of an elaborate parade, a smaller procession took Santa from the train station to his Santa House on the southwest quadrant of the downtown square. There, he would receive children’s Christmas lists amid lighted Christmas trees and carols playing from a loudspeaker in the courthouse rotunda.

Parades finally resumed in 1949, and this time they became an annual tradition.

At the 1950 parade, however, some onlookers earned themselves coal in their stockings. The parade took place during a blizzard on Dec. 5, 1950. Journal reporter Joan Metzger described the sad result for both Santa and many of the waiting children.

Last night’s heavy snow provided an appropriate and effective white background for the annual Jaycee Christmas parade, but it also provided ammunition with which young “humorists” shelled Santa Claus out of the parade. …

Final float in the parade was Santa’s sleigh, mounted on a large vertical circular float. There, for all Springfield children to see, were the two prancing reindeer, and the glistening white sleigh, with Santa’s red robe still flung across the seat. But Santa, for at least half the parade, had been forced out by the snowball barrage. And more than one child who had stood in the snow for an hour to see “Santy” was led away a little confused. It had been the Christmas parade, with snow and everything, but to many children Santa’d been nowhere to be seen.