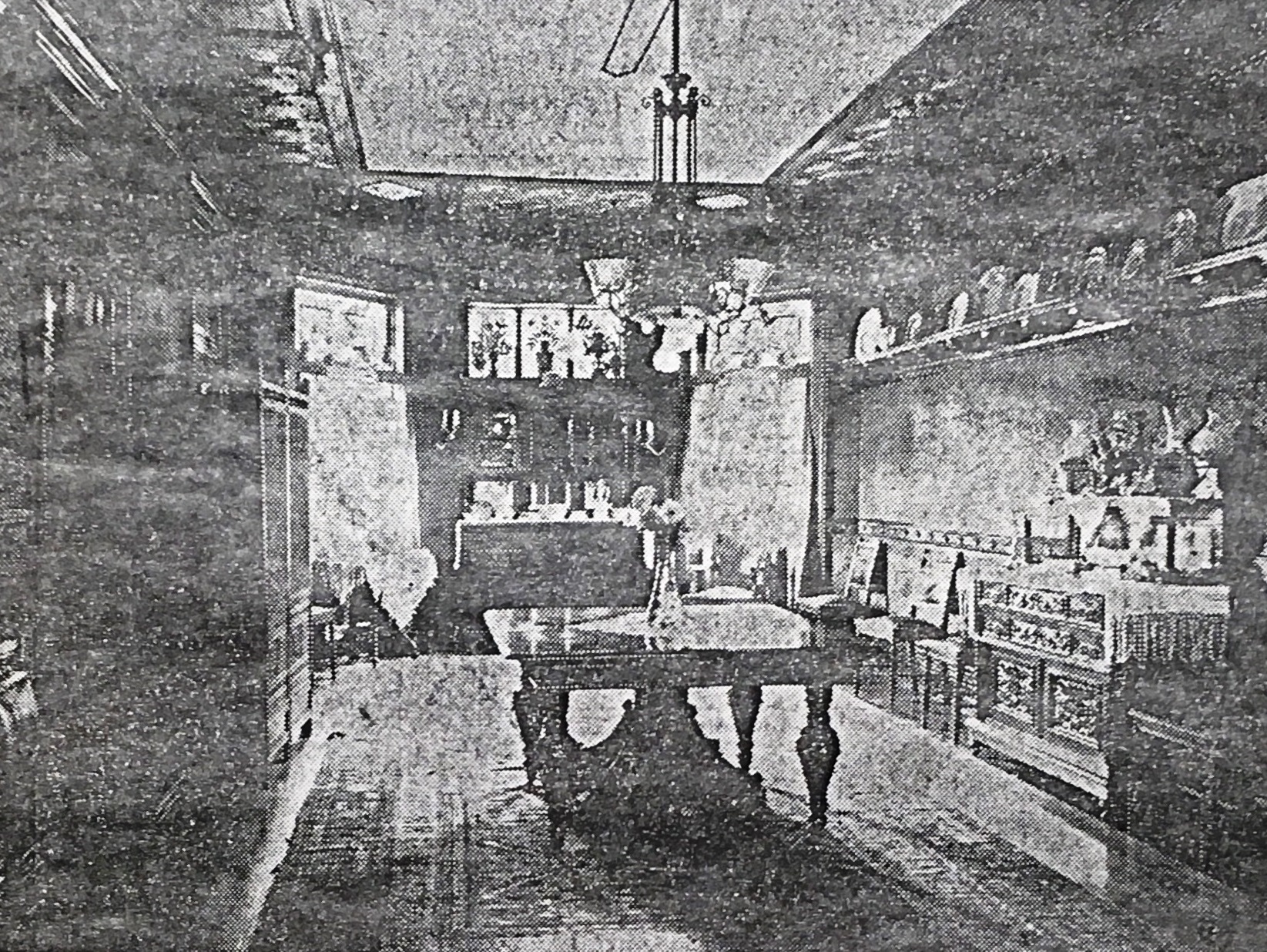 The dining room of the Frank W. Tracy house, taken from a newspaper clipping, titled “The Family Album,” in the Sangamon Valley Collection. No source or date is given for the clipping, but the item was published sometime before the death in 1954 of Louise Tracy Lester, probably in the Illinois State Register. A handwritten note suggests the original photograph was taken in 1879, which would have been before the room was equipped with electric lights. (SVC)

The first Springfield home to be equipped with electric lights reputedly was the palatial residence of Frank and Sarah Jones Tracy.

It’s not clear when Frank W. Tracy, a banker and civic leader, had the lights installed. The date probably was  in the 1880s, while Springfield was still getting used to electric lights on streets and in businesses.

Getting Here, a 100th anniversary pamphlet published by City Water, Light and Power in 2011, gave this account of Tracy’s unveiling of his new lights:

In Arthur D. Mackie’s history of the Springfield Gas and Electric Company, Mackie wrote of being “told by E.A. Hall, who was a guest at a dinner given by Mr. Tracy in celebration of the electric lights, that the entire ceiling of the dining room was studded with electric bulbs and … the guests sat in the room in fear and trembling, expecting to see the ceiling burst out in a mass of flames any second.”

However, that did not deter them from enjoying the feast and the good things that went with it in that day – before Old Man Volstead was heard of. (See editor’s note below.)

The cutline accompanying the photo above of the Tracys’ dining room added,

Mrs. (Louise – ed.) Lester, daughter of the late Mr. and Mrs. Tracy, tells us that the walls being of brick and eight inches thick all through the house, the entire electric installation was “external and the lights had to be “pulled on by cords which hung from the ceiling.”

The home, which was at 1131 S. Sixth St., was razed in 1942. Illinois State Journal writer Beulah Gordon covered the demolition.

When the Tracys and their four children lived in the home, Gordon wrote,  “the three-story, twenty-one room brick house was the scene of some of the most brilliant social affairs in Springfield.”

The dining room, one of the largest in Springfield, extended the width of the house, and spacious doors opened off the south side on a conservatory filled with beautiful flowers, in which a fountain played constantly.

The mahogany table, which seated fifty people, was built for the dining room and the table cloth was made for the table.

The widowed Louise Tracy Lester (1869-1954) lived in the house until 1933, but it had been vacant for nine years when it was finally torn down. 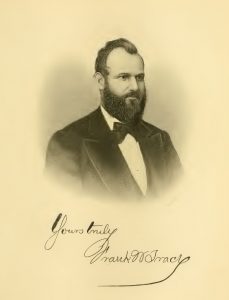 Tracy had investments in railroads, several local manufacturers (including Sattley Manufacturing, Franklin Life and the Illinois Watch Co.) and held a number of state and national banking posts. He also served terms as a city alderman and member of the Springfield School Board.

Tracy’s interest in electricity went beyond his own dining room. In 1894, he led the effort to form the Capital Electric Co., whose 60 investors financed construction of a power plant designed eventually to be turned over to the city. In return, Capital Electric was given the city street lighting franchise under terms that more or less guaranteed a profit for the investors. Tracy became president of Capital Electric.

Although it ended in controversy, the deal basically worked out for both sides.

Editor’s note: Arthur D. Mackie (1875-1938) was in a position to know about Tracy’s lights. Mackie managed all of Springfield’s private utility services – electricity, gas and street car/bus transportation – from 1913 until his death.  Neither the Sangamon Valley Collection at Lincoln Library nor the Abraham Lincoln Presidential Library has a copy of his history of the Springfield Gas and Electric Co.