Thomas Harrison, “the boy preacher,” was well past boyhood when he arrived in Springfield for a revival series in January 1886. It’s not clear, in fact, that he was ever that boyish in the pulpit – Harrison, born in Boston in 1854, doesn’t seem to have begun a full-time evangelization career until he was in his early 20s.

Nonetheless, he apparently found the “boy preacher” label a worthwhile marketing gimmick. And whether for that reason or others, his Springfield revivals, held at First Methodist Episcopal Church, Fifth Street and Capitol Avenue, indeed were a success. 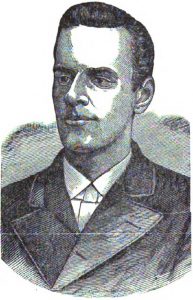 Thomas Harrison, “the boy preacher” (History of the Harrison Revival)

Harrison had been scheduled only for a five-week local preaching stint, but the series ended up lasting 15 weeks, until May 2. Harrison might have stayed even longer, reports suggested, but a delegation from Topeka, Kansas, came to Springfield to warn that the weather there would soon be too warm for the next revival on Harrison’s schedule.

The Illinois State Journal and Illinois State Register regularly reported on the prayer meetings, but the most comprehensive coverage was in Springfield’s third newspaper, the Sangamo Monitor, where the city editor, Charles Kalb, was especially enthusiastic. Before the revivals were even over, Kalb rewrote his coverage into a pamphlet, History of the Harrison Revival at the First M.E. Church, Springfield, Illinois (1886).

Most of what we know today about the revival comes from Kalb’s book. It tells who spoke at each service (usually there were two or three other ministers in addition to Harrison), what hymns were sung, who the organists were and what Gospel verses the speakers chose. Kalb diligently reports how many people came to the altar each night in response to Harrison’s call and how many of those accepted conversion. He even provides a detailed history of Methodism in Springfield, describes the design of the First Methodist’s one-year-old church building, and presents a list (with three addendums) of  the church’s members.

What History of the Harrison Revival does not do, unfortunately, is explain why Harrison was so successful. Kalb gives only brief quotations from Harrison’s sermons, and most of those are standard 19th-century Bible exhortations. (In fairness, it’s often impossible to translate a compelling speaker’s appeal into print.) The best description Kalb gives of Harrison is early in the pamphlet:

The secret of his success does not lie in his fine oratory nor pure diction, but in his thorough consecration to his work and strong faith in God. He is small in stature, with smooth face. His lithe, slender form, youthful appearance and the early age at which he commenced his evangelistic work have won for him the name of “the boy preacher.” He is a rapid, nervous speaker, walking continually, back and forth on the rostrum during his entire discourse. He possesses great magnetic power, which holds the attention of his vast audiences with deep interest, although the church may be uncomfortably crowded.

A total of 2,020 people ultimately declared their conversions before the series finished. 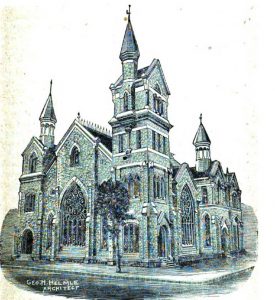 First Methodist Church shortly after construction in 1884-85. Architect George Helmle designed the church at no cost. The building was demolished in the 1970s. (History of the Harrison Revival)

“Tonight our highest expectations are more than realized,” Harrison said as the revivals were ending. “This church has been crowded. The community has been lending its ear. The whole city has been under the shock of the revival influence.”

In an editorial published May 2, the Register agreed: “This revival of religion is one of the most remarkable that was ever known to the western country,” the newspaper said.

“The boy preacher” continued evangelization for some time after his Springfield revival. It is unclear when and where he died.

To State Journal-Register reporter and columnist Tamara Browning, who brought the Harrison Revival to our attention via a Nov. 5, 2017 story about the 110th anniversary of Hope Evangelical Free Church, 3000 Lenhart Road. Hope Church, founded in 1907, claims a tie to the Harrison Revival – one of the church’s first homes was in a building at 16th and Carpenter streets that, according to Hope Church researchers, was an after-effect of the revival.

The 16th and Carpenter building was constructed in 1889 by a local grocer and philanthropist, William Brewer (1838-1904), as a mission outpost and for the Sunday School of First Congregational Church. If the Carpenter Street Mission (the building’s original name) was inspired by the Harrison Revival,  however, it took three years to come to fruition. (The SJ-R article said incorrectly that the revival also was in 1889.)

Hope Church first held services in the home of a coal miner and German immigrant, Conrad Numrich (sometimes also spelled Numrick), at 1835 Renfro. Browning reported the congregation moved into the former mission in 1913.

Numrich (1877-1922), who served for a period as Hope Church’s Sunday School superintendent, moved to Wyoming to homestead about 1917. He is buried there.

Charles E. Kalb (1861-1904), chronicler of the Harrison Revival, was born in Barclay and worked as a reporter and editor at the Sangamo Monitor in the 1880s. In the 1890s, he became a minister and evangelist in Kansas. He later returned to Illinois, where he ministered at Presbyterian churches in Menard County and then in Chatham, Bates and Buffalo Hart.

“He was quite successful as an evangelist, and held revival meetings at a number of churches in this region,” the Illinois State Journal said in his obituary.

Kalb died of pneumonia while living at the Lavinia Beach mission in Ridgely, then a northside suburb of Springfield. Kalb is buried at Oak Ridge Cemetery.

This entry was posted in Churches, Media, Spectacles. Bookmark the permalink.