A group of Springfield newspaper carriers, with bicycles sporting Fisk tires, pose in front of the Fisk outlet in the 300 block of South Fourth Street, circa 1917. Several of the carriers sport lapel pins that suggest they also may have been licensed as street vendors. (Sangamon Valley Collection)

When a newsboy stiffed Mayor Charles Baumann out of 2 cents change, Baumann ordered city police to dismantle every news stand in downtown Springfield. But the newsboys had allies of their own, including an influential group of civic-minded women.

The short-lived imbroglio began on May 12, 1921, when Baumann (1869-1924) gave a newsboy – later identified as Jimmy Doud – a nickel to pay for his 3-cent newspaper. Doud kept the change, and, for some reason, Baumann didn’t object at the time.

The next morning, however, Baumann ordered police officers to overturn the news stands. With a touch of sarcasm, the May 13 Illinois State Register’s banner headline was “Mayor Begins Clean-Up – Of Newsboys.”

Police, acting on orders of the mayor, this morning forced all newsboys to take their papers from the downtown news-stands and working in pairs overturned every stand.

“They charged five cents for a paper,” the mayor said, explaining his order.

At first, circulation workers for the Register and Illinois State Journal thought the overturned stands were the work of “early morning jokesters” and set them back up. Police officers then returned and upended the stands a second time.

“At Fifth and Monroe the police were met and the true situation learned,” the Register reported later.

The stands apparently were freestanding wooden boxes that protected the newsboys’ goods from the weather and allowed them to display headlines and front pages. (The newsies sold national magazines as well as local and out-of-town newspapers.) One story during the dispute described the stands as “boxcars.”

It’s not clear how many stands were affected, but at least one stand stood on all the “principal” downtown corners; that suggests Baumann’s order affected at least a dozen news stands, probably more. (There were still a dozen news stands downtown as of 1940, including four at “Dodds’ Corner,” the intersection of Fifth and Monroe streets,)

However many stands there were in 1921, the trade must have been reasonably lucrative for the young salesmen: the city of Springfield, which licensed newsboys (see below), annually issued anywhere from 50 to more than 200 licenses.

In addition to griping about his lost 2 cents (which Jimmy Doud returned as soon as the dispute began), Baumann called the stands unsightly and suggested established bookstores had complained about the newsies’ magazine sales. The merchants denied that.

Baumann added that he had been told the stands were controlled by a mysterious out-of-town corporation.

“This ‘corporation’ has never asked permission for any of the boxes to be place on the street corners,” Baumann said. “They do not belong to the local newspapers.”

The papers, for obvious reasons, were on the side of the newsboys. While they played their coverage mostly straight, they had no qualms about contradicting the mayor when they could. The Register’s May 13 story added a little context.

The mayor in his order today takes first cognizance of a condition that has prevailed for years. Newstands (sic) were first placed on the corners about five years ago, following the examples of newspapers in larger cities. They were found to be such a great convenience that the two Springfield newspapers, at considerable expense, placed others out. The whole question is one of convenience to the public and the newsboys. …

One well known policeman, whose name is not mentioned here for fear the mayor would take action against him for questioning his orders, addressed customers in Mueller’s cigar store this morning as follows:

“Well that’s the fifth time I’ve ordered the boys off those boxes. I’d like to have somebody explain to me which is the most unsightly: those boxes all neatly stacked with papers or the sidewalks with papers lined up for twenty feet and weighted down with bricks.”

The papers also played up the Horatio Alger-like aspects of the confrontation, with the Journal resorting to an unlikely Brooklynesque dialect when it quoted one newsie.

Indicative of how the newsboys feel is seen in the remarks of one of the little urchins late last night.

“Do you keep a stand here?” he was asked.

“Was it knocked down today? Why isn’t it up now?”

Not hearing or understanding, the boy fumbled to offer a paper for sale from piles stretched out along the curb held down by brick weights.

With this, the little chap in striped shirt and knee pants began shouting, “Poiper – poiper here! Read all about the mayor’s big drive on the newsboys.” 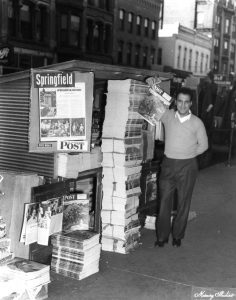 A news stand near Fifth and Monroe, 1949 (Sangamon Valley Collection)

The Register reported receiving hundreds of phone calls and letters in support of the newsies, and Baumann’s news-stand ban lasted only two days. The boxes were allowed to reopen on Sunday, May 15, following a meeting involving Baumann, a group of newsboys, the newspapers’ circulation managers and George Seidler, whose agency brokered the out-of-town papers and magazines, and representatives of the newsboys’ committee of the Springfield Improvement League.

Baumann, a pharmacist who was elected mayor in 1915 and re-elected in 1919, lost his race for a third term to Samuel Bullard in 1923. Newspaper records give no indication that the news-stand controversy played a role in the campaign.

The all-woman Springfield Improvement League may have been the newsboys’ most effective advocate.

The league was formed in March 1915, after some of its members got close-up looks at local social conditions while helping with the 1914 Springfield Survey. The survey didn’t deal specifically with newsboys, but it did find that child labor laws in general were being widely ignored.

One of the league’s first steps was to lobby the city council to license newsboys. The council unanimously adopted a licensing system on May 8, 1916.

“We are simply trying, through the aid of the police department,” a league spokeswoman said, “to break up the habit of allowing children of tender age to engage in the business and also to keep boys off the streets at night, when they should be in their homes.”

Under the new regulations, newsies had to be at least 10 years old (later 11), had to have parental permission, could not work after 9 p.m. except when selling late-breaking “extras,” and had to be of good character (the league’s newsboy committee had the last word on that). A license originally cost 25 cents, although the fee was increased to 50 cents a few years later. Each newsboy had to wear his city-issued badge while working.

Few, if any, girls sold papers on the street, although a 1917 photo of about 20 children who delivered newspapers via bicycle includes two girls. The licensing system apparently did not apply to route deliveries.

The Improvement League also created a savings program for the boys, set up a newsboys’ self-government group and sponsored baseball and basketball teams. The league, and later the American Business Club, held annual Christmas dinners for the boys.

At one point in 1916, the league apparently even paid for tonsillectomies for two of the newsboys. According to a Register story on June 18, 1916:

The women of the Springfield Improvement league are trying out one of the latest theories of medical science, the removal of adenoids and diseased tonsils in order to help insure good behavior among boys. The theory is that most boys are bad because they do not have good health, and that poor tonsils and adenoids is one of the chief causes.

The Improvement league members, who are acting as “mothers” to the newsboys of the city, have tried out the plan with success in two instances.

The committee’s efforts didn’t solve every problem. Statistics presented to the city council in 1922 said that, of 82 newsboys licensed at the time, 36 of whom were “regular sellers,” 17 had been charged with misdemeanors, and 11 had been cited for not attending school.

Lucy Dickerman (1877-1955) and Effie Oldfield (1874-1937) were the league’s representatives in talks with Baumann to lift his news-stand ban. Dickerman was active with the newsboys’ committee throughout its existence (the league apparently disbanded about 1935). She and Marie Moore Smith (1881-1966), Springfield’s first female city clerk, were specifically recognized at what might have been the newsboys’ last holiday fete in 1942.

Beyond the newsboys, the Improvement League was instrumental in creation of Springfield’s infant-health clinics, another offshoot of Springfield Survey findings.

But the league’s first big project was a city cleanup held in April 1915, a month after the group was founded.  Both newspapers listed the league’s “commandments” for a cleaner Springfield.