Update note: Sangamon County’s memorial to those who died in World War I was moved from First Street and North Grand Avenue to the war memorials section of Oak Ridge Cemetery in September 2019. Wording was added honoring all Illinoisans who served in the Great War, making the local memorial eligible for placement in the cemetery – see below.

As part of the relocation, John Kerasotes was finally identified as the person who created and funded the memorial column.

In addition, the sign bearing Abraham Lincoln’s “It will become all one thing” quotation was removed from the corner in late 2018. In fall 2019, the southeast corner of First and North Grand was distinguished only by the “Bob Vose Corner” sign, a decorative street lamp and a tidy landscaping layout. (Cemetery director Mike Lelys said the “all one thing” sign, which had deteriorated, was given to Vose. See below for more on both signs.)

SangamonLink has created a new entry for the World War I memorial. However, this original entry has been preserved to show how the corner changed over the years.

Sangamon County’s memorial to those who died in World War I sits, mysteriously, on a tiny lot at the southeast corner of First Street and North Grand Avenue.

In a mish-mash of uncoordinated commemorations, however,  the corner as of October 2017 also recognized a former Springfield alderman and an obscure Abraham Lincoln quotation.

The easiest symbol to explain at First and North Grand is the red, white and blue metal sign that designates the site “Bob Vose Corner.” 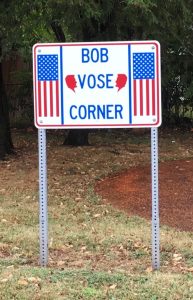 After serving three terms (1987-99) as alderman from Ward 5, Vose, who lives nearby, became the unofficial caretaker of Monument Avenue (the northern extension of First Street). He raised money for banners and signs and personally tended trees and flowers in the parkway.

He also lobbied successfully for state funds to beautify Monument Avenue, which serves as the gateway to the Lincoln Tomb State Historic Site.  (Before any of the current symbols were erected on the corner, in fact, it was distinguished by large white concrete letters set into the ground that said “Abraham Lincoln Tomb.” An accompanying wooden sign directed people to the tomb.)

It will become all one thing – A. Lincoln

A long wooden sign that contains a partial quotation from Lincoln’s “House Divided” speech is a leftover from a sculpture that lasted only seven years at First and North Grand.

Lincoln delivered his famous speech at what now is the Old State Capitol on June 16, 1858. For context, here is a longer portion of the speech.

A house divided against itself cannot stand.

I believe this government cannot endure, permanently half slave and half free.

It will become all one thing or all the other.

Either the opponents of slavery, will arrest the further spread of it, and place it where the public mind shall rest in the belief that it is in the course of ultimate extinction; or its advocates will push it forward, till it shall become alike lawful in all the States, old as well as new — North as well as South. 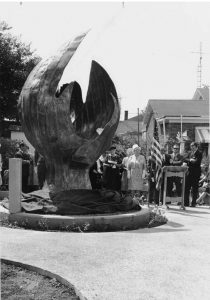 The sign was erected on the corner in 1966 as part of a sculpture project funded by the Ladies of the Grand Army of the Republic. The sculptor, Tony Vestuto (1929-2013), then a professor at Illinois Wesleyan College in Bloomington, designed a giant pair of praying hands as the main element of the sculpture.

The hands were made of steel. Vestuto envisioned they would be fabricated of a special type of steel, Cor-Ten, which is resistant to corrosion. The idea was that the hands would gradually acquire a thin layer of rust, giving them a distinctive reddish-brown patina. Unfortunately, State Journal-Register reporter Steve Hahn learned in 1978, Vestuto’s contractor used the wrong steel. Vestuto told Hahn:

I remember the whole thing. I made the statue out of Cor-Ten steel and there was a big hassle with U.S. Steel and everything.

There are two types of Cor-Ten steel, A and B. A lasts forever and that was the kind we were supposed to get. The company said B lasts only seven or eight years if it is continually exposed to the elements. We got Cor-Ten B by mistake and they were right, it lasted seven years almost to the day.

The hands were rusted out to the verge of collapse when they were removed in 1973. Vestuto took the piece with him to Indiana, where he lived at the time. He told Hahn he hoped to restore the piece and erect it on his farm.

It is unknown if that ever took place, but the “all become one thing” quotation remained on the corner in 2017, as did the low round pedestal where the praying hands once stood. A street lamp stood in the middle of the pedestal.

The obelisk bearing the names of 113 Sangamon Countians who died of wounds or disease as a result of service in World War I is puzzling in a couple of ways. For starters, the name of the person who commissioned it has never been revealed. 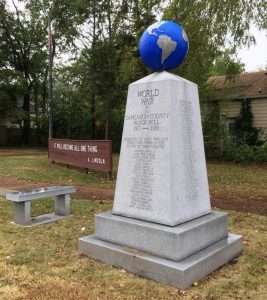 Joe Bartolomucci, one of Vose’s successors as Ward 5 alderman, told the Illinois Times’ Job Conger in 2003 that “a gentleman who wanted to remain anonymous” contacted Bartolomucci about finding a site for a memorial to Sangamon County’s World War I fatalities. The man wanted it in or close to Oak Ridge Cemetery, Bartolomucci said.

LuAnn Johnson, then the cemetery’s director, said officials there wanted to restrict war memorials only to those recognizing veterans from throughout Illinois. “If we had one county monument, we might get requests for another hundred county monuments,” Johnson told Conger.

Bartolomucci said he was working on a plan to erect the memorial on a small part of the Sangamon County parking lot at Eighth and Adams streets when the obelisk suddenly appeared at First and North Grand. “I thought we had a pretty good spot, but apparently the gentleman didn’t think so.”

Mayor Tim Davlin approved the First and North Grand site, which is maintained by crews from Oak Ridge. However, street parking isn’t allowed at the corner, so visitors – the few there are – must park in lots across the street.

The memorial, about a seven-foot granite obelisk topped by a world globe, also cut from granite, apparently was designed by the donor, Conger wrote. Two small granite benches sit on either side of the obelisk.

The front of the memorial, which faces North Grand, says: “World War I/Sangamon County Honor Roll/1917-1919/Dedicated to those who lost their lives while in the service of their country.”

The book includes short biographies of 110 of those 133, along with photos of most of them. The Honor Book’s volunteer researchers, however, apparently were unable to come up with information on 23 other World War I fatalities. They are simply listed by name at the end (page 1078) of the “In Memoriam” section.

Both the Honor Book and the memorial, incidentally, include the name of Geneva Casstevens (1891-1918), a registered nurse who is considered the only Sangamon County woman to have died as a result of the war. Like some of the men who died, however, Casstevens’ connection to Sangamon County was minimal. 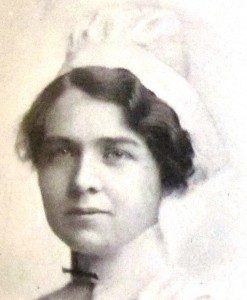